This “whey” to make vodka could add value to creameries, lessen environmental impact

CORVALLIS, Ore. – As much as 90 percent of the milk that goes into a cheese-making facility comes out as whey, which can be expensive to dispose of in landfills and potentially harmful to the environment.

Large companies can turn a nice profit by turning some of that whey into protein powders and other nutrition-enhancing products – but the equipment is too expensive for most artisanal creameries, researchers say. However, a new movement is emerging as some of these smaller companies are exploring whey-based “spirits” – namely, vodka.

Not only are cows now a potential cog in the distilling process, the environmental impact is far less damaging than dumping whey into a landfill, according to studies at Oregon State University.

“Even though some energy is required to transform whey into vodka, there is still a huge environmental gain by not disposing of it through waste streams,” said Lisbeth Goddik, a professor of food science and technology at OSU and holder of two endowed professorships. “There is a significant reduction of greenhouse gases, and the creameries have the potential to also boost their revenue.”

A handful of companies already are producing “vodka from whey” products and Goddik, along with Paul Hughes of OSU’s fermentation science program, are conducting research on the flavor characteristics of different wheys and the spirits they produce.

Most of the whey in the United States is “sweet whey,” which comes from the process of making cheddar, mozzarella and Swiss cheeses. “Acid whey” is produced from making cottage cheese and Greek yogurt, Goddik said, and its disposal is particular challenging.

But not when they are converted into alcohol.

“Both types of whey ferment and distill beautifully,” said Hughes, who leads the burgeoning distilling program at OSU. “Our chemical flavor analysis suggests some differences between the two wheys and eventually we hope to isolate more of the chemical compounds and match them with flavor characteristics.”

Acid whey distillate in particular has a lot of terpenes, which are unsaturated hydrocarbons also found in beer and wine. Common in many plant products, the terpenes originate in the grass cows eat, yet the whey – and the distilled products that result – don’t taste “grassy,” Hughes said.

The OSU researchers say that distilling whey to make spirits could be done more easily and inexpensively than, say, converting whey to protein powder. The process of distilling could be done by individual artisanal creameries, or a number of creameries could create a cooperative to turn their whey waste into spirits.

The impact could be significant. Goddik said Oregon has 22 artisan cheesemakers, Washington has about 70, and there are approximately 1,700 in the United States. Oregon, alone, produces roughly 2.6 billion pounds of milk annually.

“Cheese companies used to spread whey on fields, feed it to animals, and dispose of it in landfills,” Goddik said. “Neither is a great solution. Even if you decide to ferment the whey and then dump it down the drain, there is less damage to the environment. But why do that if you can create a value-added product?”

Hughes said the distilling industry has shown a keen interest in OSU’s research into whey products and taste characteristics. “We’ve never had this much interest from them since we started our distilling program.”

OSU graduate student Derrick Risner led the studies of the environmental impact of whey and found that whey has a high level of “biochemical oxygen demand,” or B.O.D. In essence, the high nutrient level can lead to more algae production in streams, and a decrease in the water’s oxygen levels, among other environmental impacts.

Results of the whey environmental impacts study have been published in the Journal of Dairy Science. 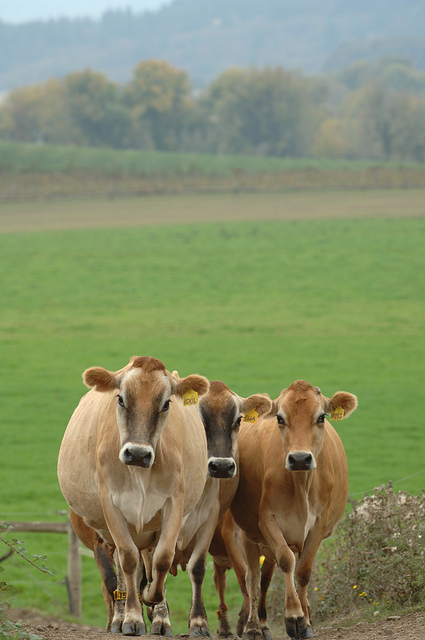