2018 one of worst low-oxygen years for ocean off Oregon, which now has a “hypoxia season”

CORVALLIS, Ore. – For the past two decades, Oregon has experienced a decline in oxygen in Pacific Ocean waters near the seafloor just off the coast to the extent that many scientists are saying we now have a “hypoxia season,” much the same way that we have a wildfire season inland.

And 2018 was one of the worst years for low-oxygenated waters, beginning in early June and lasting through Labor Day.

Many commercial crabbers reported significant die-offs in their harvests and they have reached out to the scientific community for assistance. Oregon State University recently received a four-year, $1.1 million grant from the NOAA Coastal Hypoxia Research Program to work with Oregon Department of Fish and Wildlife, crabbers and other fishermen to map and track the extent of the hypoxia, identify “hotspots” and potential refuge areas, and develop predictive models of when and where low oxygen will occur – and affect Dungeness crabs and fishes.

“Our ocean is changing and when we first measured hypoxia off Newport in 2002, we thought it might be a local phenomenon,” said Francis Chan, an Oregon State University ecologist and a principal investigator on the grant. “That is no longer the case. Low oxygen is striking a big swath of the West Coast and is returning year after year. So we’d better learn to live with it.”

As part of the grant, OSU researchers will work with the crabbing industry over the next four years to deploy approximately 40 “dissolved oxygen” sensors on crab pots from mid-spring until the crabbing season ends – usually in August, which is roughly the peak of hypoxia season.

“I am thrilled that NOAA has recognized the need to study the effects of hypoxia as it relates to commercially important fisheries and the management that goes into keeping these fisheries productive and sustainable,” said Al Pazar, an Oregon fisherman and boat owner. “As a fisherman, I have seen the results of hypoxia on fishery resources.

“This grant will engage research scientists with the fishing industry in a collaborative effort to gather new data and fill existing data gaps critically needed to make good management decisions. Oregon State University continues its rich tradition of ocean research and industry collaboration to collect real-time information to use in real-life fishery management.”

One problem for scientists in reacting to the emerging issue of hypoxia has been a lack of data, said Jack Barth, an OSU oceanographer who heads the university’s Marine Studies Initiative. “We’ve had maybe three or four sensors out there in specific locations gathering data, but we need more locations and longer time series to see how rapidly hypoxia develops, and where.”

“The health of our oceans reflects the health of our planet, and we must invest in research to better understand the challenges that are exacerbated by climate change,” Bonamici said. “The increasing presence of low-oxygen zones threatens fisheries, the economic future of coastal communities, and ocean and coastal ecosystems.

“Strong research partnerships like the work being done at Oregon State University will help improve our understanding of hypoxia and ocean health, giving affected communities the tools they need to adapt and mitigate the effects.”

Scientists define severe hypoxia as water that contains less than 0.5 milliliters of oxygen per liter of water. This summer, a sensor on a mooring near Heceta Bank off the central Oregon coast documented hypoxic water in early June with oxygen levels reaching zero near the seafloor shortly thereafter. This coincided with reports of crabs dying.

ODFW researchers reported one crabber this summer who had deployed 120 pots and pulled up only four live crabs. “But we also heard about a crabber who pulled up a bunch of dead crabs in one area, then did fine in another area just eight miles away,” Chan said. “That’s why we need more data that fishermen can use.”

The researchers say a changing climate is behind the emergence of hypoxia, though there are several factors contributing. First, ocean waters globally are warming and as they warm they lose some of their capacity for holding oxygen. So as that water moves closer to shore, it is less-oxygenated.

A primary factor, however, has been a shift in the wind patterns. Oregon’s rich ocean waters have long been fueled by “upwelling,” where southward winds mix the water and bring cold, nutrient-rich water from below. That fuels phytoplankton blooms, which fertilize the food web, but also can suck the oxygen out of the water when they die and sink to the bottom. An ODFW video from 2017 illustrates the problem: http://oregonmarinereserves.com/2017/09/06/hypoxia-central-coast/

“Historically, Oregon has had flip-flopping wind patterns in the summer so that after a week or two of strong upwelling, the winds abate or shift to the north,” Barth said. “That allows the system to flush out and re-oxygenates the water. Over the past several years, though, that flushing hasn’t happened as frequently and the phytoplankton overwhelms the system and essentially chokes it.”

“It wasn’t until we got that wind and rain in September that the low-oxygen water moved away from shore and let the system reset itself.”

In late August, Barth and his colleagues deployed a glider that traversed Oregon’s near-shore waters from Astoria to Coos Bay and measured the oxygen levels through the water column, and beamed the data back to OSU computers.

“You could clearly see when the system flushed out after that windy and rainy week in early September, and just as clearly see the influence of low-oxygen water up and down the entire coast,” Barth said. “One thing that surprised us was that the low oxygen wasn’t just at the seafloor, but in some places was present in a third to a half of the water column. That has implication for other fisheries besides the bottom-dwelling crab and halibut.

“But we could also see certain areas – like the Stonewall Bank rockpile off Newport – where the waters mixed and act like a refuge. That’s the kind of data we hope to attain with the help of industry.” 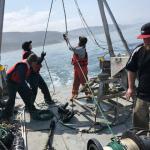 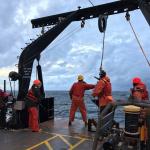