25 plants for attracting native bees to the garden

CORVALLIS, Ore. – Honeybees get all the attention, but they aren’t the only bees pollinating our gardens. In Oregon, over 500 native bees are out doing their part, too

As National Pollinator Week nears June 18 to 24, it’s time to bring them into the limelight. Many are beautiful – like the metallic sweat bee with emerald green head and thorax or the cute ball of fluff called a digger bee. They’re also docile, leaving people alone as they move from plant to plant gathering and depositing pollen.

Without insect pollinators cucumbers, apples and berries – along with thousands of other plants – wouldn’t bear fruit or vegetables. That makes conservation vital, said Gail Langellotto, entomologist and horticulturist for Oregon State University Extension Service. To help make this happen she is surveying bee species from 24 Portland-area gardens, all tended by a cadre of OSU Extension master gardeners.

For this Garden Ecology Lab research project, Langellotto visits the gardens monthly to collect bees. They are then sent to experts at the American Museum of Natural History in New York for identification. The information collected enhances the Oregon Bee Atlas, a volunteer program charged with surveying the whole state.

“We want to generate a species list from Oregon gardens,” she said. “Other states have them, but we don’t know what native bees appear in Oregon. If we know which bees we have, we can determine their health and how we might help them.”

“The Oregon Bee Project is about putting tools in people’s hands to literally build and care for native bee pollinator habitat, and gardeners are really at the forefront of that effort,” said Andony Melathopoulos, OSU Extension bee specialist and leader of OSU’s participation in the project.

On the Oregon State campus in Corvallis, Al Shay, a horticulture instructor at OSU, has led a campaign to show how to be kind to bees. He and his students build pollinator houses and plant accompanying gardens. They’ve installed them, not only on campus, but around town at the Corvallis Fire Department downtown, the Methodist Church and Sunset Park.

Shay hopes to have 20 more pollinator houses placed in public locations by next year, some accompanied by gardens.

“As we become more urbanized, it makes sense to provide habitat for pollinators,” he said. “We’re trying to get the word out and tell people to do the same things in their own backyards.”

Langellotto agrees. Part of her research is looking at volunteer gardens and noting what conditions pollinators thrive in. They use mapping and geographic information systems (GIS) to see what’s adjacent to the gardens – highways, forests, waterways, shopping centers, farms or any other land use that may be nearby.

“We expect gardens can be a fantastic habitat for bees,” she said. “Gardens can be incredible for conservation in general. If we’re able to identify garden features that help conserve bees we will communicate that and hopefully get gardeners to do some of these things.”

Plant selection is the biggie, she said. One tiny garden in her study is right up against Interstate 5 but had the second most number of bees of the 24 they surveyed. And most likely it will rank first or second in diversity.

“It suggests that intentional plant choices make a difference,” Langellotto said. “If you plant it, they will come.”

Native plants play a large role, but there are many exotics that do just as well. Look for single flowers with flat faces; fluffy double flowers deter bees. Choose a diversity of plants and have some that bloom at different times of the year – some plants like Oregon grape even bloom in winter.

Plant in swaths. Planting something is better than nothing, but you’ll notice that a single plant rarely has pollinators visiting.

“Bees are economical,” Melathopoulos said. “They want to go to a big box store. No mom-and-pop stores for them.”

One of the most important things gardeners can put into practice is limiting use of pesticides (check with your local Extension office or Master Gardeners to determine what is wrong with your plants before treating).

Native bees are solitary and live in ground nests, so leave a little bare ground for them.

“Bees are crucial to the food we eat,” Langellotto said. “They help maintain the plants we love. Something as simple as planting a sustainable garden can help with conservation.”

Check out the Oregon Bee Project’s website for information on events planned for National Pollinator Week.

Vine maple (Acer circinatum): Native, deciduous large shrub or small tree that can be trained to a single or multi-trunked form. Good as an understory plant under tall evergreens. Zone 7.

Camas (Camassia spp.): A native bulb with tall foliage and an even taller stalk of blue flowers.

Willow (Salix spp.): Many different types of this deciduous shrub or tree, depending on which you choose. Some have a graceful weeping form. Zone 6.

Borage (Borago officinalis): An annual herb with fuzzy foliage and delightful clusters of blue flowers; will reseed year to year. An ancient plant that is used for medicinal purposes.

California lilac (Ceanothus spp.): Tough evergreen shrub with knobs of blue flowers that cover the plant like a blanket. Drought tolerant. There are many cultivars. Zone 7-8.

Geranium (Geramium spp.): These perennials are not the blustery blooming annual plants that we’re all familiar with; they are tough, hardy perennials with five-petaled flowers in many shades of purple and pink. Zone 3.

Lupine (Lupinus spp.): Tall spikes of flowers make this perennial a distinctive plant in the garden. The most common is blue, but hybrids run the gamut from pink and red yellow and white and even bi-colors.  Zone 3.

Sneezeweed (Helenium autumnale): Another native, yellow-blooming perennial with daisylike flowers and a big cone in the center. Zone 3.

Showy tarweed (Madia elegans): This yellow-blooming native plant is an annual herb, and a beautiful one at that. Flowers are centered with a red ring.

Stonecrop (Sedum spp.):  There are any species of this succulent, both tall and low. Groundcovers normally put out small yellow flowers; tall have blooms in shades of pink. Drought tolerant. Various hardiness, some as low as Zone 4.

Michaelmas daisy (Aster amellus): An easy-to-grow perennial with daisylike flowers in various shades of purple and pink. There’s even a white one. Zone 4. 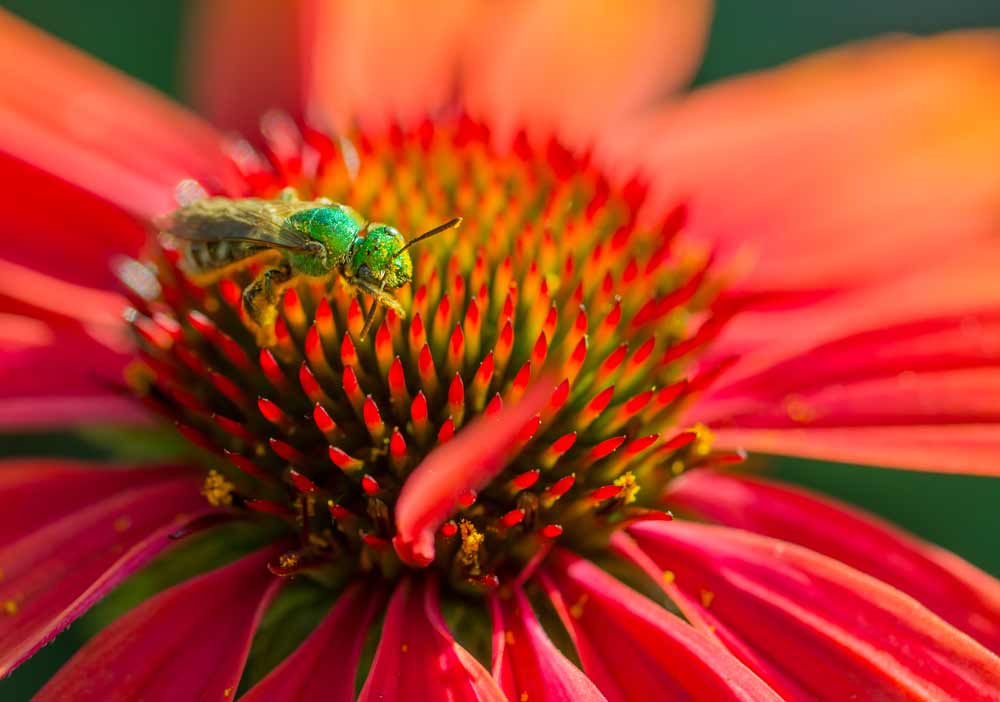