CORVALLIS, Ore. – Four decades after their capture more than a half-mile below the ocean’s surface, three snailfish species have received their scientific names, two of them from school children on Guam in the island’s native Chamorro language.

The rare specimens of liparids were collected in the early 1980s in traps set in the Mariana Archipelago in the western Pacific Ocean, deposited with NOAA’s Pacific Islands Fisheries Science Center in Hawaii and did not get examined until recently, when they were noticed during the center’s move to a new location.

“David Stein came to Hawaii to assist with the description of another snailfish species from the depths of the Mariana Trench and visited PIFSC to examine the snailfish specimens,” Mundy said. “That’s when he found that three distinct, undescribed species were among them.”

The specimens have been deposited in the Oregon State University Ichthyology Collection, curated by Brian Sidlauskas and Peter Konstantinidis in the Department of Fisheries, Wildlife, and Conservation Sciences. OSU was selected as the archive for the specimens because the Pacific Islands Fisheries Science Center does not maintain permanent biological collections.

Captured in traps as a byproduct of assessments of deepwater shrimp populations, the species are the first of the snailfish family to be described from the Mariana Islands bathyal zone – between 200 and 2,000 meters deep.

There are more than 400 species of snailfishes known from about 30 genera; they have tadpole-like bodies without scales and range from 2 inches to 30 inches in length.

Needing cool or cold water, snailfish are most abundant and diverse in temperate and polar areas; in the tropics and subtropics, suitable water temperatures occur only at bathyal depths or deeper.

“NOAA research vessels made ichthyological collections throughout the Mariana Islands in the 1980s,” Mundy said. “A surprising number of snailfishes, unexamined until recently, were captured. Both collection and preservation have been hard on these soft-bodied, fragile fishes, but the condition of some of them remained good enough that description was possible. Among those are the three in this paper.”

Students in Guam from elementary through high school age were invited to compete for the right to suggest names for the new species, and two of the student suggestions were chosen by Stein and Mundy. They named the third species, Paraliparis marianae, after the archipelago in which it was found.

Aydan Charfauros of Tamuning Elementary came up with Paraliparis echongpachot, choosing echong pachot as the species name because that term means crooked mouth in Chamorro; the mouth is a key defining characteristic of this fish.

“Names for new species have traditionally been formed from Greek or Latin words, from the names of people who collected the specimens or from the names of other scientists to honor them,” Mundy said. “This has resulted in Euro-American names for species worldwide, a practice that is regarded by some to be colonialist or imperialist. In recent years there has been a movement to form new names from the languages of indigenous people in the areas where new species are found, to reconnect taxonomy to them.”

Stein, a globally recognized authority on snailfishes who has described more than 100 liparid species, says a goal when trying to invent a name is for it to be “euphonious.”

“You want a name that sounds good, and I particularly enjoy kadadakaleguak,” he said. “I just love it.”

Stein notes that a gap of four decades between discovery and naming is not unusual.

“Several species have been named that were hundreds of years old,” he said. “That’s one of the reasons museums exist, and it’s very important and largely unappreciated.”

“New studies use old material all of the time, and not only for the identification of new species,” Sidlauskas added. “People want DNA samples, stomach contents, parasites of fishes, measurements, photographs and skeletons. We’re like a regional branch of a worldwide library of biodiversity, of scientific specimens. We send and receive specimens all the time.” 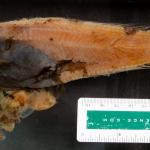 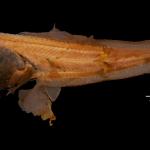 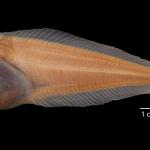