Algae from Japanese tsunami debris hasn’t taken a foothold, though many were “global invaders”

NEWPORT, Ore. – Researchers from the United States and Japan have identified 84 species of marine algae and cyanobacteria that arrived on the Pacific Northwest coast via debris from the 2011 Tohoku  earthquake and tsunami and, to date, none have gained a foothold in U.S. coastal waters.

Since more than a dozen of the algal species are on a global list of dangerous invasive organisms, Oregon and Washington may have dodged the proverbial bullet, experts say. It will take several more years to be certain that none of the species that were aboard the debris have become established, but the outlook appears to be good.

Results of the algal research have been published in the journal Phycologia.

Lead author Gayle Hansen, an Oregon State University algal taxonomist, said that more than 80 percent of the algae were fertile when they arrived. However, quick action by the Oregon Department of Fish and Wildlife appears to have prevented most of the species from colonizing the shore.

“When the large concrete dock laden with marine algae and invertebrates washed ashore near Newport, Oregon, some 15 months after the tsunami, I was in the parking lot at ODFW folks discussing the fouling Japanese biota with some of the staff,” Hansen said. “They decided it was imperative to remove not only the dock, but also all future tsunami debris that washed ashore on Oregon beaches as soon as possible after landing in order to reduce any possible species invasion.

“That turned out to be an extremely wise decision. When the debris materials were removed from the beaches, so was the risk of most of the algal-fouling species colonizing our shore. Although a large number of the algae were in a reproductive state, their spores typically don’t live for very long, or disperse very far, so getting them off the beaches quickly was a smart move.”

The 9.0 magnitude earthquake generated tsunami waves that were more than 30 feet high in the open ocean, and eventually reached more than 125 feet in some areas as the water surged inland. The tsunami carried as far as six miles inland and the Japanese Ministry of the Environment estimated that 4-5 million tons of debris from the disaster washed out to sea – and about 30 percent was buoyant enough to float.

Numerous species of algae and bacteria were attached to debris items that drifted across the north Pacific Ocean and landed in Oregon and Washington. Hansen and her Japanese colleagues, Takeaki Hanyuda and Hiroshi Kawai of Kobe University, identified, described and began analyzing the distribution of these species between 2012 and 2016. About 61 percent of the species were thought to already be in the northeast Pacific before the tsunami, but a number of these turned out to vary genetically. In fact, the haplotype variation in eight of the shared species was sufficiently different to consider them to be a new genetic invasion risk.

The study, which was funded by the Japanese Ministry of the Environment, also enabled the researchers to identify a number of new organisms, which previously had not been described in the literature.

Thirteen of the species were on a global watch list for invasive species and three were considered particularly hazardous – Undaria pinnatifida, Codium fragile subspecies fragile, and Grateloupia turuturu.

Undaria pinnatifida, a brown alga up to 3-4 feet in length on the debris, was the largest of the species. “It is considered highly invasive, partly because it can reproduce up to three times a year,” Hansen said. “A form of this species was introduced into California in 2000 and they’ve had trouble eradicating it. Normally found on docks and in the shallow subtidal waters, it can edge out native plants like Nereocystis, the bull kelp, a keystone species in the nearshore regions of Oregon and Washington.”

Codium fragile subspecies fragile was found abundantly coating the surface of a derelict Japanese boat near Road’s End, north of Lincoln City, Oregon. “It appeared as a greenish-black to brown turf that only  occasionally produced the upright, branched finger-like fronds typical of this species,” Hansen noted. “It is quite invasive and reproduces asexually, which means it can reproduce very easily, at any time. That one was a big scare.”

A third dangerous species to arrive on tsunami debris was Grateloupia turuturu, a species that has been a major problem on the East Coast, especially in New England bays, where it crowds out native seaweeds. It is also listed among the 100 worst invaders in the Mediterranean Sea. The turuturu form found on debris in the Northwest was genetically slightly different than the New England form, so it may not be as highly invasive, Hansen said.

The concrete dock at Agate Beach, which was the largest debris item, had 31 different algal species – the most found on any debris item during the study. However, other items also carried numerous algal species. A boat at Horsfall Beach in southern Oregon bore 25 different species, the Road’s End boat near Lincoln City had 24 and a boat near Seal Rock, Oregon, had 20. Algae species were also found on pipes, tanks, pallets, baskets, beams, a tire and even a plastic carboy.

“The State of Oregon was able to remove about 90 percent of the derelict and damaged vessels from Japan that arrived along Oregon beaches – and most of the vessels were immediately removed from the surf zone over a period of 24 hours or less,” said Steven Rumrill of the Oregon Department of Fish and Wildlife.

Volunteer groups including SOLVE and Surfriders then quickly removed most of the smaller debris items and their biota. “The cleanup efforts were so efficient that it was often difficult to get material to study for our assessment of the invasion threat,” Hansen said.

Washington had a similar response and success rate, according to Allen Pleus of the Washington Department of Fish and Wildlife.

Hansen is in the Department of Botany and Plant Pathology within OSU’s College of Agricultural Sciences. 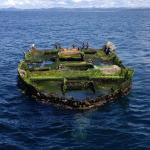 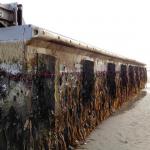