Those interested in attending Pettit’s presentation, titled “Science of Opportunity,” should register online.

A veteran of three space flights, Pettit served as NASA science officer for Expedition 6 in 2003, operated the robotic arm for STS-126 in 2008 and served as a flight engineer for Expedition 30/31 in 2012, living aboard the International Space Station for more than six months.

In all, the Silverton, Oregon, native has spent more than a year living and working in space. Prior to becoming an astronaut, Pettit was a staff scientist at Los Alamos National Laboratory for 12 years.

Among his many accomplishments in the space program is inventing the zero-gravity coffee cup.

Pettit’s return to Corvallis is part of the School of Chemical, Biological and Environmental Engineering’s Octave Levenspiel Distinguished Lecture Series. Levenspiel, who was a chemical engineering professor at OSU and also an alumnus of the university, is one of four people from the college to be elected as a member of the National Academy of Engineering. 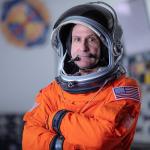