Barring wildlife helps get your space back

CORVALLIS, Ore. – When it comes to sharing space, humans and wildlife don’t see eye to eye.

“Our homes and gardens often overlap with spaces and resources used by wild animals, both native and non-native,” said Dana Sanchez, Oregon State University Extension Service wildlife specialist. “A ‘shared habitat’ situation can pose some challenges when the animals’ day-to-day activities come in conflict with ours.”

The strength of the conflict depends on the type of wildlife, where the interaction occurs, and the severity of animals’ actions on resources valued by humans, she said. For most people, it’s easier to put up with an irritating European starling than a ravenous deer. In fact, deer are an enduring problem with homeowners, as are rats (though not technically wildlife), and ground-dwelling animals like moles, voles and gophers.  Increasingly, wild turkeys pose a problem by destroying plant roots, digging up lawns and even pecking out car windows.

A new Extension publication Managing Wildlife Conflicts in Your Home and Garden by Sanchez offers basic strategies for dealing with wildlife. She emphasizes that it’s a matter of managing wildlife rather than eliminating them. Once they’ve discovered food, water or shelter, animals stick around. If you succeed in getting rid of one or two, others will come to take their place.

“Animals like deer are habituated to us so are able to ignore our smells, noises and activity,” she said. “Gardens supply their dinner. They’re not likely to leave on their own.”

The first consideration in managing or preventing wildlife is assessing whether the problem is severe enough to spend the time, energy and money needed to deal with them. Or is it an annoyance you can live with?

“Try to consider the ecology of the animal,” Sanchez said. “What benefits – soil aeration and nutrient mixing, insect control, etc.  – do they provide versus damage and how can that be managed?”

Once you’ve identified the wildlife, you can learn more about the foods the animal eats, what season it nests or dens, and other information to help you understand what it is trying to get from your home or garden. The more you know, the easier it is to figure out what to do.

Sometimes, the problem can be solved by replanting with native plants that have evolved to tolerate a certain amount of grazing. Some produce chemicals in their leaves that taste bitter. Some put out thorns or prickles.

There are three basic tactics to manage wildlife/human conflicts:

Block access: “By keeping animals away from whatever it might damage, you prevent the problem,” Sanchez said. For instance, the only way to stop deer from coming into your yard is a deer fence, which can be expensive. As an alternative, you can exclude them from certain areas like vegetable gardens with less deer fence. Be sure to use fencing that’s strong and tall enough to keep them out. A couple of poles with lightweight bird netting isn’t going to do the trick. To keep squirrels out of the attic, close any openings they could use to enter. Use welded wire (hardware cloth) underneath raised beds to keep moles and gophers from disturbing your vegetable bed. Block holes in the fence to hold back critters like skunks and other animals that welcome an easy way in. Some wildlife is more difficult to hold off than others. For example, you’ll only be able to hold out burrowing nutria with an 18-inch barrier under the fence.

Deter: Most animals are prey for other animals, so you may be able to prevent them from entering by associating fear or risk with a desirable resource. This could range from flashing tape, motion-activated sprinklers or mechanical predator calls. You can also add unpleasant tastes or smells to the plants they eat. The repellents must be applied often and can be expensive. Most have not been scientifically tested for effectiveness and those that have vary widely, Sanchez noted. Since animals can get used to many deterrents, it’s a good idea to mix them up.

Remove animals: Lethal removal of animals from inside buildings or to reduce their population is sometimes necessary. Moving an animal somewhere else is not an option due to low survival, high risk of spreading disease, and because it’s against the law. Besides, if food and shelter are still available, other animals will show up to take their place. Hiring a professional wildlife control operator is recommended for situations where animals need to be live-trapped, then euthanized, or in cases where special equipment or registered toxicants are needed. Traps are dangerous to you, your family, pets and non-target wildlife. Same thing with toxic baits. They don’t discriminate, so use with extreme caution and fully comply with the directions on the label.

Finally, if you think an animal might pose a health risk, contact your state, city or county health departments or call an Extension professional for help. 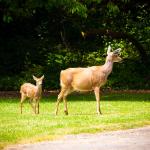