CORVALLIS, Ore. — New research shows that mice and voles scurry to bear scats to forage for seeds, finding nutritional value in the seeds and in some cases further dispersing them.

The study is published in the journal Ecosphere by researchers at Oregon State University and the Alaska Department of Fish and Game. The research builds on an OSU study that determined that bears are the primary seed dispersers of berry-producing shrubs in Alaska.

In southeastern Alaska, brown and black bears are plentiful because of salmon. Bears frequently supplement their salmon-based diet with fruit as they build their fat stores for winter hibernation. As a result, their seed-filled scats are found throughout the landscape.

“Salmon can have a far greater impact on the ecosystem than we thought,” said study lead author Yasaman Shakeri, an Oregon State University graduate now with the Alaska Department of Fish and Game. “Our study shows how small mammals can benefit indirectly from salmon through high bear densities that salmon support and the resulting seed-filled scats on the landscape. Not only are small mammals spending months feeding and fighting for the seeds in scats, they’re also scattering the seeds on the landscape, which allows some of the seeds to become future fruiting plants.”

The researchers placed motion-triggered cameras near bear scats in the upper Chilkat Valley, 30 miles north of Haines, from June to October in 2014 and 2015. They recorded visits to the scat made by small mammals and birds.

Northwestern deer mice made 4,295 total visits to the scats – an average of 8.5 a day. Northern red-backed voles visited 1,099 times at an average of 2.2 times a day. In addition to the cameras, the researchers also live-trapped and tagged small mammals to estimate their abundance and population densities.

The team collected bear scats on roads and trails within the study area from July-September in 2014 and 2015 and analyzed the nutritional characteristics found in the 12 species of fruit found in the scats, including gross energy, total dietary fiber, crude protein and crude fat. From those samples, they estimated digestible energy per seed.

The energy within the seeds in bear scats can be a significant portion of the energy budget of rodents. For example, a single bear scat contained 73,230 devil’s club seeds, which was capable of meeting the daily energy requirements of 91 deer mice. In coastal Alaska riparian areas, bears are potentially capable of indirectly subsidizing the energy needs of 45–65 percent of local deer mouse populations, Shakeri said.

In addition to consuming the seeds at the site, the mice appear to scatter-hoard the seeds in much the same way that gray squirrels scatter-hoard acorns, said Taal Levi, an ecologist in OSU’s College of Agricultural Sciences and co-author on the study. Scatter-hoarding is creating a large number of small hoards, as opposed to a large hoard found in a single place.

“This process is called secondary seed dispersal and forgotten seeds can have much higher survival than unburied seeds,” Levi said.

The study was also co-authored by Kevin White, a wildlife biologist with the Alaska Department of Fish and Game. The M.J. Murdock Charitable Trust and OSU’s Department of Fisheries and Wildlife provided funding for the study.

Shakeri has posted videos on YouTube of deer mice and a vole foraging for berries in bear scat. 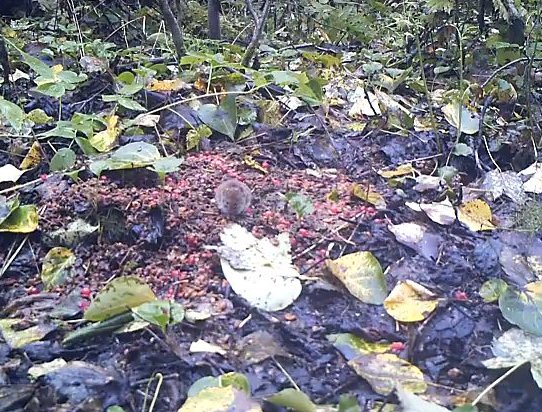