CORVALLIS, Ore. – An Oregon State University chemistry researcher who made history a decade ago with the accidental discovery of the first new blue inorganic pigment in more than two centuries is again pushing forward the science of color.

Analyzing the crystal structure of pigments based on hibonite, a mineral found in meteorites, Mas Subramanian of the OSU College of Science has paved the way toward designing more pigments that are stable, durable and non-toxic with vivid hues.

Findings from the study, supported by the National Science Foundation, were published in the American Chemical Society journal, ACS OMEGA.

Subramanian and his team discovered YInMn blue in 2009 when they were experimenting with new materials that could be used in electronics applications.

“We got lucky the first time with YInMn blue, and now we have come up with some design principles,” Subramanian said.

Through much of recorded human history, people around the world have sought inorganic compounds that could be used to paint things blue, often with limited success. Most had environmental or durability issues.

“Most pigments are discovered by chance,” Subramanian said. “The reason is because the origin of the color of a material depends not only on the chemical composition, but also on the intricate arrangement of atoms in the crystal structure. So someone has to make the material first, then study its crystal structure thoroughly to explain the color.”

Before YInMn blue, the last blue discovery was cobalt aluminum oxide-based blue, synthesized by a French chemist in 1802. Cobalt blue remains a dominant commercial pigment because of its intensity of color, ease of synthesis and wide applicability.

Its production, however, requires a significant amount of a cobalt ion, Co2+, that’s hazardous to both humans and the environment.

By analyzing the structure of hibonite-based blue pigments, Subramanian has developed a way to match or surpass cobalt blue’s vividness while using much less of the harmful carcinogenic cobalt ion, or replacing it entirely.

The hibonite-based pigments are more thermally stable than cobalt blue due to their higher preparation temperature and remain unaltered structurally and optically upon exposure to strong acid and alkali.

The researchers report that an oxide containing calcium, aluminum, titanium along with cobalt or nickel can crystallize into a structure similar to hibonite that allows for a series of blue colors.

Compared to traditional cobalt blue, the new blue can be “tuned” by adjusting how much cobalt (Co2+), nickel (Ni2+) and titanium (Ti4+) are placed into the hibonite structure’s three possible “chromophore” environments; those are the parts of a molecule that determine color by reflecting some wavelengths of light while absorbing others.

This study shows the presence of chromophores in a “trigonal bipyramidal-shaped crystal environment” – essentially consisting of two triangular-base pyramids joined base-to-base – is critical for color enhancement.

“This part of the crystal structure of hibonite, like YInMn blue, allows for vivid blue colors with a reddish hue,” Subramanian said. “The hibonite blue exhibits better energy-saving, heat-reflecting properties than traditional cobalt blue due to the presence of titanium and less cobalt content.

“In nature, hibonite is only found in meteorites that have been subjected to thousands of degrees of temperature when they go through the Earth’s atmosphere, so it makes sense that the structure is remarkably stable,” he added. “These kinds of mineral structures are probably the future for designing durable and safe inorganic pigments.”

“Research is like when you go on a journey to see something, and maybe when you get there it wasn’t as interesting you thought it would be, but what you saw along the way was more interesting than you could have imagined.” 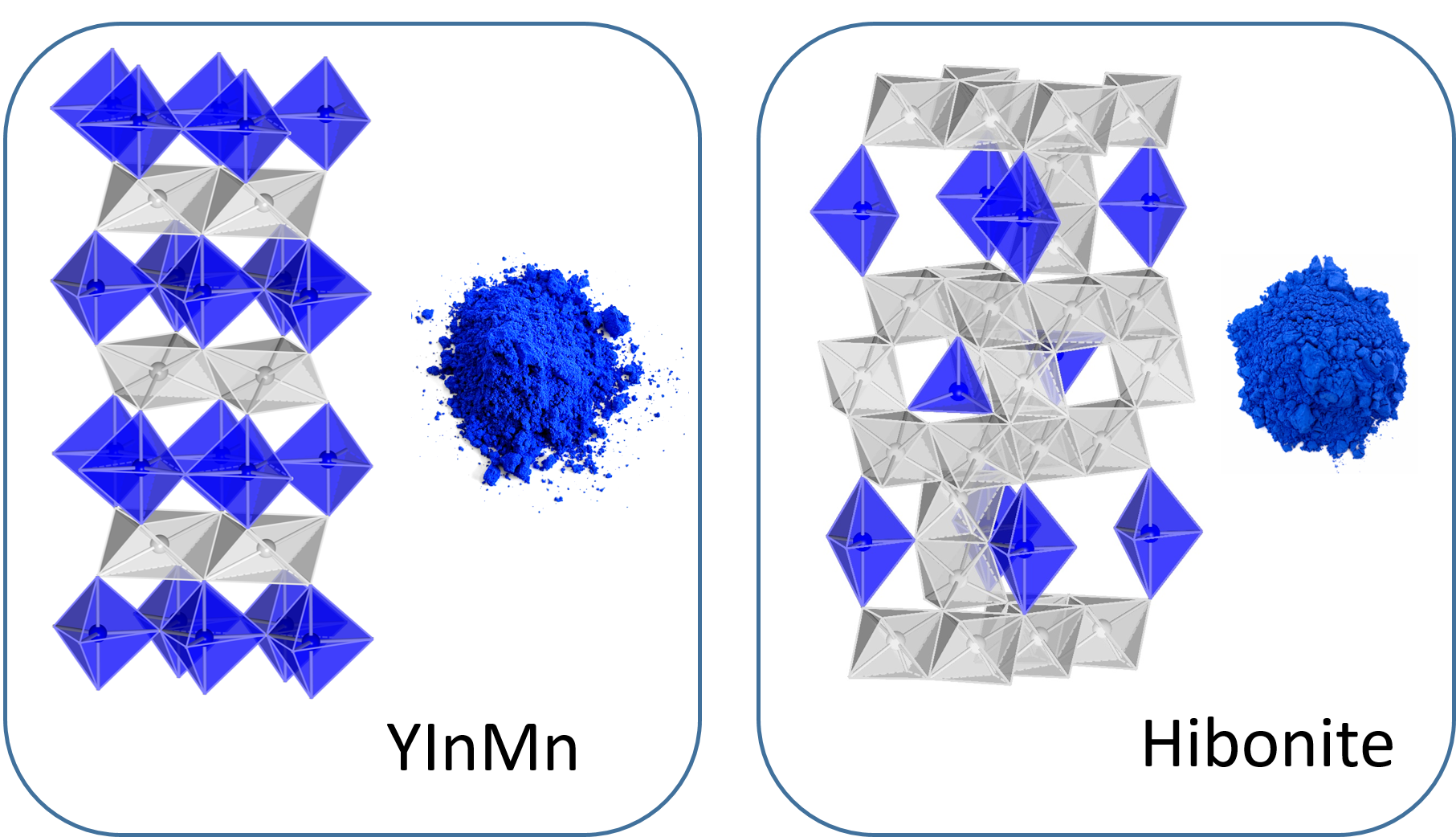