Carnivore interactions are a game of risk and reward, Oregon State research shows

CORVALLIS, Ore. – Coyotes can eat by scavenging cougars’ prey but it’s a risky proposition as coyotes often end up killed by cougars too, a new study of predator interactions by Oregon State University shows.

Researchers in the OSU College of Agricultural Sciences also looked at black bears and bobcats and found the interplay within the four-species “guild” of predators defied simplistic description.

Findings, published today in the Proceedings of the National Academy of Sciences, challenge the traditional model for carnivore interactions among species: that dominant predators suppress the other ones.

The study, one of the first to quantify rates of both scavenging and intraguild predation, is important because understanding the influence of dominant predators is necessary for anticipating the ecological effects of changes in carnivore populations.

Factoring in the study area’s cougar and coyote density, the findings suggest nearly one-quarter of the area’s coyote population is killed by cougars each year, although in many cases, coyotes did not appear to be killed while scavenging.

“That kill percentage estimate implies a strong suppressive effect counteracting the benefit to coyotes provided by the cougars,” said Oregon State Ph.D. student Joel Ruprecht. “Overall, the issue of whether subordinate species incur a net fitness cost or benefit from dominant predators is far from resolved.”

Coyotes seem to readily accept the risk of being near a cougar if a food reward is available, possibly because they can manage the risk by being extra vigilant, he added. Also, if a dominant predator becomes satiated after feeding on a kill, it may not be motivated to kill other carnivores.

“Learning whether dominant carnivores kill subordinate carnivores for food or for the long-term benefit of removing a competitor needs to be the focus of further research,” said OSU associate professor Taal Levi.

Ruprecht, Levi and Ph.D. student Charlotte Eriksson led the study, which also involved scientists from the Oregon Department of Fish and Wildlife, the U.S. Forest Service and the University of California, Santa Cruz.

Between 2016 and 2020 in the Blue Mountains of northeastern Oregon, researchers tagged a “guild” of predators – 17 cougars, 17 coyotes, 11 black bears and six bobcats – with GPS collars that recorded their location every few hours. Scientists also tested the animals’ scat to see what they were eating.

“How often elk turns up in the scats of the subordinate predators is a proxy for how much scavenging they’re doing because it’s unlikely any of them are killing adult elk,” Levi said. “That means if they’re eating elk it’s probably either via scavenging or preying on calves, but in the Blue Mountains coyotes and bobcats rarely kill elk calves; black bears are somewhat more likely to.”

To further zero in on what the predators were eating, the scientists did ground searches based on clusters of cougar GPS locations – indicating potential kills – and set up cameras at 28 of the 128 confirmed kill sites. The cameras allowed for a daily tally of site visits by bears, bobcats and coyotes and thus enabled an estimate of scavenging rates.

“The traditional paradigm for species interactions among carnivores has stressed hierarchies: Dominant predators curb the efforts of the next level, the mesopredators,” Levi said. “We found evidence of that but also evidence of facilitation. The coyotes we studied had a strong attraction to kill sites, frequent carrion in their diet and high scavenging rates, compared to two indicators of suppression: They avoided cougars and also were preyed on by them.”

There was no evidence to suggest coyotes’ attraction to kill sites was lessened if a cougar was around, he added, indicating coyotes’ willingness to disregard cougar risk if a food reward was present.

Bears had moderate scavenging rates and ate moderate levels of carrion but showed a statistically significant aversion to being around cougars. Nothing suggested bears were particularly attracted to kill sites or suffered predation at the hands of cougars, or that cougars had any effect at all on bobcats.

“Bobcats were indifferent to both cougars and their kill sites,” Ruprecht said. “And bobcats weren’t avoiding coyotes in general, meaning coyote presence was probably not a primary reason bobcats didn’t feed on cougar kills.”

There were coyotes on the scene at 89% of carcasses, bears at 50% of carcasses outside the hibernation period and bobcats at none of them.

The bobcat findings were particularly surprising, he noted, because bobcats are known to scavenge from and be eaten by cougars in other locations, and also because it’s usually more likely for a wild cat like a cougar to kill another species of cat than a predator from outside their taxonomic family.

“By foregoing the energy benefits they could gain from eating on cougar kills, and in doing so reducing mortality risk, bobcats in our study area approached the risk-reward tradeoff quite differently than the coyotes,” he said. “But scavenging is only optimal under a specific set of conditions that also includes the probability of finding other food sources, and the energy required to search for them. The coyotes we studied faced little risk except from cougars and scavenged profusely; they’re probably less likely to scavenge when there are lots of competitors for each carcass.” 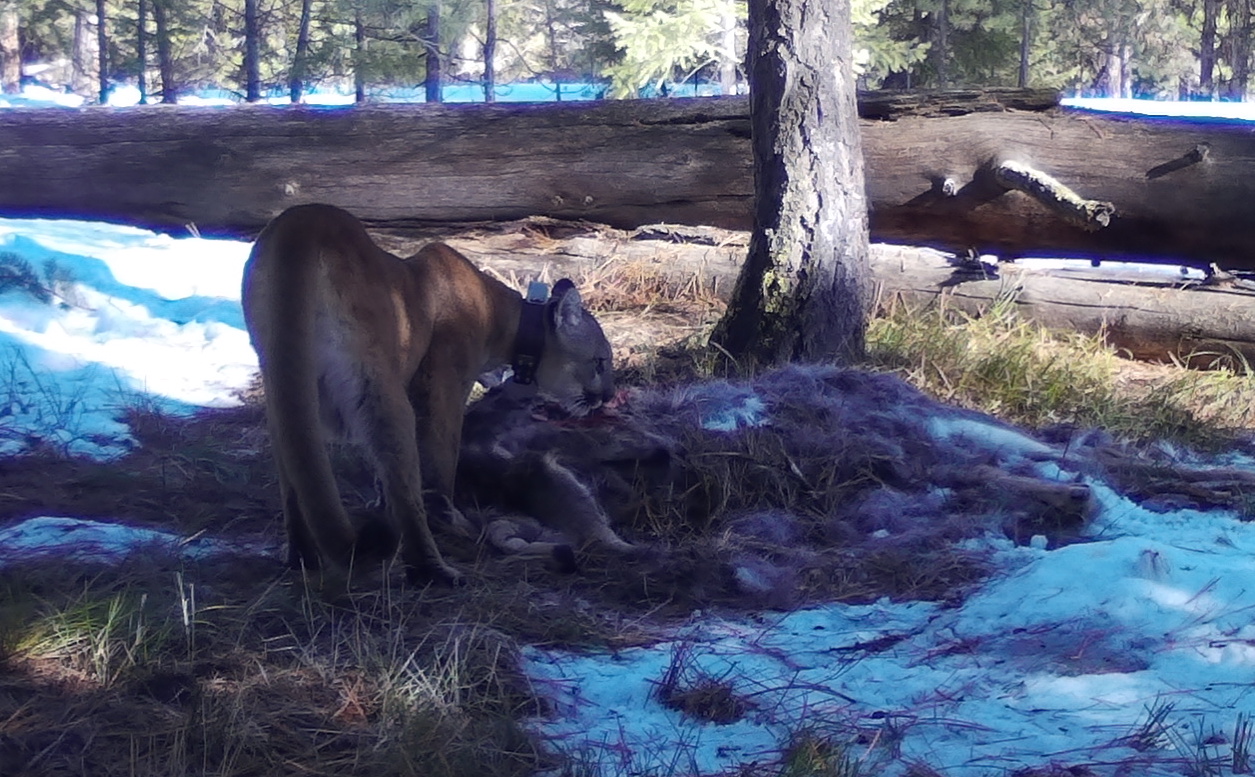 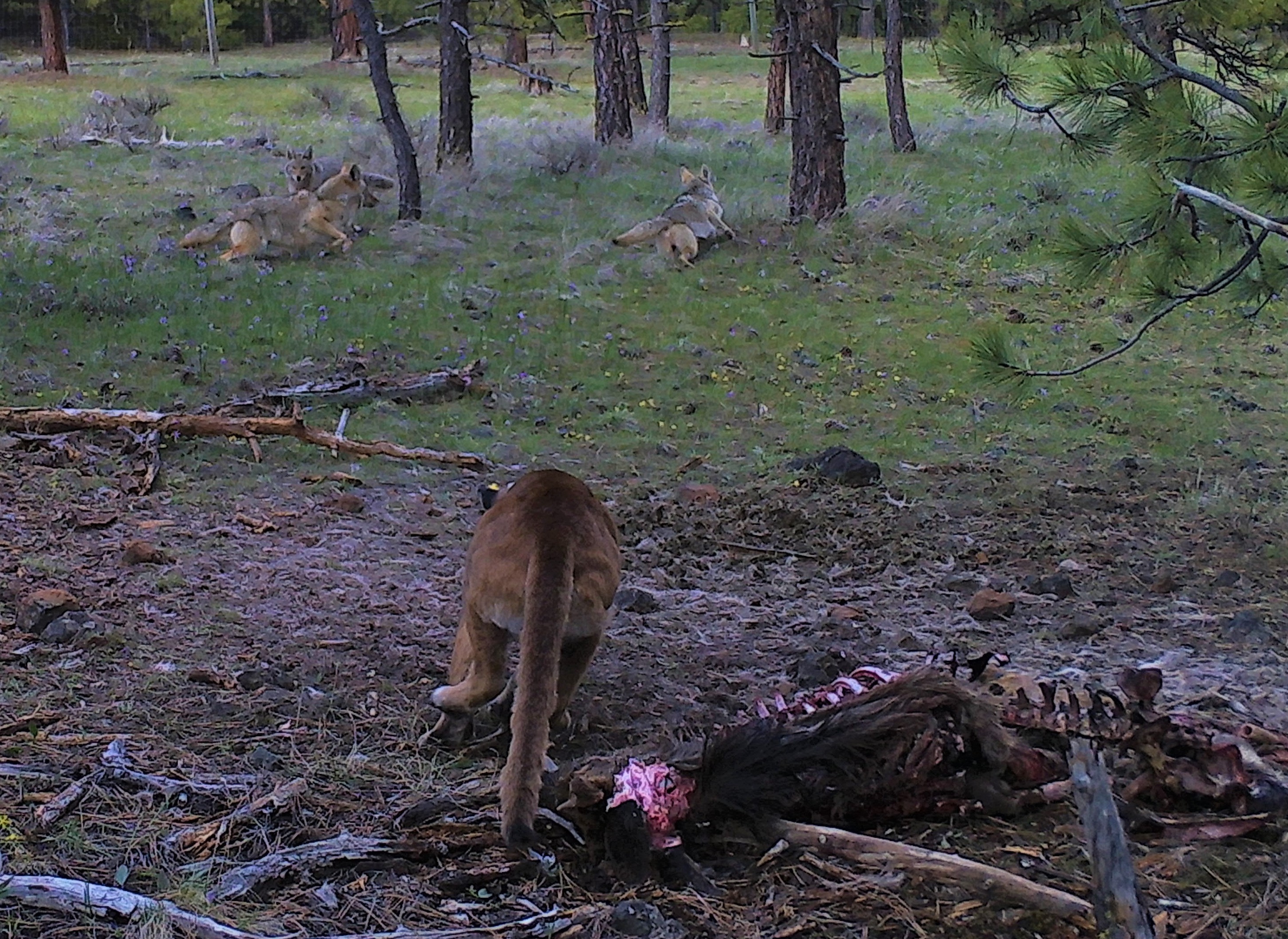