CORVALLIS, Ore. – This year’s Christmas tree shopping season is beginning to look a lot like 2018, with a tight supply and similar prices, according to Oregon State University Extension’s Christmas tree specialist.

Chal Landgren, a professor in OSU’s College of Forestry at the North Willamette Research and Extension Center in Aurora, said the supply can be attributed to two main factors. There are about 400 fewer Oregon growers than in the mid-2000s, and some land that was grown for trees is now being used for crops that are less labor intensive.

U.S. consumers reported they paid an average price of $78 for a tree in 2018, up $3 from 2017, according to the National Christmas Tree Association.

In the mid-2000s, there were more than 750 Oregon licensed Christmas tree growers producing 8 million trees. An oversupply caused wholesale prices to crash. When the Great Recession hit in 2009, many growers were forced out of the business.

“We’re coming off a period where too many trees were planted and a lot of growers have gone out of business because of the boom-and-bust cycle,” Landgren said. “We’re in a period right now where there are fewer trees available for the typical demand.”

Most of Oregon’s Christmas trees are grown in and around the Willamette Valley, especially in the foothills of the Coast and Cascade mountain ranges.

“We have good rainfall, deep soils and fairly mild winters relative to other states,” Landgren said.

Landgren is the author of the OSU Extension publication “Developing Quality Christmas Trees in the Pacific Northwest.” 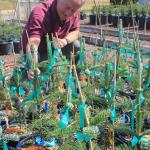