CORVALLIS, Ore. – The more people a city has and the more organized its residents’ movement patterns, the longer its flu season is apt to last, new research at Oregon State University shows.

The findings, published today in Science, are an important step toward predicting outbreak trends for a viral infection that each year in the United States sickens millions of people, sends hundreds of thousands to the hospital and kills tens of thousands.

Corresponding author Benjamin Dalziel, a population biologist in the OSU College of Science, worked with an international collaboration to analyze weekly flu incidence data from 603 cities of varying size and “structure” – that is, patterns people follow in where they live and work.

The other factor the researchers looked at was the role a key weather metric – specific humidity – played in flu epidemics.

Flu is transmitted by virus-bearing moisture droplets that people exhale, cough out or sneeze out, creating a “cloud of risk” that emanates from an infected person and is breathed in by those around him or her.

“As specific humidity decreases, the virus remains viable in the air for longer, effectively expanding that cloud,” Dalziel said. “However, if an infected person is right beside you, it matters less what the specific humidity is.”

Which is where city size and structure come in – if there are lots of people, and transportation patterns frequently draw them together, it helps flu viruses find new hosts even when climatic conditions aren’t at their most favorable for transmission.

“One thing that distinguishes urban centers from small towns is the presence of localized pockets of high population density that are connected by organized movement patterns,” Dalziel said. “We found that makes a difference for how influenza spreads at different times of year.”

The researchers found that in metropolises, flu cases are more spread out through the winter months, including early and late in the season, when the weather is not optimal for transmission. By contrast, in smaller cities, more cases will be tightly grouped in a short period of time, during peak season, when climate conditions are best for transmission.

Flu is an immunizing infection – once people have been infected by a certain strain, they’re unlikely to become infected again, at least not right away, because their immune system recognizes it and typically can deal with it efficiently.

“From the flu’s perspective, it’s facing a limited resource each season – the fraction of the population susceptible to a given strain declines as it spreads,” Dalziel said.

“Forecasting and controlling influenza is important for public health,” Dalziel said. “And there is another reason to study the flu: It’s a classic example of a complex system on Earth. To predict flu outbreaks, you need to look at a range of processes from urbanization to climate. What’s more, flu spreads and evolves in a range of animal species, and in these senses it is deeply integrated with the biosphere.”

While Dalziel is excited about the findings he does stress a few caveats.

“Our research does not show that some cities are safer than others for flu – rather it shows relative differences in when the cases are likely to occur,” he said. “Also, our model is not designed to predict what will happen with flu epidemics under climate change. There’s still a lot of uncertainty about what will happen to specific humidity as a result of global climate change. And finally, while flu vaccination is an important topic, our analysis was focused on other potentially important factors – city size and structure. What our paper shows is that city size and structure can play a role in determining how climate, and other factors such as vaccination coverage, affect influenza epidemics.”

Researchers from the University of Cambridge, Princeton University, Pennsylvania State University and the Fogarty International Center, National Institutes of Health collaborated on this study.

The Bill & Melinda Gates Foundation, the Department of Homeland Security and the Fogarty International Center, National Institutes of Health supported the research. 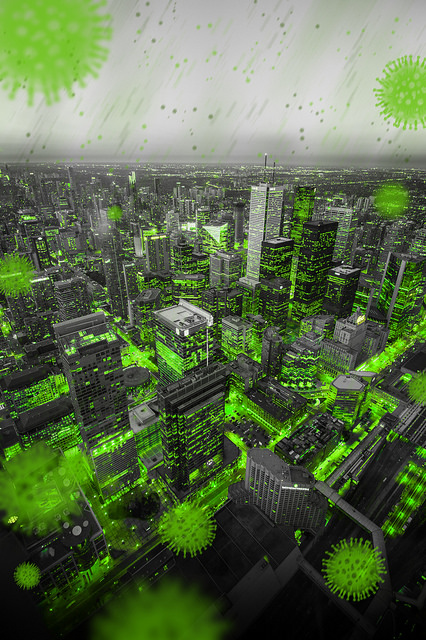