CORVALLIS, Ore. – The epidemic of Swiss needle cast on the wet and foggy west slope of the Oregon Coast Range has intensified as recent climate trends make the environment friendlier to the fungal disease that hits Douglas-fir, the most important timber species in the Pacific Northwest.

As researchers at Oregon State University studied the effects of warmer and drier conditions on forests in the Pacific Northwest, they noticed an anomaly. In addition to finding warmer and drier conditions in mid- to late-summer, they found the opposite trajectory toward cooler and wetter trends in the spring and early summer months from 2003-2012.

“We were surprised,” said David Mildrexler, who completed his Ph.D. at OSU’s College of Forestry. “Although our focus was on forest vulnerability to warmer and drier conditions, trends for spring and early summer months were generally the opposite, toward cooler and wetter conditions. Once we made the connection that these conditions keep foliage moist, which is one of the factors that SNC likes, we decided to take a closer look.”

For his dissertation, Mildrexler, now systems ecologist at Eastern Oregon Legacy Lands, looked into the effects of short-term climate trends on Swiss needle cast in the Coast Range Douglas-fir forests. Not only did he find that short-term climate trends can change SNC occurrence, the symptoms intensified in Douglas-fir found on private industrial forest land versus public land.

Mildrexler used data from a satellite that measures the surface temperatures of the forest canopy to evaluate SNC symptom distribution. Different from air temperatures, satellite-based temperatures are closely linked with water and energy fluxes in the canopy and may provide valuable information on thermal properties of the canopy important to SNC development.

The climate trends, measured from 2003 to 2012, correspond with a period of rapid uptick in SNC symptom intensification. The trends were compared with distribution of symptoms measured in aerial surveys that are conducted yearly by Oregon Department of Forestry to monitor the disease progression. During the decade Mildrexler studied, SNC grew from 267,852 acres to 519,375. And most of that was on private land, where there is a higher percentage of more susceptible younger forests.

“You can clearly see the association between symptom distribution and private industrial forest lands on the maps,” he said. “Compare it to public land and symptomatic forests are much more prevalent on private land. You look at it and say, ‘Oh, there’s something going on.’ That got us thinking about whether climate change could affect disease differently in young plantation forests.”

Although native to western North America, SNC was first identified in Switzerland and Germany, where trees had been imported from the Pacific Northwest in the early 1900s. But it wasn’t until the 1970s and ‘80s that SNC expressed symptoms in Christmas tree plantations in Oregon. In 1996, OSU researchers started annual aerial surveys that Mildrexler used in his research.

An endemic ascomycete fungus (Nothophaeocryptopus gaeumanni) causes Swiss needle cast, which is specific to Douglas-fir. The fungi live inside the tree’s needles, said Dave Shaw, a professor in the College of Forestry and co-author of the paper. When it reproduces, the fruiting bodies emerge from tiny openings in the needles called stomata, and plug them. That keeps the tree from taking up carbon dioxide needed for photosynthesis. Spores move through the trees splashed by rain and carried by mist.

Foliar fungi like the one that causes SNC are likely more susceptible to climate change than other diseases because their survival is strongly tied to changes in temperature and precipitation. Seasonal changes, such as warmer winters and precipitation from May to August, have the potential to shift conditions in favor of the pathogen and cause an epidemic.  However, unlike the monocultures of Douglas-fir on private plantations, forests on public lands have many species of trees of varying ages.  Older trees do not appear to be as impacted by the disease, which is why Swiss needle cast is considered a young plantation issue.

Trees rarely die of the disease, but their growth is reduced and infected needles turn yellow and drop early. For timber, it’s not optimal.

In previous research on the northeastern portion of the Oregon Coast Range, volume growth was reduced 23 percent to 50 percent. These are plantations that are very important for timber production in Oregon.

“Many of our industrial partners have moved to alternatives to Douglas-fir,” Shaw said. “They are planting western hemlock in pure or mixed species plantations, and some have longer rotations. You can’t strictly rely on one tree species, but Douglas-fir is bringing in top dollar; everyone is super happy. But if climate gets wetter during the early growing season months, we’ll be forced into moving into alternate species – western hemlock, western red cedar, red alder. We’re hoping this serves as the canary in the coal mine of what can happen.”

Mildrexler, Shaw and Cohen’s paper was recently published in Forest Ecology and Management.

In an interesting turn of events, the recent drought starting in 2015 appears to be decreasing the disease. The 2018 aerial survey noted 413,081 acres with visible symptoms, down from the peak in 2015 of 589,851 acres detected.  Fluctuating short-term climate patterns clearly can have a significant effect on tree-pathogen interactions. 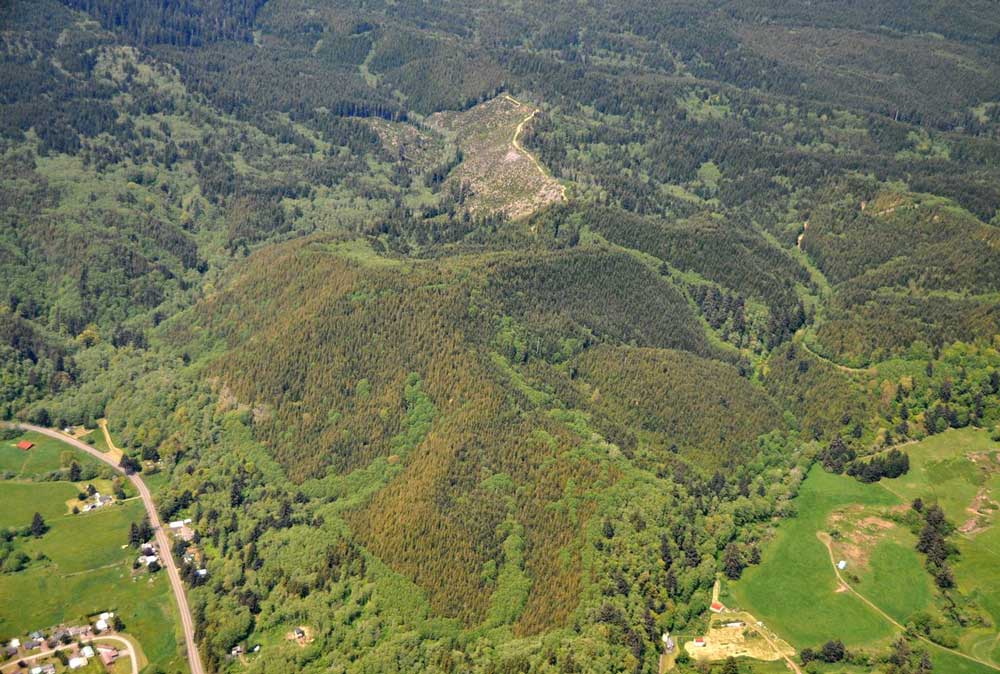