CORVALLIS, Ore. – People who identify as politically conservative are more likely to support climate change mitigation policies if they have report experiencing personal harm from an extreme weather event such as a wildfire, flood or tornado, a new study indicates.

“This study shows how personal harm from extreme weather events may be shifting the beliefs of conservatives,” said Hilary Boudet, an associate professor of public policy in the School of Public Policy in OSU’s College of Liberal Arts and one of the study’s authors. “There’s been a lot of speculation that extreme weather could have this impact. Now we have evidence that personal harm may be moving the needle on a person’s beliefs, particularly those with more conservative political orientations.”

The findings were just published in the journal Global Environmental Change. The lead author is Chad Zanocco, who worked on the project at a doctoral student in public policy at Oregon State and now is a post-doctoral scholar at Stanford University. Coauthors are Roberta Nilson of Cornell University, a former graduate student in public policy at OSU, and June Flora of Stanford. The research was funded in part by a grant from the National Science Foundation.

Extreme weather events such as fires, floods, tornados, hurricanes and landslides result in some of the most personal impacts of climate change. They are occurring more frequently and with more severity as the climate around the world changes.

Researchers are still working to understand how a person’s individual experience with an extreme weather event shapes their attitudes toward climate change policies. That was a goal of this study, which is part of a larger project examining community reactions to extreme weather in the U.S., Boudet said.

For the study, the researchers surveyed about 1,600 residents of 10 communities across the United States that had experienced extreme weather events with at least four fatalities between 2012 and 2015. They also completed case studies of the disasters and analyzed media coverage in those communities to better understand what kinds of conversations, actions and policies around climate change were occurring in those communities.

The survey included questions about personal harm from the weather event, political ideology, and a suite of questions about climate change-related policy, such as support for renewable energy projects or tax rebates for energy reduction programs. The researchers wanted to understand the link between weather and policy preferences around climate change, rather than just climate change concern or beliefs alone, Boudet said.

“It is also important to note that we considered a range of extreme weather events in this study, such as floods, hurricanes, tornadoes, wildfires and hurricanes, and this relationship between harm and support for climate change mitigation policy held across all event types,” Zanocco said. “This is surprising because some extreme weather events, such as tornadoes, have a relatively low scientific link to climate change.”

Researchers are still working to understand how changes in individual attitudes about climate change might transfer into broader community movements, Boudet said. One of the challenges for researchers and policymakers is navigating the line between capitalizing on changing attitudes to shift behavior and policy while not appearing to exploit a tragedy for seemingly politically-motivated reasons.

Another finding of note, Boudet said, is the alignment between objective measures of a weather event’s harm and people’s self-reported experience of harm from the event. That means that generally, the harm people reported experiencing matched up to the harms reported by other means, including news reports and government records.

One of the study’s limitations, Boudet noted, is that lack of data about participants’ beliefs before the extreme weather event in their community. Additional research is needed to confirm the findings of the study, she said. 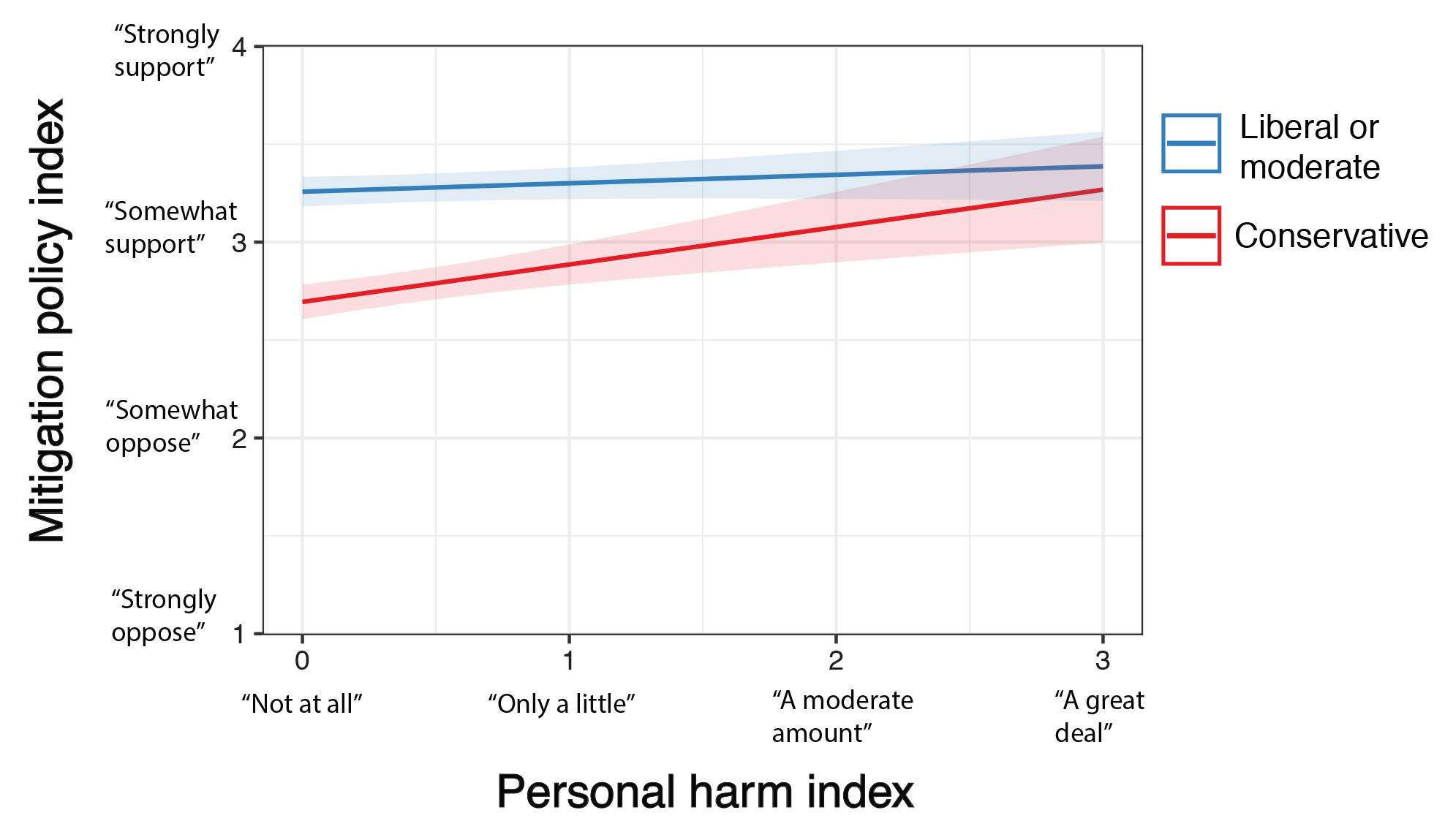