Not all materials with the structure, known as perovskites, are semiconductors. But perovskites based on a metal and a halogen are, and they hold tremendous potential as photovoltaic cells that could be much less expensive to make than the silicon-based cells that have owned the market since its inception in the 1950s.

John Labram of the OSU College of Engineering is the corresponding author on two recent papers on perovskite stability, in Communications Physics and the Journal of Physical Chemistry Letters, and also contributed to a paper published today in Science.

The study in Science, led by researchers at the University of Oxford, revealed that a molecular additive – a salt based on the organic compound piperidine – greatly improves the longevity of perovskite solar cells.

The findings outlined in all three papers deepen the understanding of a promising semiconductor that stems from a long-ago discovery by a German mineralogist. In the Ural Mountains in 1839, Gustav Rose came upon an oxide of calcium and titanium with an intriguing crystal structure and named it in honor of Russian nobleman Lev Perovski.

Perovskite now refers to a range of materials that share the crystal lattice of the original. Interest in them began to accelerate in 2009 after a Japanese scientist, Tsutomu Miyasaka, discovered that some perovskites are effective absorbers of light.

“Because of their low cost, perovskite solar cells hold the potential to undercut fossil fuels and revolutionize the energy market,” Labram said. “One poorly understood aspect of this new class of materials, however, is their stability under constant illumination, an issue which represents a barrier to commercialization.”

Over the past two years, Labram’s research group in the School of Electrical Engineering and Computer Science has built unique experimental apparatus to study changes in conductance of solar materials over time.

“Teaming up with the University of Oxford, we demonstrated that light-induced instability occurs over many hours, even in the absence of electrical contact,” he said. “The findings help clarify similar results observed in solar cells and hold the key to improving the stability and commercial viability of perovskite solar cells.”

Solar cell efficiency is defined by the percentage of power from sunlight hitting a cell that is converted to usable electrical power.

Seven decades ago, Bell Labs developed the first practical solar cell. It had a modest, by today’s standards, efficiency of 6% and was costly to make, but it found a niche in powering the satellites launched during the nascent days of the space race.

Over time, manufacturing costs decreased and efficiencies climbed, even though most cells have not changed very much – they still consist of two layers of nearly pure silicon doped with an additive. Absorbing light, they use the energy from it to create an electric current across the junction between them.

In 2012, one of Labram’s collaborators, Henry Snaith of Oxford, made the breakthrough discovery that perovskites could be used as the main component in solar cells, rather than just as a sensitizer. This led to a storm of research activity and thousands of scientific papers being published each year on the subject. Eight years of research later, perovskite cells can now operate at 25% efficiency – making them, at least in the lab, on par with commercial silicon cells.

Perovskite cells can be inexpensively manufactured from commonly available industrial chemicals and metals and can be printed onto flexible films of plastic and mass produced. Silicon cells, conversely, are rigid and made from thinly sliced wafers of almost pure silicon in an expensive, high-temperature process.

One issue with perovskites is their tendency to be somewhat unstable when temperatures rise, and another is a vulnerability to moisture – a combination that can make the cells decompose. That’s a problem for a product that needs to last two or three decades in open air.

“In general, to be able to sell a solar panel in the U.S. and Europe requires a 25-year warranty,” Labram said. “What that means in reality is the solar cell should show no less than 80% of its original performance after 25 years. The current technology, silicon, is pretty good for that. But silicon has to be expensively produced in temperatures of greater than 2,000 degrees Celsius under controlled conditions, to form perfect, defect-free crystals, so they function properly.”

Perovskites on the other hand are highly defect tolerant, Labram said.

“They can be dissolved in a solvent, then printed at close to room temperature,” he said. “This means they could eventually be produced at a fraction of the cost of silicon, and hence undercut fossil fuels. However, for this to happen, they need to be certifiable with a 25-year warranty. This requires us to understand and improve the stability of these materials.”

One path to the marketplace is a tandem cell made of both silicon and perovskites that could turn more of sunlight’s spectrum into energy. Lab tests on tandem cells have produced efficiencies of 28%, and efficiencies in the mid-30s seem realistic, Labram said.

“Tandem cells might allow solar panel producers to offer a performance beyond anything silicon alone might achieve,” he said. “The dual approach could help remove the barrier to perovskites entering the market, on the way to perovskites eventually acting as stand-alone cells.”

Semi-transparent, perovskite films may also one day be used on windows, or in greenhouses, converting part of the incoming sunlight to electricity while letting the rest pass through.

“When it comes to energy generation, cost is the most important factor,” Labram said. “Silicon and perovskites now show roughly the same efficiency. In the long term, however, perovskite solar cells have the potential to be made at a fraction of the cost of silicon solar cells. And while history has shown us that political action on climate change is largely ineffective, if you can generate electricity from renewable sources at a lower cost than fossil fuels, all you have to do is to make the product, then the market will take care of the rest.” 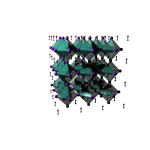 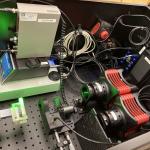