CORVALLIS, Ore. – The spread of western juniper and invasive grasses are major threats to the health of the sagebrush-steppe ecosystem.

A new study, published in the journal Rangeland Ecology and Management, finds that in areas already overrun by juniper and non-native grasses, juniper reduction efforts alone aren’t going to be enough to restore the area, and that the grass problem will increase.

Cutting down western juniper is a popular method for stemming the proliferation of the trees in the Northern Great Basin, said corresponding author Jacob Dittel, a postdoctoral researcher in OSU’s College of Agricultural Sciences. The Northern Great Basin encompasses large parts of Oregon, Idaho and Utah and nearly all of Nevada.

“The concern is that instead of reducing competition to native shrubs and grasses with juniper by cutting it, we may be swapping competitors by increasing invasive grasses,” Dittel said. “Additionally, we found twice as many juniper saplings underneath felled trees than in areas where there were no trees.”

The study results are important because agencies are investing hundreds of millions of dollars in juniper reduction treatments to increase native shrubs and grasses. Much of the focus of attention is habitat recovery of some of the ecosystem’s notable inhabitants, including the greater sage-grouse, Oregon’s prized mule deer herds and many other important wildlife species found in the sagebrush steppe.

Western juniper expansion has forced out sagebrush over tens of thousands of acres in the Northern Great Basin. The proliferation of the tree has degraded the sagebrush ecosystem by forming dense stands that suck up rainwater and push sagebrush out.

Invasive annual grasses are also a threat to the Northern Great Basin ecosystem. Plants such as cheatgrass and medusahead compromise habitat diversity for important wildlife species and provide fuel that could increase the frequency and intensity of wildfires.

“While juniper reduction treatments are incredibly important from a wildlife habitat and a range health perspective, when the understory is compromised we need to consider follow-up treatments such as herbicide and native shrub and bunchgrass seeding to shift the balance towards native recovery,” said Lisa Ellsworth, a range ecologist in OSU’s Department of Fisheries and Wildlife and co-author on the study.

The published study is part of a long-term OSU study in eastern Oregon, in collaboration with the Oregon Department of Fish and Wildlife (ODFW), that investigates the effects of juniper removal and post-fire management techniques on a sagebrush-steppe wildlife area identified as critical mule deer wintering habitat.

The study was conducted from 2012 to 2016 near Flat Creek in the ODFW-owned Phillip W. Schneider Wildlife Area, between the Ochoco and Malheur national forests. In 2012, ODFW created six, 2.4-acre blocks within the study site, with half of the block being fenced to keep grazing cattle and feral horses out and the other open to grazing.

The juniper was cut down with chain saws in the late winter and early spring of 2013, and the trees were left where they fell. In 2014, a large wildfire burned two of the three OSU study sites. The published study focuses on the unburned site.

The OSU research team recorded effects of the juniper cutting on the plant community within the unburned site in 2014, 2015 and 2016. There was an increase on average in both native forbs and invasive grasses. Invasive grasses were more predominant in areas of cutting than in non-cut areas.

“What we are seeing at this site is a general increase of invasive grasses in the understory, due to the juniper cuts,” Dittel said. “We didn’t see a strong response in perennial grasses or native grasses. We’re hoping that we’ll see the response further down the road.”

Indeed, preliminary results on the burned portions of the study area indicate that follow-up management, such as post-disturbance herbicide and seeding, can help suppress the invasive grasses and enable edible forage plants to get reestablished, said study co-author Dana Sanchez, professor and Extension wildlife specialist in OSU’s Department of Fisheries and Wildlife.

The large amount of juniper seedlings in the cut-areas also indicate that simply cutting down a juniper tree and leaving it where it lays probably won’t inhibit juniper expansion, Dittel said.

“Felling the tree stops the competition underground with the plants for water, but essentially they were dropping thousands of juniper seeds on the site,” Dittel said. “Those felled trees can act as a nurse plant – that microhabitat it could be wetter and cooler – which may facilitate juniper germination”

In another key finding, the researchers saw no difference in native or invasive plants between grazed and ungrazed treatments, so ODFW’s current low-intensity grazing regime is appropriate for the area.

The research team also included Ricardo Mata-Gonzalez, professor in the OSU Department of Animal and Rangeland Sciences, and Connor Morozumi, an OSU wildlife science graduate who is now a doctoral student at Emory University.

ODFW funded the majority of the study, and the Oregon Beef Council partially funded Mata-Gonzalez’s participation in the study. 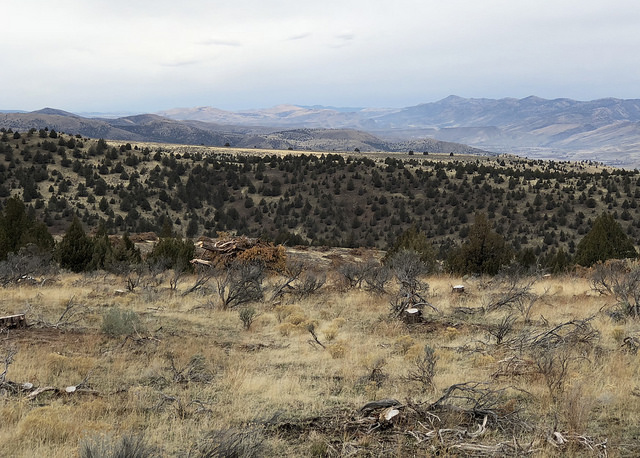