CORVALLIS, Ore. – The discovery of the first active methane seep in Antarctica is providing scientists new understanding of the methane cycle and the role methane found in this region may play in warming the planet.

A methane seep is a location where methane gas escapes from an underground reservoir and into the ocean. Methane seeps have been found throughout the world’s oceans, but the one discovered in the Ross Sea was the first active seep found in Antarctica, said Andrew Thurber, a marine ecologist at Oregon State University.

“Methane is the second-most effective gas at warming our atmosphere and the Antarctic has vast reservoirs that are likely to open up as ice sheets retreat due to climate change,” Thurber said. “This is a significant discovery that can help fill a large hole in our understanding of the methane cycle.”

The researchers’ findings were published today in the journal Proceedings of the Royal Society B. Co-authors are Sarah Seabrook and Rory Welsh, who were graduate students at OSU during the expeditions. The research was supported by the National Science Foundation.

Methane is a greenhouse gas that is 25 times more powerful than carbon dioxide at warming the planet. Most methane in the ocean water and sediment is kept out of the atmosphere by microbes that consume it.

Thurber and his colleagues discovered that the microbes around the Antarctic seep are fundamentally different that those found elsewhere in the world’s oceans. This helps researchers better understand methane cycles and the factors that determine whether methane will reach the atmosphere and contribute to further warming, Thurber said.

The Ross Sea seep was discovered in an area that scientists have studied for more than 60 years, but the seep was not active until 2011, said Thurber, an assistant professor in Oregon State's College of Earth, Ocean, and Atmospheric Sciences and the College of Science’s Department of Microbiology.

An expansive microbial mat, about 70 meters long by a meter across, formed on the sea floor about 10 meters below the frozen ocean surface. These mats, which are produced by bacteria that exist in a symbiotic relationship with methane consumers, are a telltale indication of the presence of a seep, said Thurber.

“The microbial mat is the road sign that there’s a methane seep here,” Thurber said. “We don’t know what caused these seeps to turn on. We needed some dumb luck to find an active one, and we got it.”

Thurber happened to be in Antarctica in 2012 when another researcher told him about a “microbial waterfall” and thought it was something he should look at. Thurber was able to confirm the seep’s presence, collect samples and analyze the seep and its environment. When he returned to the site in 2016 to conduct further study, he also discovered a second seep nearby.

Antarctica is believed to contain as much as 25 percent of Earth’s marine methane. Having an active seep to study gives researchers new understanding of the methane cycle and how that process might differ in Antarctica compared to other places on the planet, Thurber said.

For example, researchers have found that the most common type of microbe that consumes methane took five years to show up at the seep site and even then those microbes were not consuming all of the methane, Thurber said. That means some methane is being released and is likely working its way into the atmosphere.

Studying the site over a five-year time span allowed researchers to see how microbes respond to the formation of a seep, said Seabrook, who earned her doctorate at OSU and is now a post-doctoral scholar at the National Institute of Water and Atmospheric Research in Wellington, New Zealand.

“What was really interesting and exciting was that the microbial community did not develop as we would have predicted based on other methane seeps we have studied around the globe,” she said.

Researchers had assumed that microbes should respond really quickly to changes in the environment, but that wasn’t reflected in what OSU’s team saw in Antarctica, Thurber said.

“To add to the mystery of the Antarctic seeps, the microbes we found were the ones we least expected to see at this location,” he said. There may be a succession pattern for microbes, with certain groups arriving first and those that are most effective at eating methane arriving later.

“We’ve never had the opportunity to study a seep as its forming or one in Antarctica, because of this discovery we can now uncover whether seeps just function differently in Antarctica or whether it may take years for the microbial communities to become adapted,” Thurber said.

“Animals in Antarctica are very different than elsewhere in the world as the continent has been separated from the rest of the globe for more than 30 million years – a long time for evolution to act,” he said. “That has resulted in a remarkable diversity of fauna that we only find there. That may also contribute to the differences in microbes there.”

It is important to understand how methane seeps behave in this environment so researchers can begin factoring those differences into climate change models, Thurber said. He hopes to return to the site to monitor its evolution and conduct further research. 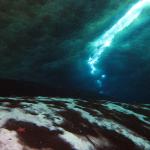 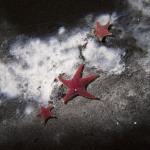 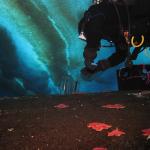