CORVALLIS, Ore. – An Oregon State University-led project to build the nation’s first pre-permitted wave energy testing facility cleared a critical hurdle this week as the federal Bureau of Ocean Energy Management awarded the university a lease to operate in federal waters about seven miles off the Oregon Coast.

The lease for PacWave South is the first marine renewable energy research lease the Bureau of Ocean Energy Management has issued in federal waters off the West Coast. The estimated $80 million facility will be located offshore southwest of Newport, Oregon.

The project still must receive licensing approval from the Federal Energy Regulatory Commission before it can move forward. Obtaining the lease is an essential component of the licensing requirements.

“We appreciate the support of the leadership in the Department of Interior, the Bureau of Ocean Energy Management and the Department of Energy who see the value in this important work to develop alternative energy sources and have helped to move this project forward,” said Oregon State University President F. King Alexander. “We are particularly thankful for the consistent support from members of the Oregon federal delegation who have championed PacWave South from the outset, including Sens. Ron Wyden and Jeff Merkley and Reps. Suzanne Bonamici and Kurt Schrader.”

Wave energy has the potential to provide clean, reliable electricity to meet the world’s rising energy demands, experts say. Globally, the marine energy market is projected to reach nearly $700 billion by 2050, and the World Energy Council estimates that 10% of the worldwide electricity demand could be met by harvesting ocean energy.

PacWave South will be the first pre-permitted, full-scale, utility grid-connected wave energy test site in the United States. It is designed to allow wave energy developers the opportunity to test different technologies for harnessing the energy of ocean waves.

Oregon State officials have completed the FERC application process and are hopeful the license will be issued soon. Current timelines suggest construction could begin this summer, and the facility should be operational by 2023.

“The PacWave team initiated this collaborative process with several federal and state agencies nearly a decade ago,” said Burke Hales, the chief scientist for the project and a professor in Oregon State's College of Earth, Ocean, and Atmospheric Sciences. “We’re excited for the opportunity to finalize this stage of the project and move a major step closer to construction.”

The PacWave ocean test site will be located about seven miles offshore on a sandy-bottomed stretch of the Pacific Ocean away from popular commercial and recreational fishing reefs. The ocean site will have four different testing “berths,” which combined can accommodate up to 20 total wave energy devices at any one time. Five power and data cables buried below the seafloor will connect the ocean test site to a shoreside facility southeast of Seal Rock.

PacWave South is supported by grants from the U.S. Department of Energy, the state of Oregon and other public and private entities. Oregon State’s College of Earth, Ocean, and Atmospheric Sciences is managing the construction and operation of the facility. 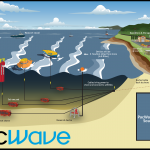