Following her operation on Dec. 19, 3-year-old Vietnamese potbelly pig Ella is doing well and is currently recuperating from the procedure at the Lois Bates Acheson Veterinary Teaching Hospital in OSU’s Carlson College of Veterinary Medicine.

Ella needed the surgery because she had chronic ear infections and had gone through several months-long rounds of antibiotics, said Jessica Vasselin from the nonprofit Morningside Farm Sanctuary in Veneta, Oregon, where Ella has lived for about two years after being rescued from a hoarding situation in California.

Total ear canal ablation is the full removal of the ear canal and is commonly done in dogs. But OSU veterinary surgeon Dr. Katy Townsend couldn’t find any record of it being performed on pigs, whose external ear canals are mostly housed in a bony column, making access difficult for surgery.

While pig ears are very different from dog ears, they are a great model for human ears, so Townsend called her own doctor for advice. Portland otologist Dr. Timothy Hullar operated on her five years ago to correct a condition called otosclerosis, in which the bones of the inner ear fuse and cause deafness.

“He always said to me, ‘If you ever want to collaborate on anything, I would love to,’” Townsend recalled. “After reading this research and finding that pigs have really similar ear canals to humans, I emailed him and said, ‘Hi, do you remember me?’ And he said he’d love to help.”

Townsend and Hullar collaborated to get a 3-D printed skull based on a CT scan Ella received at OSU. Fellow OSU veterinarian Dr. Susanne Stieger-Vanegas assisted with the diagnostic imaging and printing, which helped the team visualize and plan how they would perform the surgery.

“I look at ear scans five times a day, but it’s not so common that pigs get them,” said Hullar, who also works at the Veterans Affairs Portland Health Care System. “The anatomy there made sense to me — the external ear on a pig is completely different from on a human, but the inner ear and middle ear have some similarities.”

Ella’s ear infections caused her a lot of pain, along with neurological issues that led to her being unable to walk at times from loss of equilibrium.

The surgical team came up with plans A, B, C and D so they could pivot if any challenges arose during the procedure, but in the end, only Plan A was necessary. Within half an hour of surgery, Ella was awake and back to eating carrot chips, her favorite snack.

“Everything went really well,” Townsend said. “She still has a bit of a head tilt, and that may not resolve, but it makes her look quizzical — it adds to her charm.”

After Townsend removed Ella’s ear canal, OSU’s small animal internal medicine team removed a grape-sized mass from above her soft palate, which they think might have been blocking her Eustachian tube.

“It went as beautifully as it possibly could have, and everybody is really ecstatic with the success so far,” Vasselin said. “Everybody feels like it was a really cool surgery, and they learned a lot from it. She deserves this. She deserves to finally live a healthy life and not have to worry about this type of stuff anymore, so we’re really hopeful for her.”

Hullar said this collaboration helped broaden his horizons, and he feels that both human and animal doctors could benefit more from communicating and spending more time together. For example, at OSU he learned about a new formulation of a post-operative pain medicine used in animals that he’s interested in researching for human application.

“That exchange of information — it doesn’t just go one way,” he said.

Townsend said she and Hullar hope to write up the case report for other doctors to learn from.

“The biggest takeaway is showing that, for people who love fairly nontraditional pets, we can provide expert care to any animal,” she said. “The collaboration between all of our teams was so incredible. I think it just pushes the envelope forward on what we can achieve with nontraditional pets and making sure all pets have access to expert-level care.”

Correction: Dec. 27, 2022: An earlier version of this news release listed the wrong date for the surgery. The surgery took place Monday, Dec. 19. 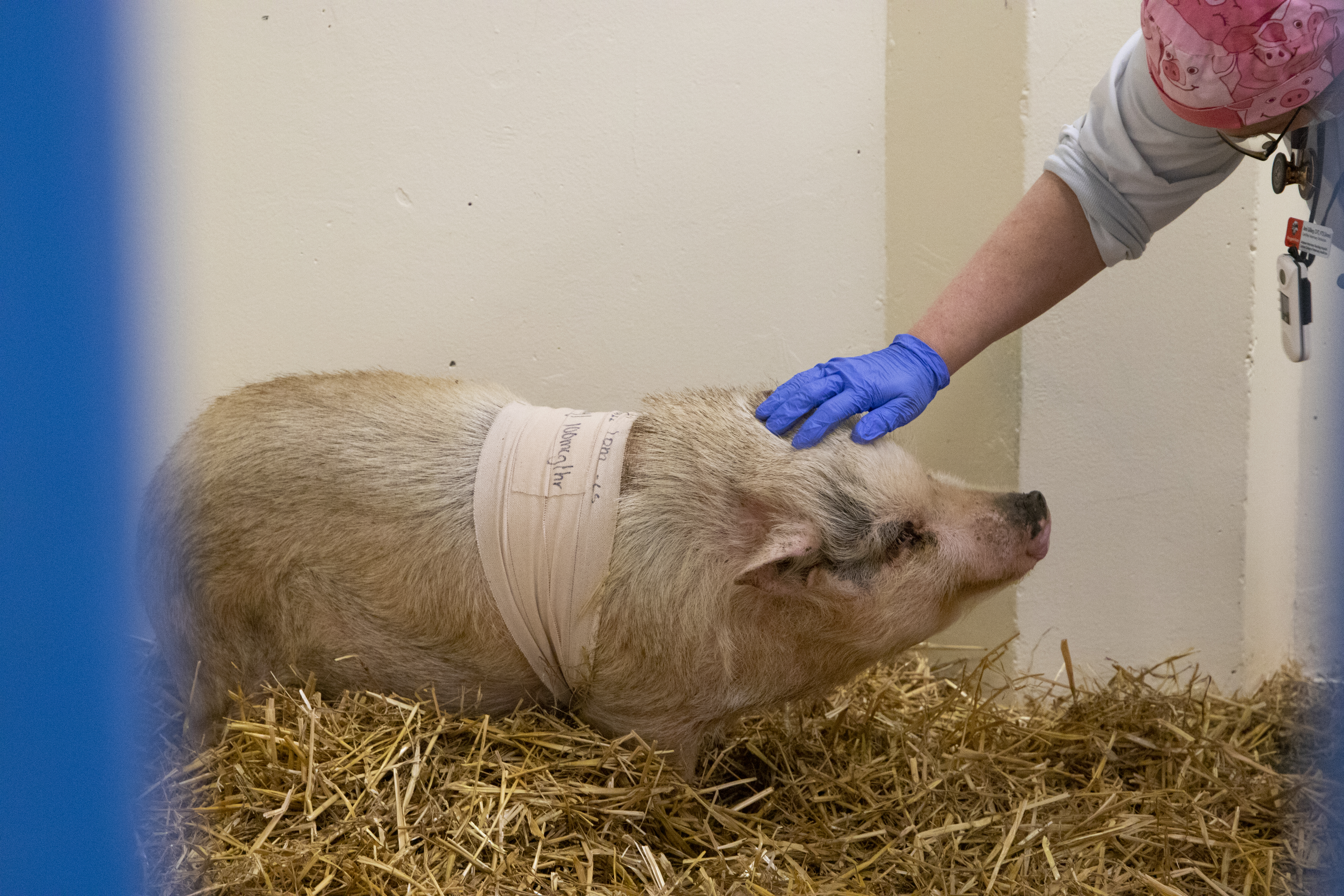