NEWPORT, Ore. – A new study of the genetic profiles of wild and hatchery coho salmon demonstrates important distinctions in how the two types of fish form mating pairs.

These findings by Oregon State University researchers provide new insight into subtle differences between wild and hatchery fish that could lead to changes in how hatchery fish are mated to promote the success of hatchery fish and conserve and protect wild fish.

“Genes can give us insight that we could not perceive using human sensory perception. I can see differences in size and color, but genes give us information about things we can’t see, hear or feel,” said Heather Auld, a post-doctoral research associate at Oregon State University’s Coastal Oregon Marine Experiment Station and the study’s lead author.

The researchers’ findings were published recently in the journal Integrative Organismal Biology.

Wild coho salmon are listed as threatened under the U.S. Endangered Species Act throughout much of their range, including along the Oregon Coast and lower Columbia River, due to overfishing, pollution, other losses associated with their freshwater habitat and poor ocean conditions related to climate change.

Efforts 40 years ago to bolster the abundance focused heavily on producing hatchery fish, but wild salmon proved better at reproduction than those from hatcheries. Researchers also found that hatchery-spawned fish may have a negative impact on wild fish and their ability to reproduce.

“It has been demonstrated across four salmon species that hatchery fish that breed in the wild are not as viable as wild fish. And should they breed with wild fish, there is risk of drawdown of the number of offspring that result from wild fish,” said co-author Michael Banks, a fisheries genomics, conservation and behavior professor in OSU’s Department of Fisheries, Wildlife, and Conservation Sciences and the Coastal Oregon Marine Experiment Station at OSU’s Hatfield Marine Science Center. “What we’re trying to find now is a way to make a better hatchery fish that doesn’t have drawdown impacts on the wild fish.”

Using genetic material collected from fin clips, the researchers conducted genotype sequencing, where an individual fish’s entire genome is scanned for specific markings and analyzed to reveal the genetic profiles of hundreds of wild and hatchery fish.

They found that both hatchery and wild fish tend to demonstrate negative assortment – meaning they look for mates that are different from themselves, genetically. Negative assortment is a common finding in mating because mating for difference is a way to improve resistance to disease, Banks said.

Using information from this study and previous work, the researchers are now trying to better emulate the natural mating of coho salmon in a hatchery environment. Working out of the Sandy Hatchery on Cedar Creek, a tributary of Oregon’s Sandy River, the researchers are collecting tissue samples from fish that have returned to spawn and then attempting to find genetic matches similar to those found among wild fish.

“We are doing a directed spawn where we are trying to emulate nature,” Banks said. “This is not a simple feat because we observed from nature that most genes are associated with choosing a mate that is different, but also some genes are associated with choosing something similar. We are not familiar with other breeding attempts that invoked both disassortive as well as assortive strategies within the same mating decisions.”

The researchers worked with Dana Gibbon, a bioinformatics analyst from the Center for Quantitative Life Sciences, to develop a new computer algorithm, called MultiFaceted CHOICE, to provide best choices among males and females arriving on the spawning table.

“Some of the jacks will be starting to come back this year, and we expect all returns from next fall through 2025 will be from our experiment,” Auld said. “We will continue to keep taking genetic samples throughout that period to determine if this process was successful.

“Depending on what we find, this could potentially alter how we mate hatchery fish. And it may result in hatchery fish that are more like wild fish and have less impact on wild fish.”

Co-authors of the study are lab manager David Jacobson of OSU’s Department of Fisheries, Wildlife, and Conservation Sciences and the Coastal Oregon Marine Experiment Station at OSU’s Hatfield Marine Science Center; and Adelaide Rhodes, previously with OSU’s Center for Quantitative Life Sciences and now working at the National Institutes of Health.

The research was supported by an award from the Oregon Hatchery Research Center Fund administered by the Oregon Department of Fish and Wildlife. 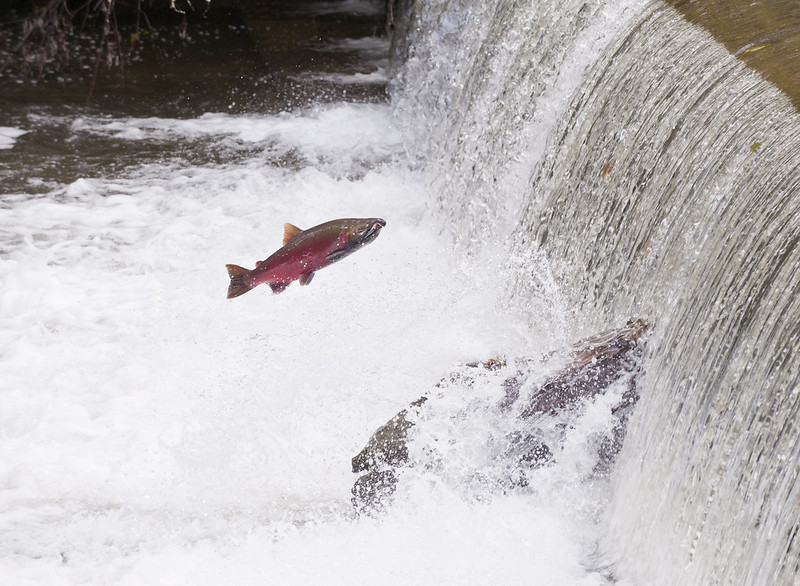