NEWPORT, Ore. – Analyzing thousands of genetic markers in albacore tuna from the Pacific Ocean, researchers at Oregon State University have learned that just seven dozen of those markers are needed to determine which side of the equator a fish comes from.

The scientists also discovered that fish from different hemispheres intermingle and sometimes breed with each other.

Published Tuesday in Evolutionary Applications, the findings are an important step toward better understanding the population structure of a species that’s a vital and inexpensive source of protein for people around the globe.

Albacore in the North and South Pacific Oceans are currently managed as separate stocks. The OSU study affirms this approach while also opening the door to more research into overlap and interbreeding that can be used to refine management strategies throughout the Pacific.

“Albacore support one of the world’s largest and most valuable fisheries and one that is particularly important on the west coast of North America,” said Kathleen O’Malley, an associate professor in the OSU College of Agricultural Sciences. “There’s been a lot of work done to understand stock structure of the albacore globally, but research in the Pacific hasn’t been very fine-tuned and has tended to generate as many questions as answers.”

O’Malley, who is also the fisheries geneticist for the state of Oregon, noted that previous research involving tagged fish has revealed no movement of albacore from one side of the equator to the other. At the same time, previous genetic data have yielded no way to tell if a fish was from the North Pacific or South Pacific – hence the lack of understanding regarding the connectivity between the two populations.

O’Malley and postdoctoral research associate Felix Vaux, who led the study, looked at DNA from 308 fish from 12 locales around the Pacific. They identified nearly 13,000 genetic markers – DNA sequences with known physical locations on chromosomes – and learned that fewer than 100 of those markers told the tale of what part of the ocean a fish came from.

“We identified 12,872 markers and were able to discriminate between North and South Pacific albacore by using only 84 of them,” Vaux said.

Those 84, he added, appear to be “under selection” and may reflect adaptive differences between the two albacore stocks. In any population, individuals with locally adapted traits tend to be the most successful reproductively, meaning that over time selection will increase the prevalence of those traits. With continuing, intense selection, adaptive traits become universal or close to it in a population or species.

“There is no complete genome for albacore to compare our data against, so we weren’t able to determine which genes underlie these likely adaptive differences,” O’Malley said. “In addition, we found that some fish have mixed genetic backgrounds – indicating that albacore from the North and South Pacific sometimes spawn at the same time and place and breed together. Also, we detected albacore with South Pacific genetic profiles in the North Pacific, providing evidence for migration across the equator that had earlier gone undetected via physical tagging data.”

Future studies, she added, will use these genetic markers to more deeply investigate interbreeding between North and South Pacific albacore as well as migration between hemispheres.

O’Malley, who directs the State Fisheries Genomics Lab at OSU’s Hatfield Marine Science Center, says that both genetic and demographic connectivity, while important for effective management and conservation strategies, are not well understood in most marine species.

Genetic diversity is an important tool for populations trying to adapt to climate change and other environmental perturbances, she said. With more variation, it is more likely that some individuals in a population will be suited to withstand the changes and produce offspring that are also able to thrive in the modified environment.

Collaborating with O’Malley and Vaux on this research were Sandra Bohn of the State Fisheries Genomics Lab and John Hyde of the National Marine Fisheries Service. This research arose from conversations with and support from commercial fishermen associated the American Fishermen’s Research Foundation, Western Fishboat Owner’s Association and the Oregon Albacore Commission.

Vaux is now a postdoctoral fellow at the University of Otago in Dunedin, New Zealand. 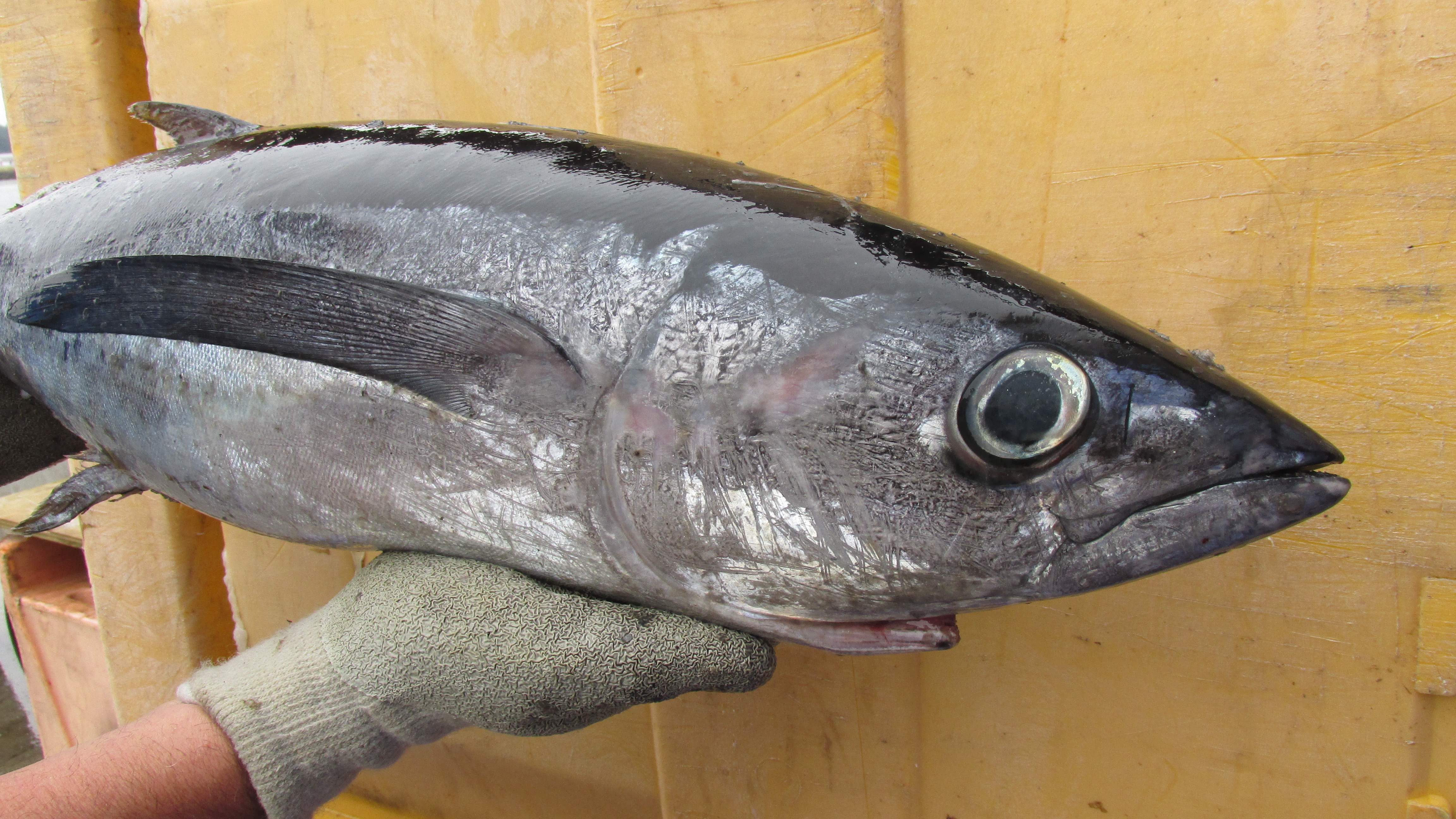