CORVALLIS, Ore. – Researchers have identified a protein that powers the virulence of the bacteria that causes gonorrhea, opening the possibility of a new target for antibiotics and, even better, a vaccine.

The findings, published today in PLOS Pathogens, are especially important since the microbe, Neisseria gonorrhoeae, is considered a “superbug” because of its resistance to all classes of antibiotics available for treating infections.

Gonorrhea, a sexually transmitted disease that results in 78 million new cases worldwide each year, is highly damaging if untreated or improperly treated.

It can lead to endometritis, pelvic inflammatory disease, ectopic pregnancy, epididymitis and infertility. Babies born to infected mothers are at increased risk of blindness.

“The infections very often are silent,” said Oregon State University researcher Aleksandra Sikora. “Up to 50 percent of infected women don’t have symptoms, but those asymptomatic cases can still lead to some very severe consequences for the patient’s reproductive health, miscarriage or premature delivery.”

The need for better antibiotic therapy, and a vaccine, is pressing. N. gonorrhoeae strains resistant to the last effective treatment options have emerged, and failures in treatment are occurring.

Sikora and her research team at the OSU/OHSU College of Pharmacy and Ann Jerse’s lab at the Uniformed Services University of the Health Sciences in Bethesda, Maryland, collaborated to discover a novel lipoprotein that N. gonorrhoeae uses to defeat the body’s first line of innate immune defense.

The body relies on enzymes known as lysozymes that, as their name suggests, thwart bacteria by causing their cell wall to lyse, or break apart. Lysozymes are abundant both in epithelial cells, which make up the tissue on the outside of organs and the inside of body cavities, and in the phagocytic cells that protect the body by ingesting foreign particles and bacteria.

In turn, many gram-negative bacteria – characterized by their cell envelope that includes a protective outer membrane – have developed ways of defeating lysozymes. Prior to the work by Sikora’s team, however, only one lysozyme-fighting protein had been discovered in the Neisseria genus.

Now that new targets have been identified, they can be explored as bullseye candidates for new antibiotics or a vaccine – if the lysozyme inhibitor can itself be inhibited, then the bacteria’s infection-causing ability is greatly reduced.

Studying SliC’s function in culture as well as in a gonorrhea mouse model – mice were infected with N. gonorrhoeae, then checked for SliC expression at one, three and five days – researchers determined the protein was essential to bacterial colonization because of its anti-lysozyme role.

“This is the first time an animal model has been used to demonstrate a lysozyme inhibitor’s role in gonorrhea infection,” Sikora said. “Together, all of our experiments show how important the lysozyme inhibitor is. This is very exciting.” 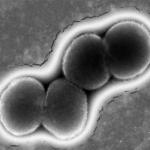