Great scat! Bears – not birds – are the chief seed dispersers in Alaska

CORVALLIS, Ore. – It’s a story of bears, birds and berries.

In southeastern Alaska, brown and black bears are plentiful because of salmon. Their abundance also means they are the primary seed dispersers of berry-producing shrubs, according to an Oregon State University study.

The OSU team used motion-triggered cameras to record bears, birds and small mammals eating red berries of devil’s club, and retrieved DNA in saliva left on berry stalks to identify the species and sex of the bears. Researchers found that bears, while foraging, can disperse through their scat about 200,000 devil’s club seeds per square kilometer per hour. Rodents then scatter and hoard those seeds, much like squirrels hoard acorns.

The study was published today in the journal Ecosphere.

In most ecosystems, birds generally are thought of as chief dispersers of seeds in berries, said Taal Levi, an ecologist in OSU’s College of Agricultural Sciences and co-author on the study. The researchers found that birds accounted for only a small fraction of seed dispersal.

This is the first instance of a temperate plant being primarily dispersed by mammals through their gut, and suggests that bears may influence plant composition in the Pacific Northwest.

It was well-known that bears were dispersing seeds through their scat, Levi said, but it was not known that they were dispersing more seeds than birds, or the relative contribution of brown and black bears to seed dispersal, or whether the two species bears were eating berries at different times of the year.

“Devil’s club is extremely abundant in northern southeast Alaska, so it didn’t seem plausible that birds were dispersing all this fruit,” Levi said. “Bears are essentially like farmers. By planting seeds everywhere, they promote a vegetation community that feeds them.”

The researchers found that in the study area along the Chilkat and Klehini rivers in southeastern Alaska, brown bears dispersed the most seeds, particularly before salmon became widely available. They also found that after the brown bears switched from eating berries to salmon later in the season, black bears moved in and took over the role as principal seed dispersers. Black bears are subordinate to brown bears and avoid them.

The fruit on a devil’s club stalk is clustered into a cone containing berries. The researchers observed through the camera recordings that brown bears can swallow an estimated 350 to 400 berries in a single mouthful. Birds, on the other hand, consumed on average 76 berries per plant that they visited.

“That’s pretty remarkable,” Levi said. “When birds visit these shrubs, they take a few berries and fly off. They don’t eradicate the cones like a bear.”

Brown bears, also known as grizzlies, are extinct in Oregon and California and are nearly extinct in Washington.

“The indirect effect of salmon is that they support abundant bear populations that then disperse a lot of fruit,” Levi said. “We’ve lost the salmon-bear ecosystem that once dominated the Pacific Coast. That has implications for the plant community. These seed dispersal pathways through brown bears are all but eliminated. The degree to which black bears can fulfill that role is not clear.” 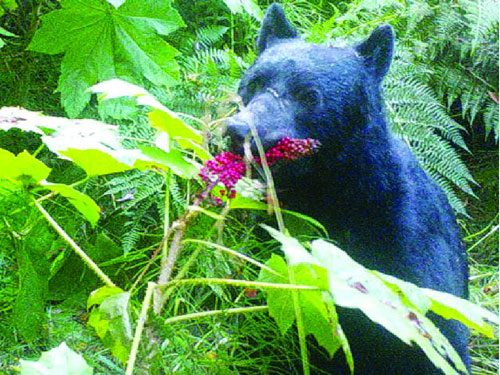