CORVALLIS, Ore. – New research shows that honeybees prioritize the nutritional status of larvae when selecting for a new emergency queen.

The U.S. Department of Agriculture-funded study is published in the journal Scientific Reports and is the result of a research collaboration between entomologists at Oregon State University and North Carolina State University.

This is the first study that has thoroughly investigated the role of nutritional state of larvae in their selection for queen rearing, said lead author Ramesh Sagili, associate professor of apiculture and honeybee Extension specialist in OSU’s College of Agricultural Sciences.

Honeybee colony fitness is dependent on queens, so their production is a vital task. If the current queen dies, emergency queens must be reared. Worker bees then select few larvae from the existing pool to raise new queens. The colony only has about six days after the last egg was laid to begin rearing new queens.

“It’s all about survival,” Sagili said. “The bees have to pick the most fit individual to lead the colony. The queen is the most vital individual in the hive. There was some thought in the past that maybe it was ‘kinship’ or ‘nepotism’ selection, in which the workers recognize their close relatives [same father and mother] and rear those larvae preferentially to make queens.”

This study provides valuable insights pertaining to honeybee queen rearing that could benefit a beekeeping industry that is struggling, according to Sagili.

Because previous research has shown that worker bees can differentiate hungry larvae from well-fed larvae, the researchers decided to test whether nutritional state was a factor in selecting which larvae to rear as emergency queens.

They established observation hives in which they artificially deprived one group of larvae of brood food – known as royal jelly – while allowing the other group to be fed, and then measured nurse bee responses to those larvae.

They also compared two queen-rearing methods – grafting and natural. For each method, they created groups of deprived and non-deprived larvae, placed them in experimental colonies experiencing emergency queen-rearing conditions and then measured how many queens were reared to pupation from each treatment group.

There was no significant difference in the percentage of larvae selected for queen rearing between larvae that were genetically related or not related to the nurses.

“The bees were still selecting larvae for queen rearing mainly based on deprived and non-deprived nutritional states,” said Sagili, who helped create the Oregon Master Beekeeper Program in 2010 and chaired the Governor’s Task Force on Pollinator Health in 2014. 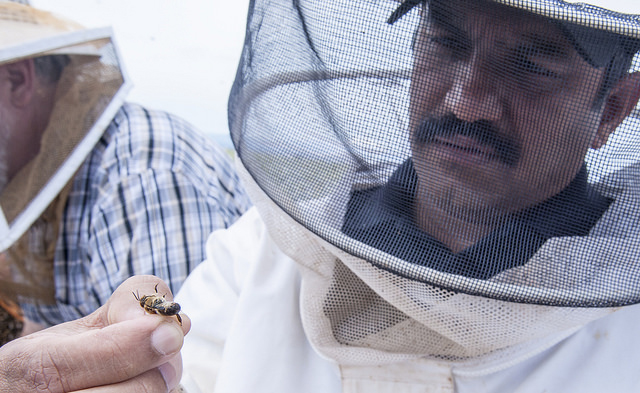