CORVALLIS, Ore. – Research on the ground following two large wildfires in California’s Sierra Nevada mountain range showed the vast majority of carbon stored in trees before the blazes was still there after the fires.

Published in the journal Forests, the findings are an important step toward understanding the connection between wildfires and climate-change-inducing carbon emissions, according to a scientific collaboration that included Mark Harmon of Oregon State University.

Carbon dioxide, a product of combustion, is a major greenhouse gas and one of the primary causes of climate change.

Knowing how much carbon is released during fires can help inform decisions about the carbon storage and emissions implications of forest management decisions, say the scientists.

While satellite- and LiDAR-based research has suggested as much as 85% of living trees’ biomass combusts in California’s big fires, the study led by Harmon, professor emeritus in the OSU College of Forestry, indicates the amount of combusted biomass is less than 2%.

“The general impression the public has is that much of a forest is combusted in a megafire, and that’s usually what’s been presented in the press,” Harmon said. “But that did not match what we were observing, so we did a very detailed study examining the combustion process at different levels of the fire system, starting with twigs and ending up at the level of the entire fire.”

Harmon, fire ecologist Chad Hanson of the John Muir Project and Dominick DellaSala, chief scientist with the Wild Heritage Project, looked at the Creek Fire, which affected nearly 400,000 acres beginning in September 2020, and the Rim Fire, which started in August 2013 and spread across more than 250,000 acres.

The scientists spent four years on the ground in the fire areas, studying and calculating combustion rates at the level of branches, trees, stands of trees and landscapes to determine the amount of carbon that remained in trees versus what was released into the atmosphere.

“The estimates of the percentage of trees combusted in large fires are all over the place – they are often high – and this has been a major concern in the recent literature, suggesting that better estimates are needed,” Harmon said. “Our work delivers one such estimate, one that provides a framework to synthesize combustion rates at different levels of the forest and different levels of fire severity.”

“While many field scientists likely would not find our results surprising, there were recent peer-reviewed published estimates of up to 85% live tree combustion from the Rim Fire,” Harmon said. “Other studies based on a literature review suggest up to 65% of the live trees could have been combusted in high-severity patches. No one in the peer-review process questioned the results.”

Even in severe fire patches the larger-size trees showed low combustion rates – less than 5%, Harmon said. Large trees account for the majority of a forest’s biomass, leading to the low overall combustion rates at the stand level, he explained.

“Even for megafires classified as high severity, much of the area within the fire perimeter burned at low and moderate severity with less than 0.5% live tree combustion at the stand level,” Hanson added. “This study demonstrates the value of ground-based studies to inform policy decisions and management. Removing vegetation over vast areas is likely to lead to more cumulative carbon emissions than large fires themselves.”

Scientists are increasingly emphasizing the importance of storing more carbon in mature, older trees whether forests have burned or not, DellaSala said, as a way to curb total greenhouse gas emissions.

“We suggest that researchers and policy makers avoid using combustion rates not based on field study as they appear to overstate the wildfire emissions used in carbon emissions reporting; this can potentially misdirect climate mitigation policy,” he said.

Dead trees decompose slowly as new vegetation grows and absorbs atmospheric carbon, the scientists point out. If fire-killed trees are allowed to remain in place, the natural decomposition process might take decades to hundreds of years to release the trees’ carbon.

On the other hand, if those trees are logged to serve as energy-producing biomass, that same carbon could potentially enter the atmosphere much faster. More study is needed, the researchers note, to determine the degree to which post-fire forest management influences the carbon release time frame, including how biomass energy might offset the burning of fossil fuels and how wood products release carbon as they are used and disposed.

“The effects of salvaging and putting some of that wood into durable wood products need to be fully investigated,” Harmon said. “More fires need to be examined using our type of approach to determine how variable the combustion rates are at different levels for different forest types and ages.” 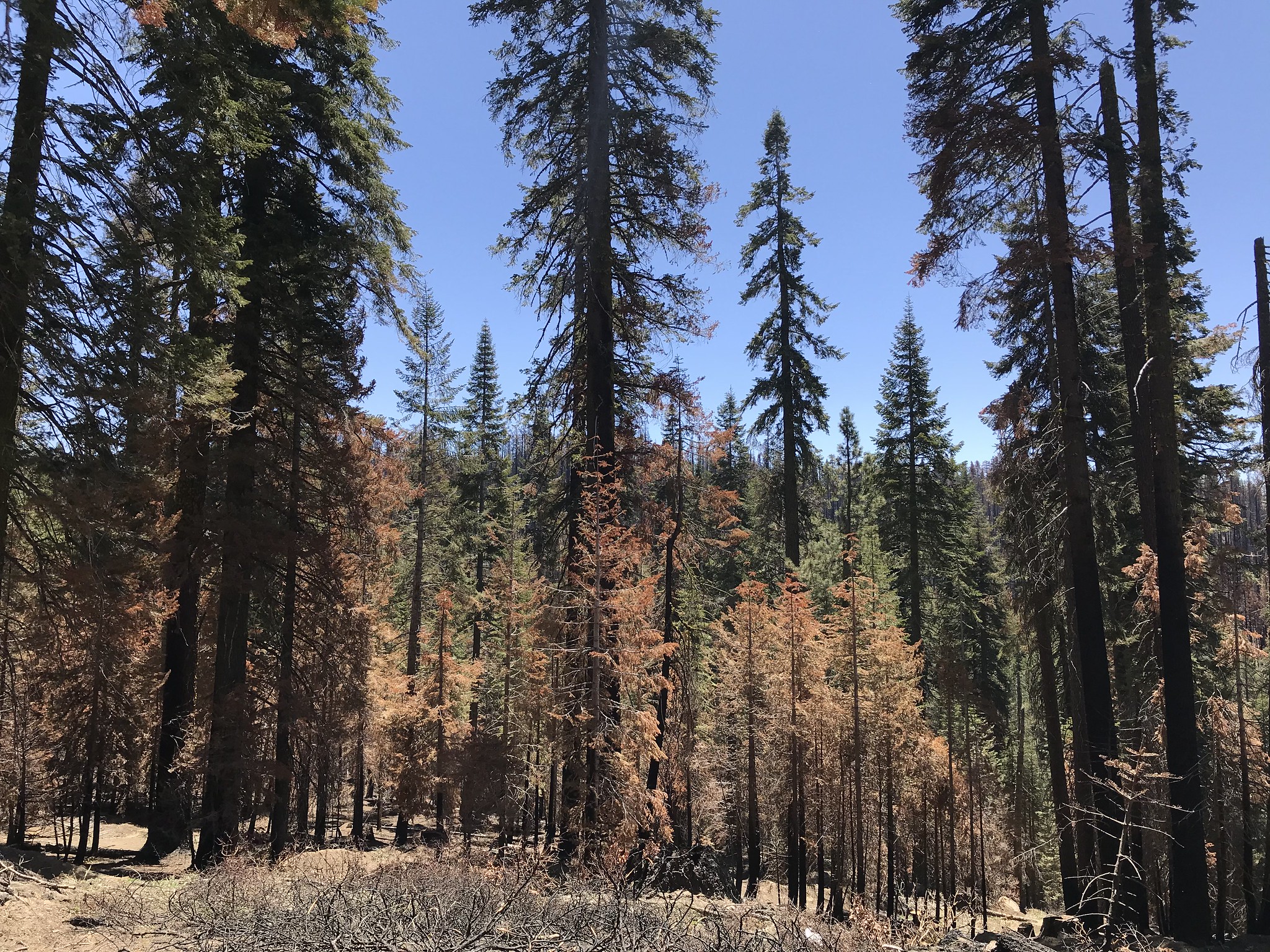