Ice discharge in the North Pacific set off series of climate events during the last ice age, study finds

The discovery provides new insight into the impact rapidly melting ice flowing into the North Pacific may have on the climate across the planet, said Maureen Walczak, a paleoclimatologist in Oregon State University’s College of Earth, Ocean, and Atmospheric Sciences and the study’s lead author.

“Understanding how the ocean has interacted with glacial ice in the past helps us predict what could happen next,” Walczak said.

The Cordilleran ice sheet once covered large portions of western North America from Alaska to Washington state and western Montana. Radiocarbon dating and analyses of the marine sediment record revealed that recurrent episodes of discharge from this ice sheet over the past 42,000 years were early events in a chain reaction of disturbances to the global climate. These disturbances triggered changes in deep ocean circulation and retreat of ice sheets in the North Atlantic.

The findings challenge theories that those massive, globally-reaching disturbances originated in the North Atlantic as rapid ice loss from the Laurentide ice sheet, another massive ice sheet that covered much of Canada and the northern United States, including the upper Midwest and Northeast. The Laurentide ice loss events are known as Heinrich Events.

“The outcome of this research was unexpected. The data irrevocably says that the Pacific ice goes first, with Heinrich Events and other changes following in a rhythm. The Pacific Ocean sets the drum beat,” Walczak said. “This is a paradigm shift in our thinking about how these events are connected.”

To gain insight into the climate history of the North Pacific, an international team of researchers collected and analyzed sediment cores from the northern Gulf of Alaska that were recovered by drilling as part of the International Ocean Discovery Program.

“Getting these new insights took years of work. We first mapped the seafloor and recovered short sediment cores in 2004, drilled longer cores in 2013 and had 16 years of painstaking laboratory work involving several Ph.D. students,” said Alan Mix, the project’s principal investigator and co-author of the paper.

“This was a virtually unknown area when we started, and now it offers among the most detailed and best-dated long records of ocean change on the planet during the ice age,” said Mix, a distinguished professor in OSU’s College of Earth, Ocean, and Atmospheric Sciences.

The research team traced the source of the ice-rafted debris back to purges of massive ice streams emanating from the Cordilleran ice sheet, which covered northern Washington, most of British Columbia and southern Alaska from about 70,000 to 17,000 years ago.

Dirty icebergs broke off from surging ice streams and drifted northward in ocean currents, carrying and eventually dropping their load of sand, pebbles and gravel, leaving a record of rapid ice retreat buried in the deep sea like sunken treasure.

The authors of the study named these Alaskan iceberg dumps “Siku Events” after the Inuit word for ice. The big surprise, discovered by combining the record of glacial debris with the radiocarbon chronology, was that Siku Events immediately preceded Heinrich events, which are a similar type of ice purge in the North Atlantic.

Scientists have been aware of Heinrich Events, from similar evidence of ice-rafted debris in the North Atlantic, for more than 30 years but the trigger for those events has never been convincingly explained, the researchers said.

It makes sense for the Pacific Ocean to be involved in major planetary changes, Mix said. The Pacific Ocean is connected to the rest of the world by large-scale atmospheric circulation and physically around Antarctica, and during times of high sea level, through the Bering Strait and the Arctic Ocean to the North Atlantic.

“The Pacific Ocean is the largest exchangeable reservoir of heat and water and carbon dioxide on Earth, simply because of its massive size,” he said. “It really is the 800-pound gorilla in the zoo of climate beasts.”

Today the ice that remains along the coast of Alaska is mostly retreating and may be gone within this century as the climate warms. The melting ice will drain to the Pacific and the Arctic, contributing to sea level rise and impacting the balance of buoyant fresh and dense salty water in the ocean, much as it did in the past.

If the current ice melt follows patterns of the past, and happens quickly, it could contribute to the retreat of distant glacial systems in the North Atlantic and the Arctic.

“This is yet another reason that it is prudent to slow down warming by reducing our fossil-fuel use,” Mix said.

“The new findings are likely to fuel increased interest in the North Pacific, an area that has not been as well-studied as other parts of the planet,” Walczak said.

“Why did the other ice sheets respond to the retreat of the Cordilleran? How fast do the dominoes fall in this sequence of events?” Walczak asked. Those are among the questions the research team is continuing to investigate.

Additional coauthors of the study include Andreas Schmittner, Joseph Stoner, Brian Haley; and June Padman, all of OSU’s College of Earth, Ocean, and Atmospheric Sciences; Jianghui Du, who recently earned his doctorate at Oregon State; Jay Alder of OSU and the U.S. Geological Survey; Summer Praetorius, previously of OSU and now at the U.S. Geological Survey; Ellen Cowan of Appalachian State University; Stewart Fallon and L. Keith Fifield of Australian National University; and Sarah Zellers of University of Central Missouri. 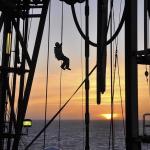 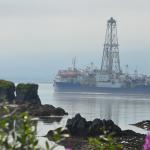