The findings in a new study published in the Journal of Dairy Science could provide guidance for the U.S. Food and Drug Administration as it reviews its Grade “A” Pasteurized Milk Ordinance, said Lisbeth Goddik, professor and OSU Extension Service specialist in dairy processing in OSU’s College of Agricultural Sciences.

The ordinance — a set of minimum standards and requirements that are established by the U.S. Food and Drug Administration for regulating the production, processing and packaging of Grade A milk — allows milk tanker trucks to be used repeatedly for 24 hours before mandatory cleaning, but specifications aren’t made for the length of time a tanker can be empty between loads.

OSU researchers have been studying raw milk quality and the commercial milk supply chain for several years. In 2015, they published the results of a study that showed that sanitation practices and policies for long-distance milk hauling, known as “clean-in-place,” mitigated any measurable effect on raw milk quality.

“These trucks go out up to 10 times each day and often sit empty between loads, and as soon as the raw milk is emptied air comes into the tank from the surroundings and the truck immediately begins warming up,” Goddik said. “We believed there would be a build-up of bacteria on the surface inside these trucks.”

All of the milk is safe, because it’s pasteurized. This study also showed that the current storage and cleaning practices are sufficient for ensuring quality. Pasteurization eliminates bacteria, but some enzymes that survive the pasteurization process affect milk quality.

“This can produce off-tasting milk, for example,” Waite-Cusic said.

The researchers conducted a pilot study using five-gallon milk cans to replicate a “worst-case hauling scenario” – they were left empty and dirty for extended periods between loads, especially in warm weather. They collected and tested milk samples to measure the level of bacteria linked to raw milk quality. The results of the pilot showed that extended idle time intervals could contribute to compromised raw milk quality.

The study’s focus was to investigate if the high-quality raw milk in the second load was contaminated following pick-up by the uncleaned tanker. Kuhn collected milk samples from each farm’s bulk tank and from the tanker before unloading. Those samples in the commercial study showed that extended idle times of six hours or less – the industry standard across the United States – didn’t measurably compromise milk quality.

Based on their findings, the team of Kuhn, Goddik and Waite-Cusic also published a second study in the Journal of Dairy Science focused on overall industry milk-hauling sanitation practices in the western United States that found, among other things, that manual cleaning procedures appear to be a major weakness in hauling practices.

“Automated cleaning procedures work, but every time there is a human involved, things don’t always go as they should,” Goddik said. “We observed that some workers don’t clean as well as others. That needs more attention.” 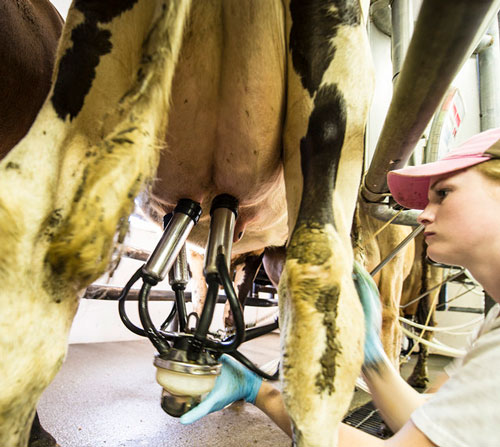