CORVALLIS, Ore. – Jumping worms, a not-so-nice pest that arrived in the United States in the 1920s as fishing bait and as hitchhikers on imported plants and soils, have vaulted into gardens and nurseries up and down the Willamette Valley corridor.

Unlike beneficial earthworms and nightcrawlers that burrow deep tunnels in the soil, aerating and releasing nutrients as they go, jumping worms stay in the debris on top and eat two to three times the amount of leaf litter as the other worms, according to Sam Chan, Oregon State University Sea Grant Extension watershed health and aquatic invasive species specialist.

Jumping worms, which are native to many parts of Asia, are easily identified by their violent thrashing, slithering and actual jumping in the air. They are smooth, glossy gray or brown and 1.5 to 8 inches long. A clear indication is the clitellum (band), which is milky white to gray-colored, smooth and completely encircles the body of the worm. In contrast, the clitellum of common earthworms is raised rather than smooth and does not wrap entirely around the worm.

Because they have very large mouths akin to mechanical excavators, jumping worms are able to grasp and consume large amounts. With their voracious appetite, they outcompete the native microbial organisms and invertebrates that other organisms feed on. Their propensity to eat all the litter creates bare soil where invasive plants and animals move in, altering native ecosystems. They also remove the mulch that helps cool the soil and conserve moisture,

Further, the castings – or fecal material – of most worms contain extremely important microbes that help fight soil-borne plant diseases and repel insects. Worm castings also improve soil structure by diversifying the size of soil particles, which enhances moisture penetration and increases water retention. With jumping worms, the outcome is the opposite. Since their gut biome is slightly different, there aren’t the same beneficial results.

“What they are casting out doesn’t absorb moisture well so you end up losing porosity, which affects the overall structure of the soil,” Chan said. “Initially wet and gummy, the castings quickly dry into hard granules that are difficult to rewet, not the best medium for growing plants.”

The changes to soil structure and composition caused by the worm castings can attract certain unwanted microbes, which creates an increased susceptibility to disease and can cause girdled roots. Plant stems and roots at the surface of the soil may become exposed to more environmental extremes from the loss of litter and decomposed organic matter and changes to soil structure.

It’s difficult to put numbers to the amount of jumping worms in Oregon, Chan said. The first – an Amynthas gracilis – was found in 2016 in Grants Pass, where it was passed along through compost. Another species – Amynthas agrestis – has landed in at least six counties, from Pendleton in the east and to the I-5 corridor down to Roseburg, all on major transportation routes. Most likely they arrived as tiny cocoons in plants, soil, mulch and tire treads from the East Coast, where they do extensive damage to forests. Gardens suffer, too.

Since they are both female and male, jumping worms have no trouble reproducing. They burrow into the soil and lay tiny cocoons with two or three embryos inside. The cocoons hatch in spring, begin feeding, grow rapidly into adults and die in winter after laying more cocoons. The next spring, it starts over again.

Jumping worms have been outlawed in many states, but not all, and can still be found online for fishing. Chan advises to be careful not to purchase jumping worms, also known as crazy worm, Asian jumping worm and snake worm, and to spread the word about their danger. Many people – even those who sell them – aren’t aware of their invasiveness.

“Jumping worms are probably here to stay,” Chan said. “We want to minimize their spread. You won’t want them to get established in your garden. I sure don’t want them in my garden. Escaped worms, releasing leftover bait worms and unknowingly spreading them through plant materials and soils can have serious negative impacts to native and planted landscapes.”

To help decrease the spread of jumping worms, shake off the roots of plants when sharing or buying at a private plant sale. Buy bareroot plants when possible. Never share compost, mulch, soil or plants that contain a known infestation.

Nurseries are being careful, but it’s still a good practice to inspect the soil for cocoons when you transplant. If you find jumping worms in your garden, they will probably be in pockets rather than the whole garden. Brush off your shoes and equipment when you move from place to place in an effort to keep them from spreading. If they are in contained spaces, you can spread plastic to heat the soil. Once it reaches 104 degrees F, the cocoons die.

If you find jumping worms, report it to the Oregon Invasive Species Council’s hotline 866-INVADER (268-9219) or online.

For more information, see this publication on jumping worm identification and resources and this article on how to avoid spreading invasive species in plant sales or swaps. A video shows the jumping worm’s large mouth. 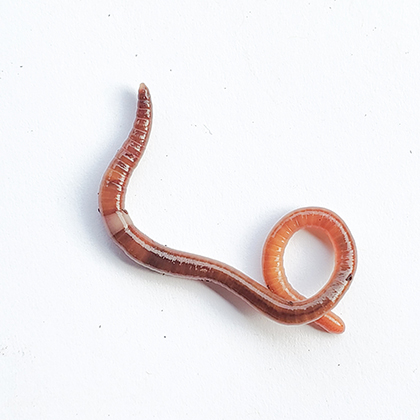