CORVALLIS, Ore. – A new study shows that Atlantic salmon use the Earth’s magnetic field as a navigational tool – much like their cousins, Pacific salmon – and don’t lose that ability through several generations of fish even after they have been transplanted into a land-locked lake.

The findings suggest that Atlantic salmon, which are widely used in aquaculture, may have greater potential to navigate and thus invade novel habitats if they escape their pens, researchers say.

Results of the study are being published today in the Proceedings of the National Academy of Sciences.

This is the first time in which scientists have documented that another genus of salmon use the magnetic field as a map for navigation. A landmark 2014 study by Oregon State University researchers showed that Chinook salmon use the magnetic field to orient themselves as they migrate over hundreds, even thousands of miles through the Pacific Ocean to target their oceanic foraging grounds.

Atlantic salmon had first been brought to the land-locked lake from Maine some 60 years ago, and the researchers were curious to see if they had navigational abilities similar to ocean-going salmon, according to lead author Michelle Scanlan, faculty research assistant in OSU’s College of Agricultural Sciences and lead author on the PNAS article.

“We wanted to see how Atlantic salmon would respond if we put them into different magnetic fields at the boundaries of Pacific salmon oceanic range,” Scanlan said. “If we put them into an extreme northern field, would they ‘course-correct’ and align themselves in a southerly direction, and vice-versa? And the answer was yes. They clearly aligned themselves in the tank to adjust to an appropriate magnetic field signal.”

This ability to use the magnetic field to navigate by land-locked Atlantic salmon is of particular concern because of an incident in August of 2017, when 200,000 to 300,000 Atlantic salmon escaped an aquaculture pen in Washington’s Puget Sound. Eight months later, one of the fish was reportedly caught 40 miles up the Skagit River, raising concerns about the impact on native salmon and the ecosystem.

The state of Washington has since banned Atlantic salmon farms.

The study also raises some interesting questions about how long fish in general, and salmon in particular, retain skills they no longer need, said Nathan Putman, a senior scientist with LGL Ecological Research Associates in Bryan, Texas, who led the 2014 Pacific salmon navigation study as a post-doctoral scholar at OSU. He also is a co-author on the PNAS paper.

“Why didn’t the Hosmer Lake fish lose their ability to navigate?” Putman said. “It apparently isn’t a ‘use it or lose it’ skill. It may be possible that they have some finer-scale navigation tools at their disposal to use in a lake. Even at small-scales, fish are confronted by a variety of spatial tasks that might benefit from use of magnetic cues - from traveling in a straight line to maneuvering through the water column. More research is needed to answer those questions.”

A study by the same researchers published in February in Biology Letters found that larval salmon use the magnetic field when emerging from “redds” or nests and into the water column – suggesting salmon do have some fine-scale magnetic tools that may not have been fully identified.

On a broad scale, however, the use of the magnetic field explains, in part, how salmon can find the way to their river of origin.

“The magnetic field is kind of like having a GPS system in your car,” said Amanda Pollock, a graduate student in OSU’s Department of Fisheries and Wildlife and co-author on the study. “That gets them close to their river and then their olfactory senses kick in.”

And that ability is retained even throughout many generations of landlocked individuals.

The senior scientist for the project is David Noakes, professor in the OSU Department of Fisheries and Wildlife. 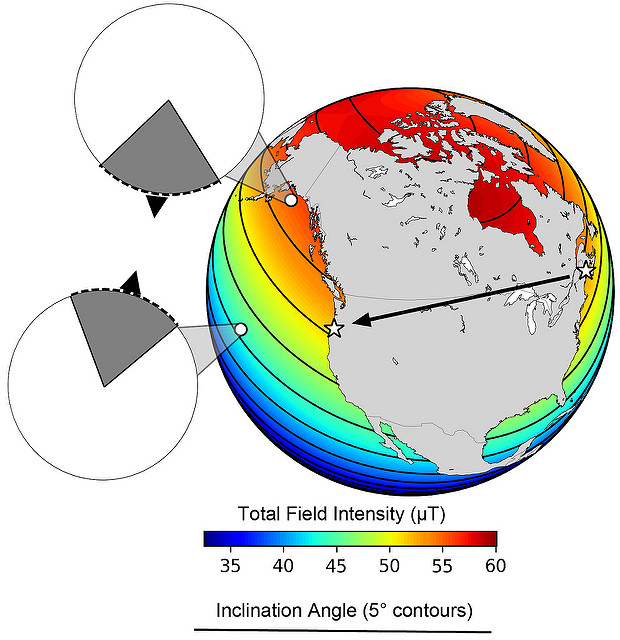