NEWPORT, Ore. – Scientists have identified off the coast of Ecuador a distinct population of oceanic manta rays that is more than 10 times larger than any other known subpopulation of the species.

The findings, just reported in the journal Marine Ecology Progress Series, indicate that while other populations of oceanic manta rays are typically small and vulnerable to human impacts, this population is large and potentially quite healthy, said Joshua Stewart, an assistant professor with the Marine Mammal Institute in OSU’s College of Agricultural Sciences and a co-author of the paper.

“It’s clear that something different is happening here,” Stewart said. “This is a rare story of ocean optimism. In other regions, we typically have population estimates of 1,000 to 2,000 animals, which makes this species very vulnerable. In this area, we’ve estimated that the population is more than 22,000 mantas, which is unprecedented.”

Oceanic manta rays are the largest species of ray, with wingspans that can reach more than 20 feet. They are filter feeders that eat large quantities of krill and other zooplankton and tend to live in small subpopulations in tropical, subtropical and temperate waters, spending much of their time in the open ocean.

Oceanic manta rays were listed as threatened under the U.S. Endangered Species Act in 2018, and in 2019 their threat category increased from vulnerable to endangered on the International Union for the Conservation of Nature’s Red List. The biggest threat to oceanic manta rays is commercial fishing, both as the target of some fisheries and as unintentional bycatch in many others.

The new study was led by Proyecto Mantas Ecuador of Fundación Megafauna Marina del Ecuador, a conservation organization based in Ecuador, in collaboration with The Manta Trust, the Marine Megafauna Foundation and the Ocean Ecology Lab at OSU’s Marine Mammal Institute, which is led by Stewart.

Oceanic manta rays are a challenging species to study in part because they tend to spend their time in offshore locations that are hard for researchers to access, and their visitation patterns can be unpredictable.

But in the late 1990s, researchers from Proyecto Mantas Ecuador discovered that a population of oceanic manta rays aggregate in August and September each year around Isla de la Plata off the coast of Ecuador, where they are relatively easy to locate and study. It is also a popular diving area, and visitors take numerous photographs of the animals, providing researchers with a trove of data.

“Many of the photos used in our study were contributed by recreational divers who became citizen scientists when they snapped photos of manta rays,” said the study’s lead author, Kanina Harty of The Manta Trust. “We get a huge amount of information about each animal just from these photographs.”

Each manta ray has a unique spot pattern on its belly, similar to a human fingerprint, which allows researchers to identify individual animals and track their movements and locations over time. Photos of individual rays can also be used to document injuries, evidence of mating and maturity.

The researchers used data collected through their own observations and from recreational SCUBA diver photos between 2005 and 2018 to identify more than 2,800 individual rays and estimate a total population of more than 22,000.

“That is significantly larger than what we’ve seen in oceanic manta ray populations elsewhere,” said Guy, Stevens, chief executive and founder of The Manta Trust. “This is by far the largest population that we know of.”

The researchers’ findings suggest that conditions in the region are particularly favorable for a large, healthy manta ray population, Stewart said. The rays tend to straddle the region around the border of southern Ecuador and Peru, though a handful were found to have traveled as far as the Galapagos Islands.

“This work solidifies Isla de la Plata, and Ecuador more broadly, as a globally important hot spot for this endangered species,” said Michel Guerrero of Proyecto Mantas Ecuador, which is a Fundación Megafauna Marina del Ecuador project. “While this population may be healthy thanks in part to its large size, it is essential that we take the necessary steps to protect and prevent the declines that many other manta ray populations have faced.”

Manta rays are likely drawn to the area due to availability of food, the researchers said. The ocean off the coast of Ecuador and Peru is one of the most productive in the world, due to cold, nutrient-rich water rising to the surface in a process called upwelling.

“It seems that this productive upwelling region is able to support huge populations of even very large animals,” Stewart said.

Capturing manta rays in fisheries has been illegal in Ecuador since 2010, and since 2016 in neighboring Peru, but the species likely still faces threats from fishing activity, including line entanglement, vessel strikes and bycatch, Guerrero said. There were 563 manta rays identified in the study with visible injuries or scars, and more than half of those were either entangled in fishing gear or showed evidence of previous fishing line scarring.

Continued monitoring of the population is needed to understand how human activity and climate change may affect food availability, distribution and overall population health, Stewart said.

“While there is good news about this population, it is a cautionary tale,” he said. “Manta rays appear to be sensitive to environmental disruptions such as changes to ocean temperatures and food availability. They will likely be impacted by a warming climate if upwelling strength and the abundance of food changes alongside ocean temperatures.”

Additional co-authors of the study are Anna Knochel of the Fundacion Megafauna Marina del Ecuador and Andrea Marshall and Katherine Burgess of the Marine Megafauna Foundation. 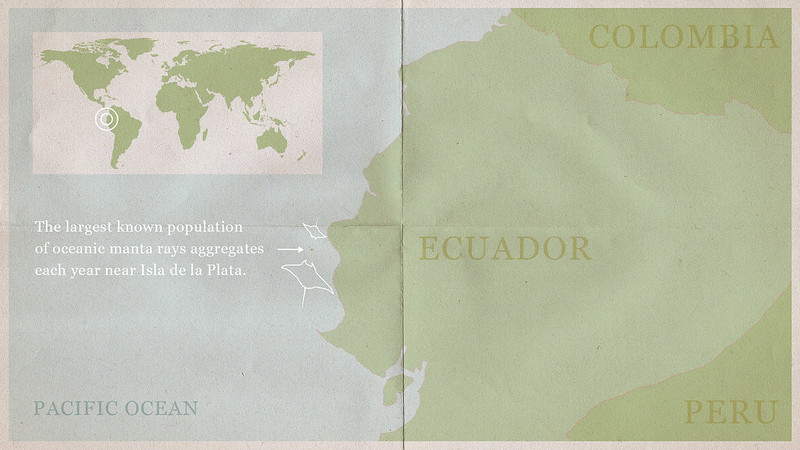 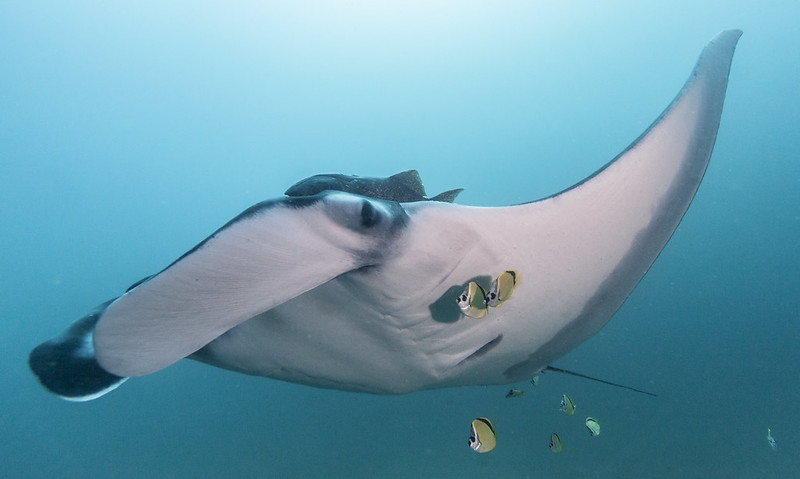 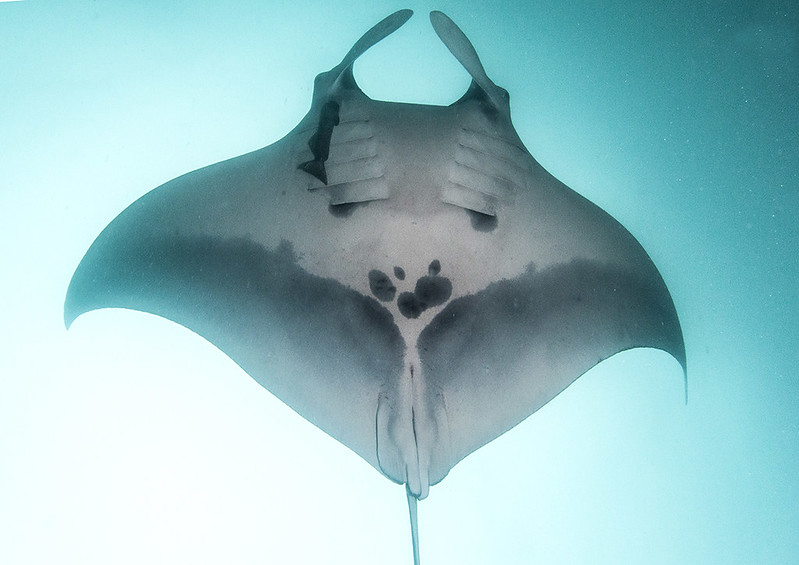 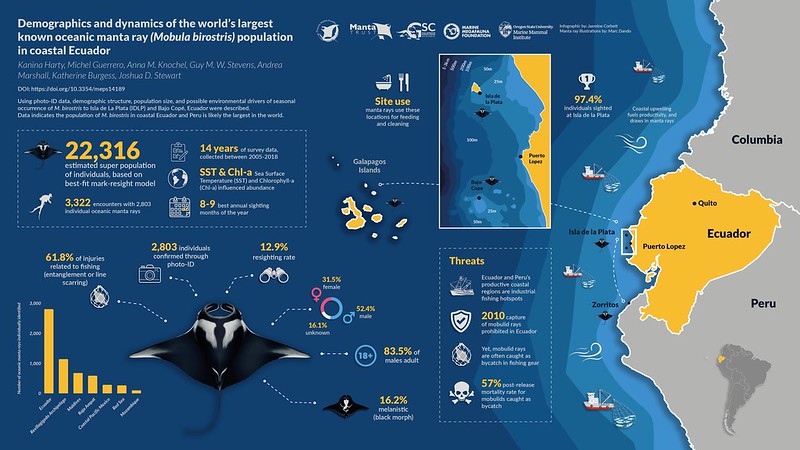