Learn how to prune berries, kiwifruit and grapes in online classes

CORVALLIS, Ore. – When homeowners set out to prune grapes, kiwifruit and other berry crops, they often stand in front of the plant at a complete loss. Just getting started is intimidating.

“Over my many years at OSU, pruning has been the single most common question and challenge for home gardeners,” said Bernadine Strik, professor and Oregon State University Extension berry specialist. “When I introduced videos into my presentations recently, the reaction was extremely positive.”

That response compelled her to develop a series of online courses on pruning blueberries, raspberries, blackberries, grapes and kiwifruit. Taught by Strik, the new courses have four to eight narrated lectures with ample photos and videos. They range in length from 1¼ to 2½ hours, depending on the crop.

The series is offered as self-paced, on-demand modules available anytime online. Registration is available for single modules at $50 or for multiple modules at a discounted price. The fee covers unlimited access for a year.

To get your juices flowing, Strik offers some tips for each of the plants included in the series:

If you don’t prune, you’ll get fruit on young plants but then they die or don’t get to full size. “You pay the price if all you care about is fruit in the first few years and don’t prune,” Strik said. “When you have a plant that gets 6 feet tall and lives 50 years, you have to be patient and prune sufficiently so bushes can grow as well as produce some fruit during the immature years. When mature, prune for a balance of fruit and growth.”

Blueberries need acidic soil (pH 4.5 to 5.5) to grow well. If the pH is higher, lower it to 5.5 by adding elemental sulfur. Check Growing Berries on the Oregon Coast: Blueberries for amounts to apply. Follow the recommended guidelines on fertilization. Only apply products with the ammonium form of nitrogen; many common fertilizers have only nitrate nitrogen so check the label or ask employees for ammonium nitrogen products.

Pruning is extremely important in grapes or you’ll end up with poor fruit set or scraggly clusters and later-than-normal ripening. You need to remove about 90% of canes (last year’s growth) each winter when pruning. There are two options for pruning grapes: cane and spur pruning. Which you use depends on the type of grape. Find that information in Growing Table Grapes or the grape pruning module. With cane pruning, leave two to four long canes, depending on the training system you choose. Remove the rest. The number of buds to leave depends on vine age; about 30 buds per plant is common. Most of these buds will produce a shoot with flower clusters in the upcoming season. With spur pruning, short 1-year-old cane sections are left rather than long canes. Prune each spur back to three to five buds. Remove the rest.

You’ll need two vines – a male and a female – for pollination and to get fruit on the female vine. The female is pruned in winter; the male after bloom in June. Plants are extremely vigorous and more than 90% of last year’s growth is removed when pruning. They are pruned similarly to grapes.

Try kiwiberries, small pop-in-your mouth fruit that you can eat skin and all. They have a more tropical flavor and will vine ripen unlike the familiar large, fuzzy fruit found in grocery stores.

Everbearing raspberries produce fruit the first year when planted. The new primocanes will start flowering in June and will produce fruit from the tip down. How much of the primocane fruits is dependent on the variety and climate. The part of the primocane that fruited will die in winter. To produce two crops a year, prune the dead tips in winter. These canes will produce fruit in early summer as floricanes. The late crop will be produced on the tips of the new primocanes. If you only want to grow these for a late summer crop, cut all canes back to ground level in late winter. All of your fruit will come from the new primocanes. This is a typical pruning method for home gardeners who also grow summer-bearers for a large crop in June-July.

Summer-bearing raspberries produce their entire crop on floricanes. Only primocanes grow the first year of planting. In the second year, the floricanes will fruit in early summer. When the cane is done producing fruit, it dies; you can prune these out at their base in August or winter. At the same time, new primocanes, which will produce next year’s crop, begin to grow. It’s important to prune and train these primocanes in winter so you get a good crop the next season.

Many people don’t realize Marion and Boysen are blackberries. They are called trailing blackberries because primocanes are not self-supporting and trail along the ground. They produce fruit only on floricanes in early summer. After fruiting, these floricanes die and should be pruned back to their base in mid-August. New primocanes should be trained on trellis wires at the same time. Look for the new thornless Columbia Star from the collaborative U.S. Department of Agriculture and OSU breeding program. It produces outstanding fruit, Strik said. 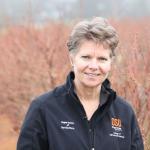