CORVALLIS, Ore. – Researchers from Oregon State University say ecological data gathered during a recent low-flow experiment in the Grand Canyon is a key step toward understanding Colorado River ecosystems as the amount of water in the river continues to decline.

Dave Lytle, professor of integrative biology, and Ph.D. students Angelika Kurthen and Jared Freedman teamed with scientists from the United States Geological Survey during the March 2021 project to examine the quantity and diversity of invertebrates in the river. Monitoring aquatic invertebrates is an important tool for keeping track of stream health.

“The Colorado River and its dams are important to cities throughout the Southwest, and as a result of that management the river experiences some pretty unusual flows,” Lytle said. “During the day in the Grand Canyon, river levels can rise several feet, then they can drop down several feet, stranding your boat if you’re not careful. That’s because there’s high electricity demand during the day and lower demand at night.”

The high flow during times of heavy demand for power is known as hydropeaking.

“Hydropeaking can cause trouble for ecosystems downstream, and with our collaborators we’re experimenting with ways to change river flows to make them more compatible with productive ecosystems,” Lytle said. “Invertebrates are food for fish, birds and bats, and we want to enhance that food base by testing out different flow regimes that mesh with management ideas.”

During the low-flow event, releases from Lake Powell through the Glen Canyon Dam were restricted so that the Colorado ran at 4,000 cubic feet per second compared to its usual flow of 8,000 to 15,000 CFS. Lytle’s team took samples to measure the quantity of invertebrates stranded by the low flows and environmental DNA samples to analyze the diversity of invertebrates in the water.

“During this spring’s low flow, gravel bars and parts of channels that had been submerged were exposed for the first time in decades,” Lytle said. “We saw really large areas of vegetation and invasive species like New Zealand mud snails and quagga mussels, which are there in high numbers at the expense of native invertebrates such as black flies, mayflies and midges that are better food sources for native fish.”

The Colorado River follows a 1,450-mile route generally southwest from north central Colorado to just east of Las Vegas. From there it turns south to form Arizona’s western border with Nevada and California, and then the border between Mexican states Sonora and Baja California before emptying into the Gulf of California.

Between the U.S. and Mexico, 40 million people depend on water from the Colorado. The snowmelt-fed river has seen its flows drop by 20% over the last 100 years as runoff efficiency – the percentage of precipitation that ends up in the river – has declined as summers have become hotter and drier, cooking the soil.

This year, for example, snowpack is 80% of average but sending just 30% of the average amount of water into the Colorado. Lake Mead, the reservoir behind Hoover Dam, is at an all-time low, and between them Lake Mead and Lake Powell, behind Glen Canyon Dam, are projected to be just 29% full within two years.

Completed in 1966, Glen Canyon Dam is 710 feet high and 1,560 feet long and named for the series of deep sandstone gorges flooded by Lake Powell. The lake draws its name from John Wesley Powell, the leader of the first boat expedition to traverse the Grand Canyon.

“Typically the Colorado River is coming out of Lake Powell fast and cold, which is a hostile environment for desert adapted organisms,” Lytle said.

For the recent experiment, low flow was maintained from March 15 through March 20, and immediately after that there was a big release of water, known as a high-pulse flow event, intended to scour out areas and possibly create new habitat for native fish and their food sources.

“During the first part of the low flow, we were in the far upper reaches of the canyon, and as soon as we finished sampling, we packed up the truck and raced across the desert 200 river miles away to Diamond Creek, where you can access the Grand Canyon from a road, just in time to capture the low-flow event moving its way down a long, sinuous canyon,” Lytle said. “And a USGS team was taking samples by boat throughout the entire canyon, complementary to what our group was doing. It was a real team effort, with people measuring riparian vegetation, taking drift samples of invertebrates in water, checking respiration of aquatic plants, and also noting the effect on fish and fisheries.”

As the climate continues to warm and the amount of water available for humans continues to drop, low flows such as the one during this year’s experiment may become the new normal, he added.

“That presents challenges but also opportunities for research,” Lytle said. “Prior to there being any dams on the river, low-flow events were part of the normal annual cycle of flows. In the spring, the river could flood quite spectacularly in some years, and by late summer or early fall into winter, flows could get to 4,000 CFS or even lower than that.”

Lytle says that kind of variation amounts to “exercise” for the river, which needs it for health just like a person needs both activity and rest.

“One question we’re asking is whether there could be ecological benefits, at least at certain important times of year, to low flows,” he said. “Low flows allow the water temperature to increase and let more light to reach the benthic zone, where the productivity of algae and invertebrates occurs. It also might favor greater production of those important native black flies, mayflies and midges.”

Documenting the work in March was photographer Jeremy Monroe of Freshwaters Illustrated, a nonprofit educational media organization headquartered in Corvallis. 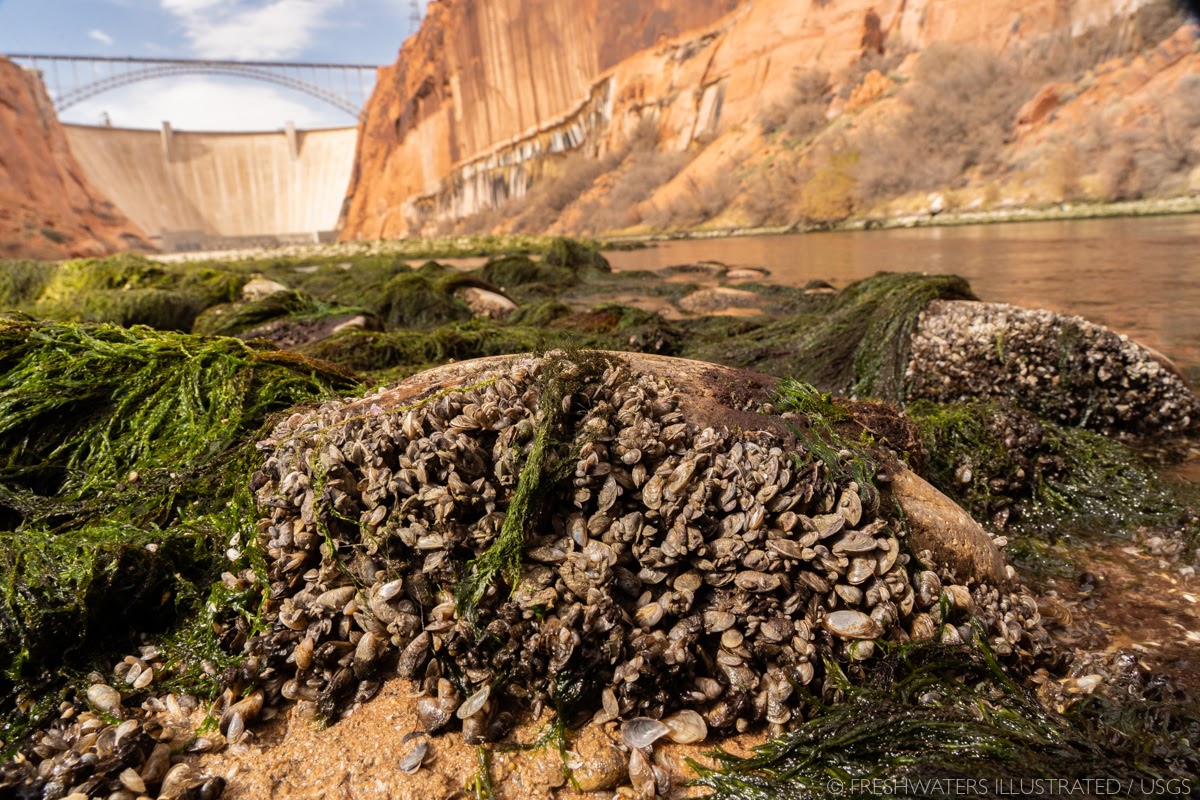 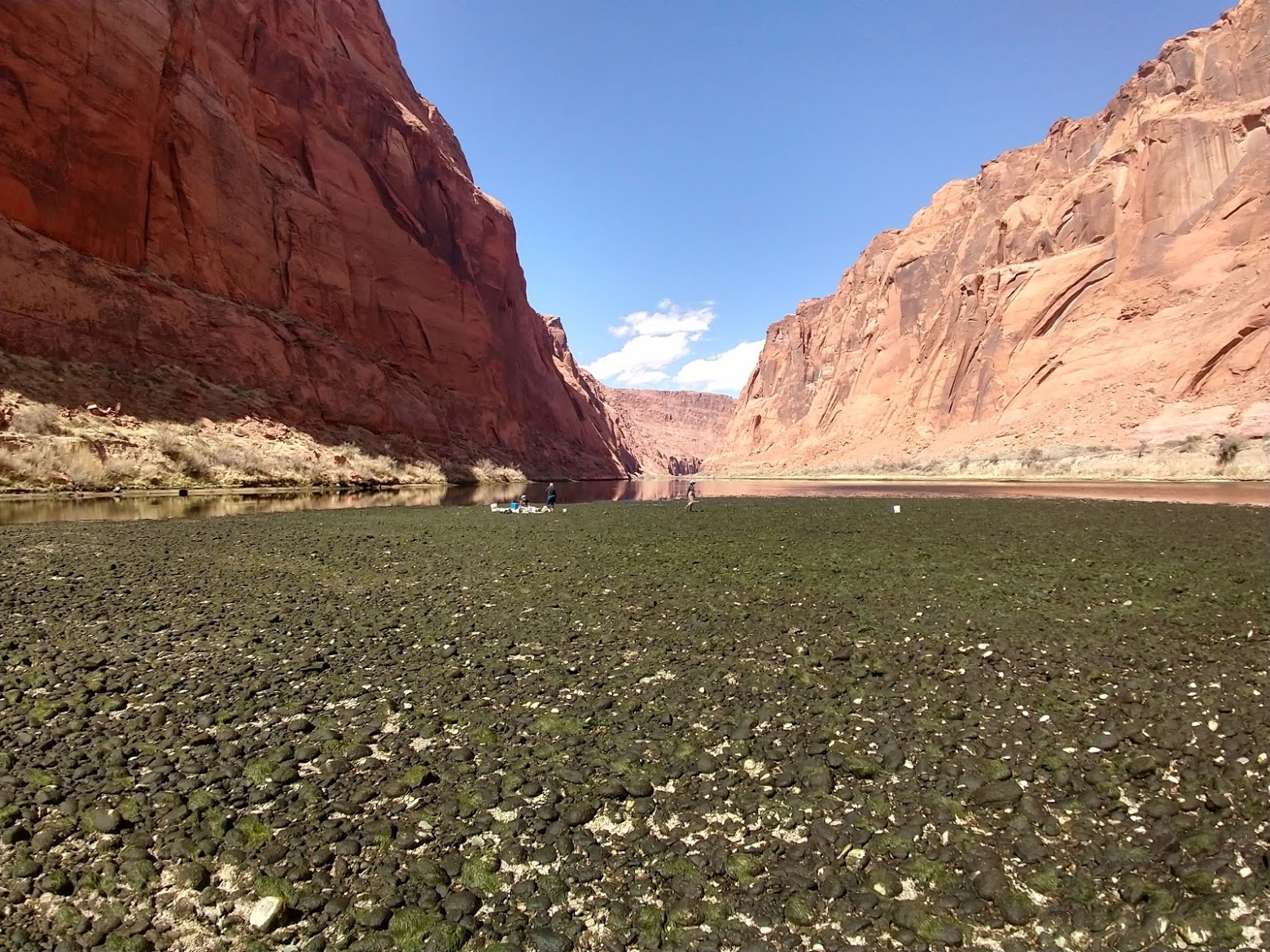