CORVALLIS, Ore. — Oregon State University researchers have conducted the largest study of water births to date and found they were associated with better overall outcomes than non-water births.

Water births had a lower risk of several maternal and neonatal outcomes, including postpartum hemorrhage and hospitalization soon after delivery, and no increase in neonatal death.

The study, published in the British Journal of Obstetrics and Gynecology, focused narrowly on healthy, low-risk pregnancies, without complications such as gestational diabetes, multiple births or breech position that would necessitate hospital-level intervention.

“People like to labor in the water because it helps with pain management. The issue now is that a few hospitals offer water immersion for labor, but then once you start pushing to deliver the baby, you have to get out of the tub,” said Marit Bovbjerg, lead author on the paper and an assistant professor of epidemiology in OSU’s College of Public Health and Human Sciences. “This study is trying to address whether you really do have to get out, or whether babies can be born underwater.”

People generally want to stay in the water once they’ve started the birthing process there, said co-author Melissa Cheyney, a professor of anthropology in OSU’s College of Liberal Arts.

“Most people really want the continued pain relief that warm water immersion can offer during the pushing stage. And as you can imagine, few welcome having to get out of the tub at that moment,” Cheyney said. “The alternative for pain management is epidural anesthesia, and that is not without risk.”

Water birth is offered in some hospitals in the U.S. but is much rarer here than in most developed countries around the world. To get a large enough sample size for the study, the researchers turned to community births, which take place in a person’s home or in a birth center. Only 1.5% of people in the U.S. give birth outside of a hospital, and about half of these elect to have a water birth.

“What we found here is that water birth can be totally safe in these home and birth center settings. So surely you can also pull this off in a hospital, where many more resources are available,” Bovbjerg said.

Bovbjerg, Cheyney and co-author Aaron Caughey from Oregon Health & Science University compared 35,060 pregnancies from all 50 states: 17,530 water births and 17,530 non-water births. A unique aspect of the OSU study was that they were able to match pregnancies within the two groups on more than 80 covariables, such as age, education level and pregnancy characteristics. This propensity score method ensured a direct comparison between the two groups.

“To put that in perspective, the only other study that’s tried to do this matched on only four covariables,” Cheyney said. “Since we matched on more than 80, we feel confident that the two groups we’re comparing are very similar except for where they gave birth: on land or in water.”

Furthermore, water births were associated with lower risks for several other maternal outcomes, including 64 fewer hemorrhages per 10,000 births, and 28 fewer hospitalizations in the first six weeks.

Water births were associated with 20 additional umbilical cord avulsions per 10,000 births. Avulsions occur when the umbilical cord snaps before it can be tied off and can cause hemorrhages. However, there were no infant deaths from cord avulsions and no difference in overall death rates between the two groups. There were 26 fewer infant hospitalizations per 10,000 water births, suggesting that the midwives attending these births successfully managed cases of avulsion.

“We try to be really careful in the paper to say, ‘This isn’t for everybody,’” Bovbjerg said. “But for some people, this could be a totally viable option.” 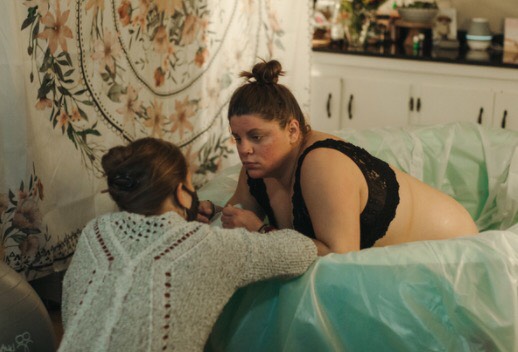