CORVALLIS, Ore. – Research by the Oregon State University College of Engineering has led to a promising potential therapy for neonatal jaundice that’s more safe, simple and convenient than the blood transfusions currently given to babies suffering from the most dangerous forms of the condition.

The study led by Adam Higgins, associate professor of bioengineering, suggests microfluidics and high-intensity light can correct a dangerous bloodstream buildup of bilirubin. Bilirubin is the pigment that’s responsible for the yellow skin color associated with jaundice and, at high enough levels, puts the afflicted infant at risk of sometimes irreversible neurological damage or even death.

Findings were published in Biomicrofluidics.

Neonatal jaundice is a common condition among newborns, whose bodies are busy breaking down the red blood cells used in the uterus and making new ones as the infant transitions to breathing ambient air once outside the womb.

Blood’s red color stems from a protein called hemoglobin that carries oxygen, and as those red blood cells are broken down, the liver modifies hemoglobin into bilirubin. When an infant’s immature liver can’t keep up with all of the bilirubin it’s producing, the pigment leaks into the bloodstream before settling in the skin, causing a yellowish appearance.

About two-thirds of all newborns experience some level of jaundice, typically a mild case. Much of the time it clears up on its own or with minimal treatment, such as getting more water into the infant’s body.

Other cases, with higher levels of bilirubin in the blood, can require whole body phototherapy – using light to trigger chemical reactions that result in compounds more easily excreted than bilirubin. And in the most severe cases, rare in the United States but occurring in one birth in a 100 in much of the world, infants need all of their blood replaced by donor blood, twice, in what’s known as a double-exchange transfusion – a complicated, labor-intensive and relatively risky procedure.

The Oregon State research aims to provide a simpler and safer alternative: treating the patient’s blood by circulating it through an external device known as a microfluidic photoreactor.

Microfluidics is the study of how fluids behave as they travel through or are confined in microminiaturized devices equipped with channels and chambers. Surface forces as opposed to volumetric forces dominate fluids at the microscale, meaning fluids act much differently there than what is observed in everyday life.

Using human blood in a laboratory setting and also using a rat model, Higgins and collaborators at the College of Engineering, Oregon Health & Science University and the University of Washington studied the effect of LED light on extremely bilirubin-rich blood pumped through microfluidic photoreactors. The light-catalyzed reaction they looked at is the same as the one enabled by whole-body phototherapy, but the bilirubin in the blood is targeted directly, making for greater efficiency.

“The findings demonstrate that high-intensity light at a wavelength of 470 nanometers can be used to quickly reduce bilirubin levels without causing any appreciable damage to the blood cells’ DNA,” Higgins said. “Our work with Gunn rats showed that photoreactor treatment for four hours significantly pared down bilirubin levels – similar to the kind of bilirubin reduction seen in exchange transfusion and on a similar time scale. The mathematical model we developed suggests this new treatment approach that we tested at lab scale will perform better than exchange transfusion at the clinical scale, and it requires no donor blood.”

Next steps, Higgins said, involve scaling up the device used with the Gunn rats so it will work on newborn humans, who are roughly 10 times larger, and measuring blood DNA damage in a preclinical animal model, such as the rhesus monkey, that can more closely replicate human neonatal jaundice.

“But overall, it looks like further development of the photoreactor technology can potentially bring a promising new approach for treating extremely high levels of bilirubin in newborns’ blood,” he said.

Working with Higgins were John Lahmann, Ryan Faase, Hsuan Yu Leu, Kate Schilke and Joe Baio of the College of Engineering, Steve Jacques of the University of Washington and Brian Scottoline of Oregon Health & Science University. 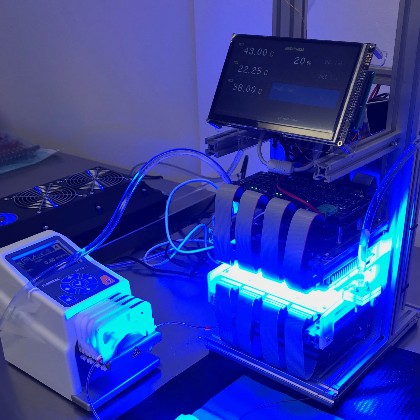