The small mammals take gardeners to their knees to peer down tunnels, set traps and toss in everything from kitty litter to gum. They wage war against the critters before they know what they’re fighting, which can lead to frustration.

“How you deal with them depends on what you have,” said Dana Sanchez, a wildlife specialist for Oregon State University’s Extension Service. “The traps are different and so are the baits you would use.”

Moles, voles and gophers all create tunnels and are active underground, but what they eat and the damage they cause varies. They all improve the soil by aerating it and mixing nutrients, but sometimes their habits get them in trouble with gardeners.

Gophers favor bulbs and roots. Voles go for grass, but also gnaw on shrubs and stems nearest their holes and runways. Moles, which are rarely if ever seen, prefer non-plant food.

“People say moles are eating my garden, but moles are adapted for swimming through the soil to hunt prey,” Sanchez explained. “They just tunnel through looking for worms, grubs and insects.”

Mole tunnels can cause damage to plants, though, when their runways create paths around roots. And the mounds of dirt drive homeowners crazy and interfere with mowing.

Gophers – about the size of ground squirrels -- will eat whole plants.

“If you see a plant disappear,” Sanchez said, “it’s a gopher. They’re famous for pulling things below ground.”

Though voles live in little tunnels, they spend time above ground eating grass and nibbling on other plants. The mouse-size voles leave a lot of small holes and connecting runways through the damaged grass they’ve been dining on.

You can tell you have a mole if the mounds in your yard or garden take on a volcanic, rounded shape. Gopher mounds, on the other hand, are flatter on top, fan-shaped with the hole off to the side.

“The important part is for people to assess the level of damage with the level of control,” Sanchez said. “Is having a few holes in the lawn enough of a problem that you need to take action?”

For those who choose combat, stick to research-based controls, she advised. Gadgets and homemade recipes have not been shown scientifically to work.

One way to control voles is with mousetraps, which can be set at the entrance to their tunnels. But because of their high rate of reproduction, it can be difficult to control them, she said.

Scissor-jaw traps are recommended for moles, while two-pronged pincher traps are effective for gophers, according to Sanchez. In states other than Oregon, be sure to check regulations as laws on which – or whether -- traps are legal.

To figure out where to set traps, find an active tunnel by probing about six inches down near a fresh mound. You can also push down on mounds to close them and wait to see where a fresh one appears. Set traps in a tunnel near a fresh mound.

In raised beds, you can repel moles and gophers by using a barrier of welded wire on the bottom. Tilling in rows between crops may help. Using baits is an option, Sanchez said, but will be dangerous to pets and other animals. As with all pesticides, read the label carefully, she added.

Learn more about moles in the Extension guide Controlling Moles.

More information on voles and gophers is available in the publication Meadow Voles and Pocket Gophers: Management in Lawns, Gardens, and Croplands. 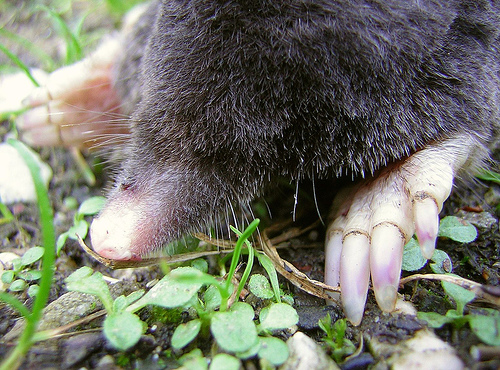