Multimedia art installation on Chernobyl on exhibit at Oregon State

CORVALLIS, Ore. – “View of the Red Forest,” a multimedia art installation on the dilapidation and rebirth of the Chernobyl Exclusion Zone, will be on display Jan. 7 through Jan. 31 in Fairbanks Hall on the Oregon State University Corvallis campus.

The installation, by artist Julia Oldham, consists of large prints of windows looking out of abandoned buildings onto lush landscapes, with video documentation of Oldham’s visit to the zone.

For the exhibit, Oldham has teamed up with Free Static, a Eugene-based improvisational sound duo, for a one-day performance art experience. Free Static will perform live in the installation space at 8 p.m. on Saturday, Jan. 12. The event is free and open to the public.

In April 1986, an explosion in Reactor 4 of the Chernobyl Nuclear Power Plant in the former Soviet Union precipitated the worst nuclear disaster in history. The explosion created an enormous dust cloud carrying deadly radioactive isotopes which spread across Europe, affecting much of Eastern Europe and Scandinavia. The most severe contamination, however, settled in what is now known as the Exclusion Zone, a 1,000-square-mile area in Ukraine surrounding the power plant.

The Red Forest is a four-square-mile wooded area that received some of the highest levels of radioactive contamination resulting from the explosion. After absorbing huge doses of radiation, all of the trees died and turned a rusty red color, from which the name of the area derives. In the clean-up effort, the forest was bulldozed and buried underground, and a new forest was planted to stabilize radioactive isotopes. The Red Forest is now green and beautiful but remains one of the most radioactive areas in the world.

Oldham is an artist specializing in video, animation, performance, photography and photo illustration, drawings and music. Her work has been screened or exhibited at MoMa PS1 in Long Island City, New York; the San Diego Art Institute; The Museum of Contemporary Art in Chicago; the Peabody Essex Museum in Salem, Massachusetts; Disjecta in Portland; and more. She has received funding from the Fund for Art and Dialogue, New York, the Oregon Arts Commission and the City of Chicago Department of Cultural Affairs.

The exhibit will be held in the Woodshop Projects, a rustic, basement art space in Fairbanks Hall, 220 SW 26th St., Corvallis. Hours are 10 a.m. to 3 p.m. Monday through Friday. The exhibit is free and open to the public and is presented by the School of Arts and Communication in the College of Liberal Arts. 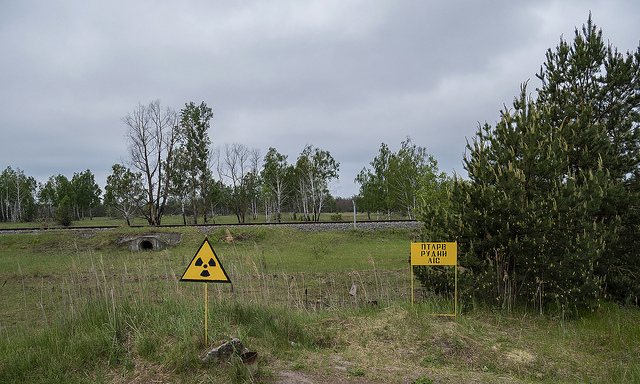