CORVALLIS, Ore. – Oregon State University research has identified the oldest known specimen of a fungus parasitizing an ant, and the fossil also represents a new fungal genus and species.

“It’s a mushroom growing out of a carpenter ant,” said OSU’s George Poinar Jr., an international expert in using plant and animal life forms preserved in amber to learn about the biology and ecology of the distant past.

A mushroom is the reproductive structure of many fungi, including the ones you find growing in your yard, and Poinar and a collaborator in France named their discovery Allocordyceps baltica. They found the new type of Ascomycota fungi in an ant preserved in 50-million-year-old amber from Europe’s Baltic region.

“Ants are hosts to a number of intriguing parasites, some of which modify the insects’ behavior to benefit the parasites’ development and dispersion,” said Poinar, who has a courtesy appointment in the OSU College of Science. “Ants of the tribe Camponotini, commonly known as carpenter ants, seem especially susceptible to fungal pathogens of the genus Ophiocordyceps, including one species that compels infected ants to bite into various erect plant parts just before they die.”

Doing so, he explains, puts the ants in a favorable position for allowing fungal spores to be released from cup-shaped ascomata – the fungi’s fruiting body –protruding from the ants’ head and neck. Carpenter ants usually make their nests in trees, rotting logs and stumps.

“We can see a large, orange, cup-shaped ascoma with developing perithecia – flask-shaped structures that let the spores out – emerging from the rectum of the ant,” Poinar said. “The vegetative part of the fungus is coming out of the abdomen and the base of the neck. We see freestanding fungal bodies also bearing what look like perithecia, and in addition we see what look like the sacs where spores develop. All of the stages, those attached to the ant and the freestanding ones, are of the same species.”

The fungus could not be placed in the known ant-infecting genus Ophiocordyceps because ascomata in those species usually come out the neck or head of an ant, Poinar said, and not the rectum.

“There is no doubt that Allocordyceps represents a fungal infection of a Camponotus ant,” he said. “This is the first fossil record of a member of the Hypocreales order emerging from the body of an ant. And as the earliest fossil record of fungal parasitism of ants, it can be used in future studies as a reference point regarding the origin of the fungus-ant association.”

Findings were published in Fungal Biology. 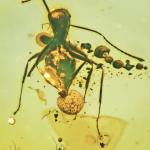 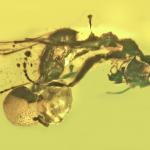 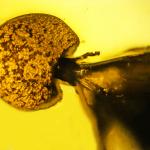