The discovery could represent an important advance in the prevention of surgical site infections, a multibillion-dollar challenge each year in the United States alone.

A collaboration that included Adrian Gombart of the Linus Pauling Institute at Oregon State University used coaxial electrospinning deposition and rolling to fabricate sutures that contained 25-hydroxyvitamin D3 and the pam3CSK4 peptide.

A peptide is a compound consisting of two or more amino acids linked in a chain; pam3CSK4’s function is to activate a cell’s toll-like receptor, which in turn triggers immune responses, in which vitamin D plays a key role.

The research showed the sutures released 25D3 – the same form of the vitamin that’s measured in the blood when a patient’s vitamin D levels are tested – on a sustained basis over four weeks. The sutures released pam3CSK4 via an initial burst followed by a four-week prolonged release.

“When the toll-like receptor is activated, you induce a particular enzyme to convert 25D3 to its bioactive form, known as 1,25-dihydroxy vitamin D3, that activates the vitamin D receptor,” Gombart said. “When activity increases, that increases expression of vitamin D receptor target genes, one of which produces the LL-37 peptide, which kills microbes by disrupting their membranes.

“The idea is, if you were to have an infection, the sutures would activate the toll-like receptors and start increasing production of 1,25D3 from the 25D3 that’s being released from sutures – so you get both local induction and an increase in the production of the antimicrobial peptide.”

The study’s corresponding author, Jingwei Xie of the University of Nebraska Medical Center, notes that the anti-infective sutures currently in use contain triclosan, an antibacterial and antifungal agent also found in a variety of consumer products.

“However, the frequent use has resulted in bacterial resistance,” Xie said. “Triclosan also shows a wide range of health risks including endocrine disruption, impaired muscle function, liver damage and the development of cancerous tumors. Compared to the currently available products and treatment options, the anti-infective sutures we develop could circumvent the selection for multidrug resistance and other health-associated shortcomings. The new sutures are also highly configurable and can deliver a variety of bioactive compounds to minimize infection risk, optimize healing and minimize scarring. None of the currently available sutures has this level of function.”

Gombart adds that the vitamin D delivered by the sutures could also affect additional genes involved in the immune response as well as LL-37.

“So a compound like vitamin D not only targets bacteria via the antimicrobial peptide, but other immune responses can also be modulated to help combat infection,” he said. “Targeting on multiple fronts helps minimize the chance of resistance.”

The University of Nebraska Medical Center, the National Institutes of Health, and the Otis Glebe Medical Research Foundation supported this research.

Also involved in the collaboration were researchers from the Joan C. Edwards School of Medicine at Marshall University in Huntington, West Virginia, and the Chongqing Academy of Animal Sciences & Key Laboratory of Pig Industry Sciences in Chongqing, China.

Findings were recently published in Nanomedicine. 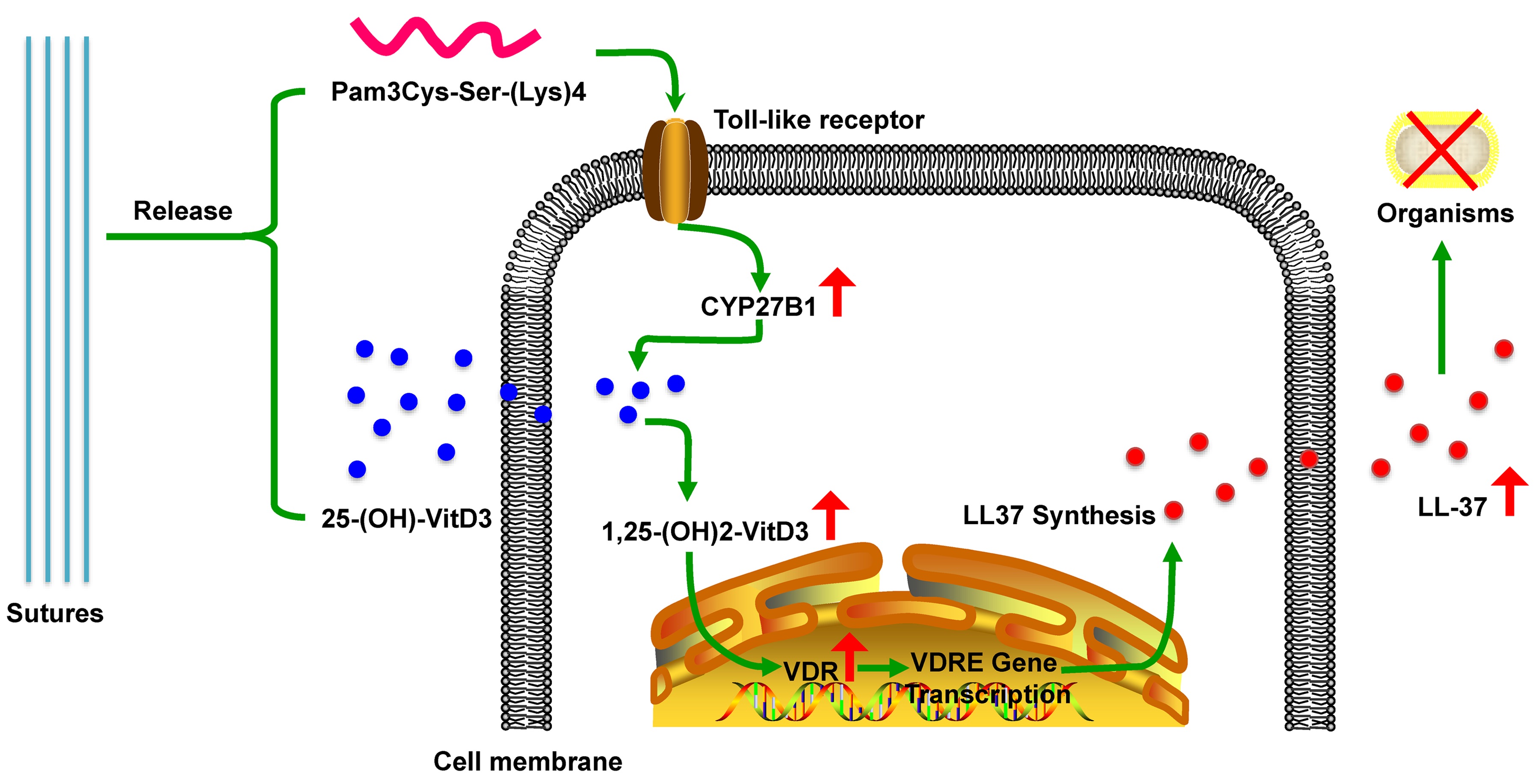