CORVALLIS, Ore. – Researchers in the Oregon State University College of Engineering have developed a battery anode based on a new nanostructured alloy that could revolutionize the way energy storage devices are designed and manufactured.

The zinc- and manganese-based alloy further opens the door to replacing solvents commonly used in battery electrolytes with something much safer and inexpensive, as well as abundant: seawater.

“The world’s energy needs are increasing, but the development of next-generation electrochemical energy storage systems with high energy density and long cycling life remains technically challenging,” said Zhenxing Feng, a chemical engineering researcher at OSU. “Aqueous batteries, which use water-based conducting solutions as the electrolytes, are an emerging and much safer alternative to lithium-ion batteries. But the energy density of aqueous systems has been comparatively low, and also the water will react with the lithium, which has further hindered aqueous batteries’ widespread use.”

A battery stores power in the form of chemical energy and through reactions converts it to the electrical energy needed to power vehicles, cellphones, laptops and many other devices and machines. A battery consists of two terminals – the anode and cathode, typically made of different materials – as well as a separator and electrolyte, a chemical medium that allows for the flow of electrical charge.

In a lithium-ion battery, as its name suggests, a charge is carried via lithium ions as they move through the electrolyte from the anode to the cathode during discharge, and back again during recharging.

“Electrolytes in lithium-ion batteries are commonly dissolved in organic solvents, which are flammable and often decompose at high operation voltages,” Feng said. “Thus there are obviously safety concerns, including with lithium dendrite growth at the electrode-electrolyte interface; that can cause a short between the electrodes.”

Dendrites resemble tiny trees growing inside a lithium-ion battery and can pierce the separator like thistles growing through cracks in a driveway; the result is unwanted and sometimes unsafe chemical reactions.

Combustion incidents involving lithium-ion batteries in recent years include a blaze on a parked Boeing 787 jet in 2013, explosions in Galaxy Note 7 smartphones in 2016 and Tesla Model S fires in 2019.

But researchers at Oregon State, the University of Central Florida and the University of Houston have designed an anode made up of a three-dimensional “zinc-M alloy” as the battery anode – where M refers to manganese and other metals.

“The use of the alloy with its special nanostructure not only suppresses dendrite formation by controlling the surface reaction thermodynamics and the reaction kinetics, it also demonstrates super-high stability over thousands of cycles under harsh electrochemical conditions,” Feng said. “The use of zinc can transfer twice as many charges than lithium, thus improving the energy density of the battery.

“We also tested our aqueous battery using seawater, instead of high purity deionized water, as the electrolyte,” he added. “Our work shows the commercial potential for large-scale manufacturing of these batteries.”

Feng and Ph.D. student Maoyu Wang used X-ray absorption spectroscopy and imaging to track the atomic and chemical changes of the anode in different operation stages, which confirmed how the 3D alloy was functioning in the battery.

“Our theoretical and experimental studies proved that the 3D alloy anode has unprecedented interfacial stability, achieved by a favorable diffusion channel of zinc on the alloy surface,” Feng said. “The concept demonstrated in this collaborative work is likely to bring a paradigm shift in the design of high-performance alloy anodes for aqueous and non-aqueous batteries, revolutionizing the battery industry.” 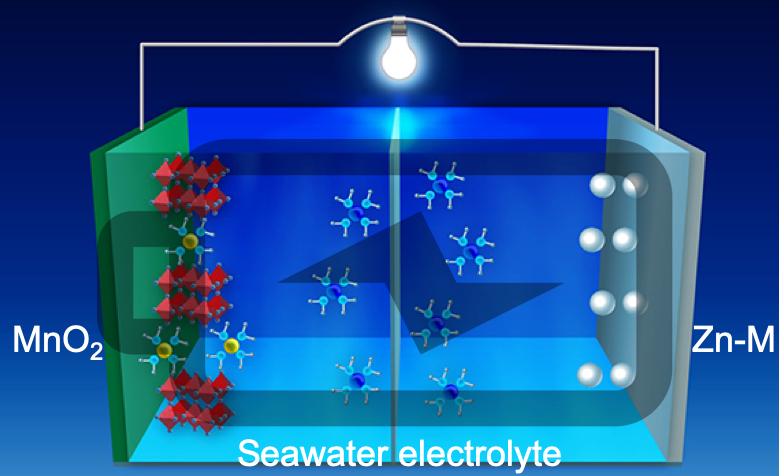