CORVALLIS, Ore. – New acoustic observations mapping the changing face of the LeConte Glacier in southeast Alaska show that the rate of submarine melt is much higher than previously predicted by scientific theory, a new study published today in the journal Science shows.

The findings suggest scientists may need to consider additional factors when predicting ice melt in glacier systems, said Oregon State University’s Jonathan Nash, one of the lead investigators on the project and a co-author of the study.

The lead author is David Sutherland of the University of Oregon., He has used a new technique for assessing the spatial distribution of melt from the underwater face of a glacier with a modified version of a marine fish finder turned on its side and pointed toward the glacier face.

Ice loss from the world’s glaciers and ice sheets contributes to sea level rise, influences ocean circulation and affects productivity in the glacier ecosystem. Changes are driven by submarine melting and iceberg calving from tidewater glaciers.

“We’re focusing on the ocean-ice interfaces, because that’s where the extra melt and ice is coming from that controls how fast ice is lost,” said Sutherland. “To improve the modeling, we have to know more about where melting occurs and the feedbacks involved.”

Over the past several decades, researchers have been working to understand the behavior of glaciers and the factors that lead to enhanced melt. One of the leading theories has been that the subglacial discharge waters – the rivers that flow beneath glaciers – emerge at the base of a glacier’s terminus and rise in energetic plumes along the glacier face, said Nash, a professor of oceanography in the College of Earth, Ocean, and Atmospheric Sciences at OSU.

“As they rise, the plumes mix vigorously and draw in warm waters from the deep ocean, pulling heat toward the glacier face,” Nash said. “Because the plumes are fast moving and can be relatively warm, they were believed to be the primary regions behind which the melt was occurring.”

But researchers in the past have relied on theory, rather than direct observation, to determine how a glacier is melting at its submarine terminus. For the new study, researchers used direct and remotely sensed observational data – a comprehensive set of ocean, ice and atmospheric data collected during the 2016-17 seasons at LeConte Glacier, which flows in the LeConte Bay near Petersburg in southeast Alaska.

“What we have learned is that the strong melt rates are not limited to the regions behind these vigorous plumes, but instead the melt is distributed across the entire face of the glacier,” Nash said.

The results align with several recent studies of glaciers that have indirectly suggested that current theory under-predicts melting, Jackson said.

“Our observations prove this in a robust way and contribute to a growing body of research that suggest that we need to revisit our basic assumptions about what controls underwater melting at glaciers around the world,” she said.

To understand more about the processes that are responsible for the increased ice melt – and as part of the same National Science Foundation-funded project, Nash and colleagues at OSU have developed a novel set of new tools to obtain the first direct observation data collected at regions very close to the ice face.

That area is considered too dangerous for manned vessels to reach, so Nash’s engineering team has developed autonomous research vessels – essentially robotic boats – that can deploy sensors in these previously inaccessible areas.

These findings could lead to revised predictions of which glaciers will retreat fastest and where and when a glacier may become unstable, Nash said. Sea-level rise projections could also be affected. The findings also highlight the importance of making new measurements at the interface between ice and ocean.

“We suspect that the net melt rates, which are controlled by both the amount of heat headed toward the ice and the amount of freshwater melt leaving the ice face, may be highly sensitive to the physics in a given region,” he said.

As a result, Nash and his engineering team, including Jasmine Narhoniak, June Marion and numerous robotics students at OSU, are continually devising new ways to get robots close to the ice.

For more information about Nash’s work, visit ross.coas.oregonstate.edu and exploreice.org/sound-of-ice.

David Sutherland, UO Department of Earth Sciences, 541-346-8753, [email protected];  Jonathan Nash, [email protected] (Note: Nash is currently on a research vessel in the Bay of Bengal; email responses may be delayed due to time differences.) 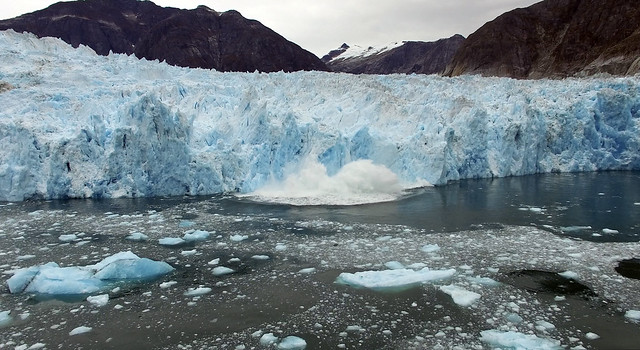