CORVALLIS, Ore. – Researchers who confirmed in recent years that salmon use the Earth’s geomagnetic field to guide their long-distance migrations have found that the fish also use the field for a much simpler and smaller-scale migration: When the young emerge from gravel nests to reach surface waters.

The study is published in the journal Biology Letters. The findings have important implications for understanding how salmon navigate across the wide range of habitats they encounter.

“From very early on in the life cycle, salmon have the ability to detect and respond to geomagnetic information,” said David Noakes, director of the Oregon Hatchery Research Center and senior author on the study. “This matters because we need to know how rearing conditions might impact the fish, particularly in the case of hatcheries – where we already have some evidence that exposure to unnatural magnetic fields can disrupt the ability of steelhead trout to orient appropriately.”

The Oregon Hatchery Research Center is a collaborative research project of Oregon State University, where Noakes is a professor and senior scientist in the College of Agricultural Sciences, and the Oregon Department of Fisheries and Wildlife. Michelle Scanlan, faculty research assistant at OSU and co-lead author on the study, said, “We show that the magnetic sense in salmon can be used for three-dimensional orientation – as a map, a compass and an indication of which way is up.”

When salmon spawn, the mothers bury their fertilized eggs in gravel “redds” where they incubate for weeks or months. Upon hatching, the young salmon remain in the gravel until they deplete residual yolk stores, after which they emerge from the gravel and live above the substrate in the open water of the stream or river.

The newly-hatched fish appear to use the direction of magnetic field lines to help determine which way is up. This finding indicates that magnetic cues are used for three-dimensional orientation across a wide range of spatial scales and habitats.

“Getting out of the gravel is not as easy as it might seem, but it is of critical importance,” said Noakes, who in previous studies examined the role of temperature, light, and water current on salmon emergence.

“All could be used by the fish, but none was essential,” he said. “In the absence of these cues, fish still moved out of the gravel. Now we have the answer to that.”

The research team constructed a system of copper-wire coils through which a very low electric current could be run to precisely control the magnetic field surrounding fish. Experiments were carried out under complete darkness and in still water.

Within the coil system, fish that were developmentally ready to move into surface waters were placed at the bottom of plastic tubes that had been filled with clear glass marbles, to mimic gravel. The researchers measured the height fish moved up in the tubes over a 30-minute period.

“Given that only inverting the magnetic field influenced fish movement, it seems salmon use the direction of field lines to orient vertically during their emergence from gravel – our findings are difficult to interpret in any other way,” said Nathan Putman, senior scientist at LGL Ecological Research Associates in Bryan, Texas, and co-lead author on the study. 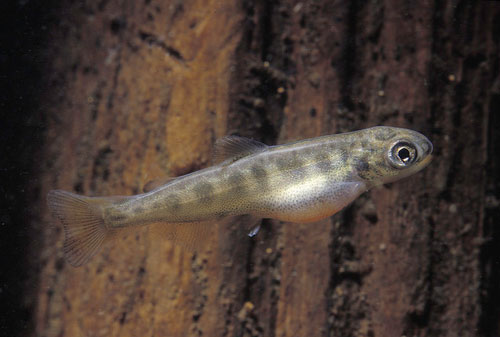