NEWPORT, Ore. – Fish are thriving and poachers are staying out of marine protected areas around California’s Channel Islands, a new population analysis by an Oregon State University researcher shows.

The analysis estimates fish populations and harvest rates based on the numbers of larger, older fish present; fewer larger fish is an indication of higher harvesting rates. Researchers found harvest rates essentially at zero for four species of kelp forest fish inside the marine protected areas between 2003 and 2017, but found much higher rates of harvesting at unprotected sites nearby.

“We expected we would find more large fish in the marine protected areas, and that is exactly what happened,” said Will White, a marine ecologist with Oregon State’s Coastal Oregon Marine Experiment Station in Newport and the paper’s lead author. “We looked at the data inside and outside the marine protected areas and we found that there is no evidence of fishing inside the boundaries, but there is a lot of fishing going on just outside the boundaries.”

The study is believed to be the first to directly assess whether marine protected areas have eliminated harvesting of fish inside their boundaries, said White, who is also an assistant professor in the OSU College of Agricultural Sciences’ Department of Fisheries and Wildlife.

The findings were published in the journal Conservation Letters. Co-authors include Mark Yamane, an undergraduate student participating in a National Science Foundation-sponsored research experience at Hatfield Marine Science Center; Kerry Nickols of California State University, Northridge; and Jennifer Caselle of the University of California, Santa Barbara. The research was supported by the National Science Foundation and the David and Lucile Packard Foundation.

The state of California first established a network of 13 marine protected areas around the northern Channel Islands off the coast of southern California in 2003.

Marine protected areas that restrict or prohibit the harvest of wild populations of fish or other sea life are seen as a way to help replenish populations that have been overfished. They are an increasingly popular tool for fisheries management around the United States and throughout the world.

The assumption is that harvesting ceases in the protected areas, but determining if or how much illegal harvesting, or poaching, is occurring has been a challenge for researchers, which led White to develop a new method for analyzing fish populations.

The Partnership for Interdisciplinary Studies of Coastal Oceans, or PISCO, has been conducting long-term surveys of kelp forests along the West Coast for more than 20 years. PISCO researchers surveyed fish populations throughout the Channel Islands, both inside and outside the current marine protected areas, each year from 1999 through 2017.

White used that repository of data to develop the new analysis, which estimates harvest rates based on the number of larger, older fish present at a given time. The researchers were able to compare fish populations of four species of kelp forest fish year-over-year after the marine protected areas were in place.

“People are fishing where they are supposed to,” White said, “but that may have additional repercussions.”

The new analysis could be a useful tool for understanding the effectiveness of marine protected areas at a time when fisheries management officials in California and Oregon are preparing to embark on evaluations of their programs, White said. The state of California is expected to begin its review in 2022 and Oregon in 2023. 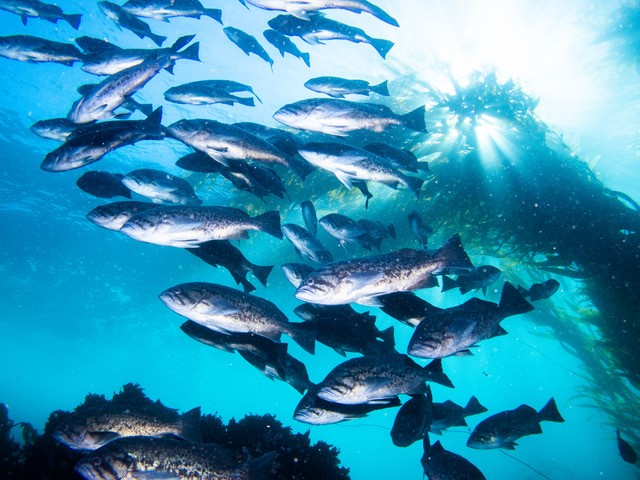