CORVALLIS, Ore. – Louis Ignarro, a Nobel laureate whose research advanced treatments for heart disease as well as impotence, will deliver the keynote address at the Linus Pauling Institute’s biennial conference on the contributions of vitamins, minerals and natural products on human health.

Ignarro’s keynote lecture is geared to the general public and will be held at 4:30 p.m. on Friday, Aug. 16. His talk, “The Road to Stockholm – A Nobel Mission,” will focus on his personal journey from humble beginnings to Nobel Prize winner and will take place at the LaSells Stewart Center, 875 SW 26th St., Corvallis.

Ignarro earned the Nobel Prize in Physiology or Medicine in 1998 and is best known for his discoveries regarding nitric oxide as a signaling molecule in the cardiovascular system. That same year, he was inducted into the National Academy of Sciences and the following year, into the American Academy of Arts and Sciences. Nitric oxide is indirectly involved in the action of some drugs, such as Viagra, that treat impotence.

Ignarro, a Brooklyn-born son of Italian immigrants, studied chemistry and pharmacology at Columbia University and earned a doctorate at the University of Minnesota. He has been on the faculty of UCLA since 1985.

OSU alumnus and two-time Nobel laureate Linus Pauling in 1973 founded the institute that bears his name to carry out research into how vitamins and other micronutrients might improve the public’s health. The Linus Pauling Institute has been based at Oregon State since 1996.

The biennial Linus Pauling Institute conference will be held Aug. 14-16 at the CH2M Hill Alumni Center and features scientific presentations on dietary supplements such as vitamins, minerals and plant-derived compounds, and the role of reduction-oxidation signaling in diseases like cancer and neurodegeneration.

This is the 10th biennial conference and is a joint effort with the Society for Redox Biology and Medicine.

Ignarro’s keynote will be preceded by a reception and open house where attendees can learn more about research happening across Oregon State. The reception begins at 3:30 p.m. in the foyer of the LaSells Stewart Center.

The reception and lecture are free but those wishing to attend must register online to reserve their seats.  A limited number of tickets to the conference dinner can be purchased for $65 per person by contacting the Linus Pauling Institute at 541-737-5075 or lpi@oregonstate.edu.

Research programs at the Linus Pauling Institute investigate the role vitamins, minerals, and chemicals from plants play in human aging, immune function and chronic disease. Their goal is to understand the mechanisms by which components of our diet and/or dietary supplements may affect disease progression and to evaluate their usefulness in disease prevention. 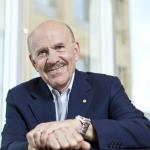