CORVALLIS, Ore. – Richard “Rick” Spinrad, an Oregon State University professor and former OSU vice president for research, has been nominated by President Joe Biden to serve as Under Secretary of the U.S. Department of Commerce and Administrator of the National Oceanic and Atmospheric Administration.

The White House announced Spinrad’s selection today. His appointment must be confirmed by the U.S. Senate.

“I am deeply honored by this nomination,” Spinrad said. “From my days as a graduate student at OSU, I always held NOAA in such high regard for the quality and importance of its work. The opportunity to serve as NOAA Administrator is both humbling and exciting.”

Spinrad, who served as NOAA’s chief scientist from 2014 to 2016 during the Obama administration, would be the third person from Oregon State University to lead NOAA, the federal scientific agency whose mission is to understand and predict changes in climate, weather, oceans and coasts and to conserve and manage coastal and marine resources.

“Rick Spinrad will be an outstanding administrator of NOAA,” said Edward Feser, OSU’s acting president and provost and executive vice president. “He’s among an impressive group of Oregon State University faculty who have held high-ranking federal appointments – recognition of the university’s academic distinction and land grant commitment to action. His nomination and NOAA’s past leadership by John Byrne and Jane Lubchenco are evidence of Oregon State University’s global leadership in the study of climate, climate change, the world’s oceans and marine and coastal resources.”

Spinrad is an internationally recognized scientist and executive with more than 35 years of experience who served four years as OSU’s vice president for research before stepping down in 2014 to serve as NOAA’s chief scientist.

During his tenure in the OSU research office, Spinrad led the launch of Oregon State University Advantage, which is designed to boost the university's impact on job creation and economic progress in Oregon and beyond. The program has increased access by private industry to OSU's faculty and researchers and allows companies to take better advantage of the university's unique capabilities.

Spinrad also played an integral role in the launch of the Regional Accelerator and Innovation Network known as Oregon RAIN and the selection of OSU - along with public and private partners in Alaska and Hawaii - to run a center to investigate the civilian use of unmanned aerial vehicles.

A resident near Sisters in Central Oregon, he returned to OSU in 2016 and is a professor of oceanography in the College of Earth, Ocean, and Atmospheric Sciences and senior adviser to the vice president for research, where his responsibilities include a focus on funding for the PacWave wave energy test site project.

Before coming to OSU, Spinrad was assistant administrator for research at NOAA. He also has been a research director for the U.S. Navy; taught oceanography at two universities; directed a major national non-profit organization; served as president of a private company; and worked as a research scientist.

He is the recipient of Presidential Rank Awards from Presidents George W. Bush and Barack H. Obama. Spinrad is past president of The Oceanography Society and the Marine Technology Society. He is a fellow of the American Meteorological Society, MTS and the Institute of Marine Engineering, Science and Technology.

Spinrad received his master’s and doctoral degrees in oceanography from OSU. 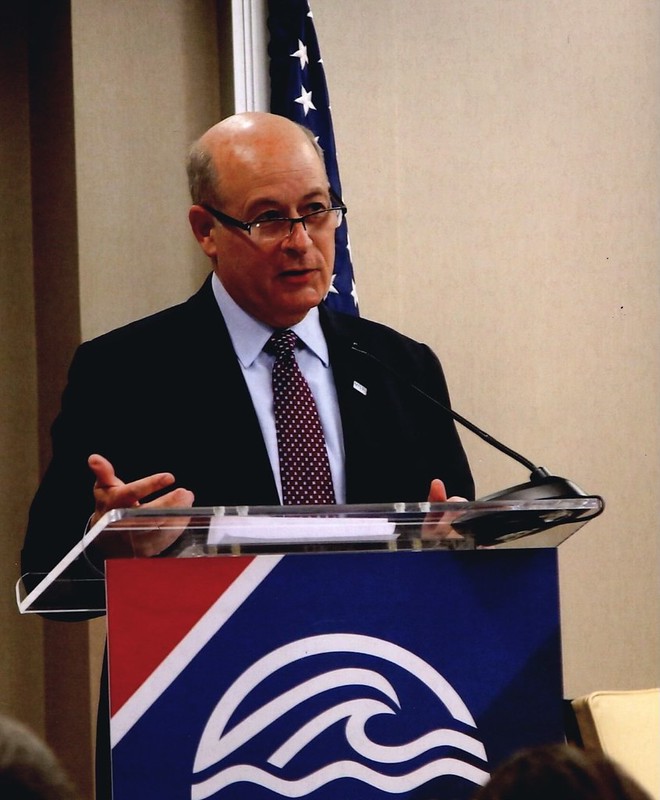