CORVALLIS, Ore. – Oregon State University researchers have described a new legume tree from flowers embedded in several lumps of amber recovered from deep within an amber mine in the mountains of the Dominican Republic.

OSU’s George Poinar Jr. and Kenton Chambers placed the 20- to 30-million-year-old flowers in a novel genus and species, Salpinganthium hispaniolanum, in the family Fabaceae.

“The flowers are quite striking with their spreading sepals and petals, along with the 10 extended stamens,” said Poinar, an international expert in using plant and animal life forms preserved in amber to learn about the biology and ecology of the distant past. “While now darkened with age, the petals were probably white, yellow or even pink, which are the petal colors of the closely related purpleheart tree, whose strong, durable, purplish wood is prized by artists, ship builders, furniture makers and other crafts people.”

Groves of purpleheart trees continue to grow along rivers in tropical rain forests in Central and South America, particularly in the Amazon basin, said Poinar, professor emeritus in the Oregon State College of Science.

Poinar and Chambers, professor emeritus in the OSU College of Agricultural Sciences, derived the name of the genus from the Greek words for tube, trumpet and flower. The species name is based on the Caribbean island, Hispaniola, where the fossil originated.

“While purpleheart trees are still with us, Salpinganthium trees have disappeared,” said Poinar. “We can only speculate about why these fossil trees have become extinct.”

They could have succumbed to some unique biological and/or physical events, such as the loss of a pollinator, presence of a pathogen or climatic change that ravaged populations throughout their entire range, Poinar said. Finding their flowers in five separate pieces of amber shows that they were well established in the Dominican amber forest, he added.

Poinar and Chambers placed Salpinganthium hispaniolanum, the latest in a number of flowers described by the authors from Dominican amber mines, in the resin-producing tribe Detarieae; the tribe’s members have sepals and petals dotted with glands.

“Another member of this tribe, Hymenaea, produced the resin that became the world famous Dominican amber,” Poinar said.

The study was published in the Journal of the Botanical Research Institute of Texas. 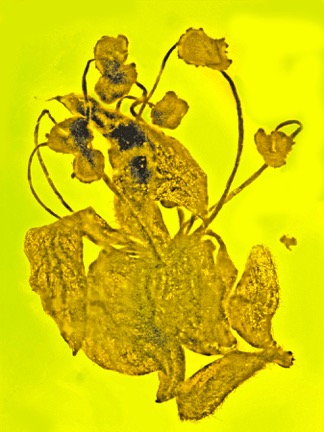 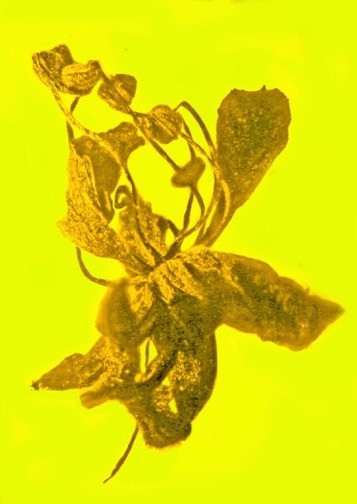