CORVALLIS, Ore. – World governments and other leadership bodies are taking vital steps to protect the ocean but more progress is urgently needed, Oregon State University scientists reported today at the Our Ocean Conference.

An OSU analysis, led by marine ecologists Kirsten Grorud-Colvert and Jane Lubchenco, shows that more than one-third of the ocean area currently under protected status is the result of the annual, high-profile meeting.

The Our Ocean Conference was established in 2014 under the leadership of then U.S. Secretary of State John Kerry. The meeting brings together global leaders of governments, industry, youth and civil society to tackle problems that threaten the health of the ocean. The goal is to commit to action that protects and restores ocean ecosystems and allows them to be used sustainably.

Grorud-Colvert, Lubchenco, post-doctoral scholars Katherine Dziedzic and Jenna Sullivan-Stack, and graduate student Vanessa Constant, all of Oregon State’s College of Science, presented their findings today at the sixth annual Our Ocean Conference taking place in Oslo, Norway. The presentation included a road map for sustaining the momentum of ocean protection.

“The Our Ocean Conferences’ very public focus on accountability seems to be paying off,” said Grorud-Colvert, assistant professor of integrative biology at OSU and the analysis’ lead author. “Fifty-seven percent of marine protected area commitments from the conference have been completed, and 40% of the rest show some progress. Now is the time to support the completion of every commitment.”

Over the last five years of the Our Ocean Conference, participating bodies have made more than 1,000 conservation promises in total. These span efforts to reduce ocean pollution, tackle illegal fishing, support sustainable food from the sea and protect livelihoods.

“We founded the Our Oceans Conference as a forcing mechanism to drive meaningful oceans protection on a more aggressive timeline, and to create new urgency that lasts throughout the year,” Kerry said. “The findings in this report tell us this conference is driving meaningful action but we know our work is not done.”

Nearly 200 of the conservation pledges are to establish, fund or enhance marine protected areas. They include promises to create more than 13 million square kilometers of protected areas and financial commitments to ocean actions in excess of $17 billion.

“If all of the current Our Ocean Conference’s protected-area pledges were completed, 3.6% of the ocean would be protected, including 1.2% categorized as either ‘fully’ or ‘highly’ protected,” said Lubchenco, an OSU distinguished professor. “Major progress has been made in ocean protection as a result of the Our Ocean Conferences. The conferences are clearly succeeding in elevating the ocean on the international diplomacy stage. They are also showing success in broadening ownership for ocean action across sectors and increasing the financial, technical and other resources directed toward ocean action.”

Adding the areas protected as a result of the Our Ocean Conference to other existing protected areas means that 4.8% of the global ocean area is now protected, and participating countries have agreed to protect 10% of the ocean by 2020.

The 10% target recognized that most of the ocean used to function as a protected area because it was too remote and inaccessible to exploit routinely. But with modern technology allowing extraction almost everywhere, protected areas have emerged as an important tool.

Protecting the ocean is critical for a range of ecological, social and economic reasons, including the ocean’s role in combating climate change.

“In 2016, a whole group of countries picked up the baton from the United States and Chile and committed to keep this movement growing,” Kerry said. “It has and that’s a tribute to countries that know this is an existential issue. But just as the threats to the ocean have grown, so must collaborative efforts to keep this a conference of actions not words and to ensure we’re tracking and growing progress to keep up with what the science says we must do.”

Dziedzic noted that while the amount of protected area is important, just as important if not more is the level of protection and what has actually been implemented on the water.

“The level of protection largely determines the outcomes – the conservation, fishery and climate benefits,” she said. “We need to be really clear on the link between protection levels and outcomes as we drive toward the emerging goal of at least 30% of the ocean in implemented fully and highly protected areas by 2030.”

Based on their findings, the OSU researchers outlined five recommended actions for world leaders who have made or will make ocean protection commitments:

“We’re emphasizing the urgency of accurate tracking and reporting if the Our Ocean Conferences are to fully live up to their promise of delivering meaningful ocean action,” Grorud-Colvert said. “The conferences have already made an incredible contribution toward improving the health of the ocean and the billions of people that depend on it. With enhanced accountability and tracking, the impacts will be even greater.” 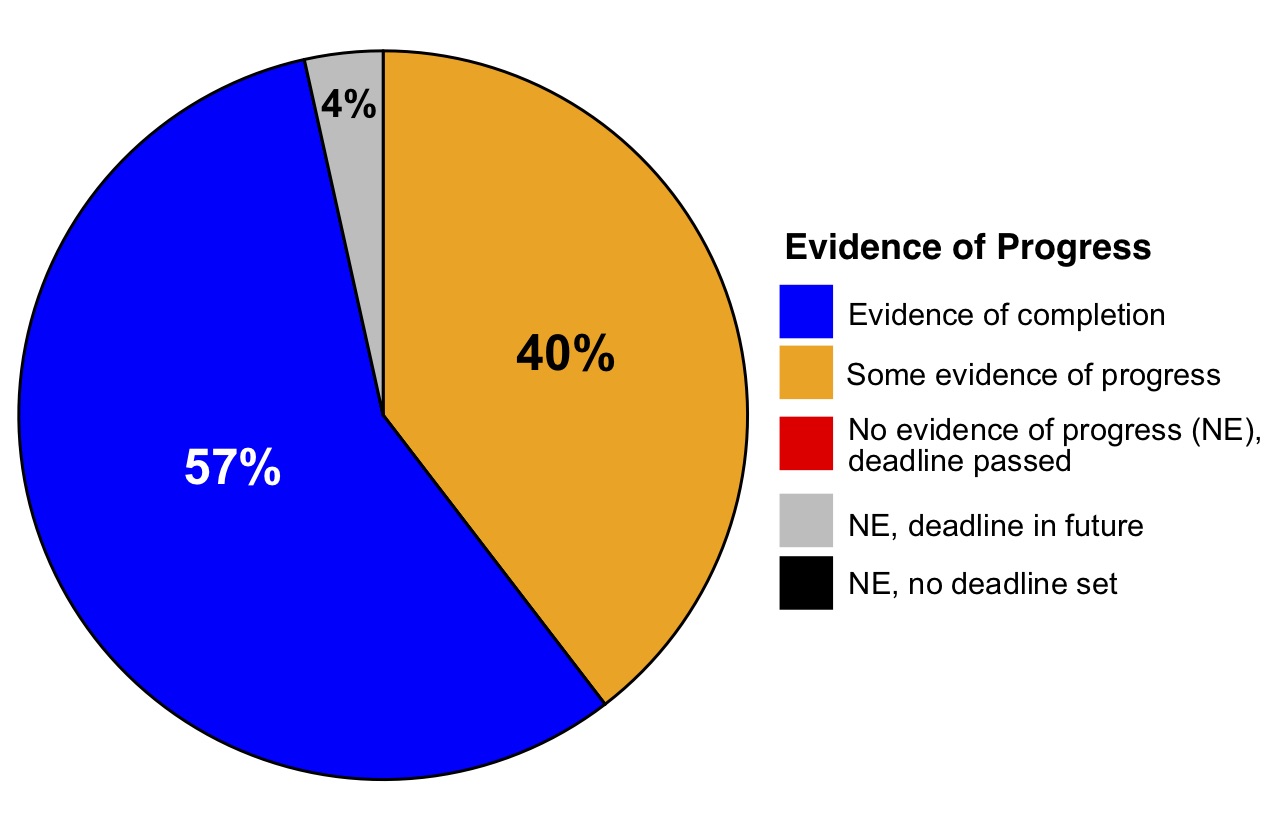 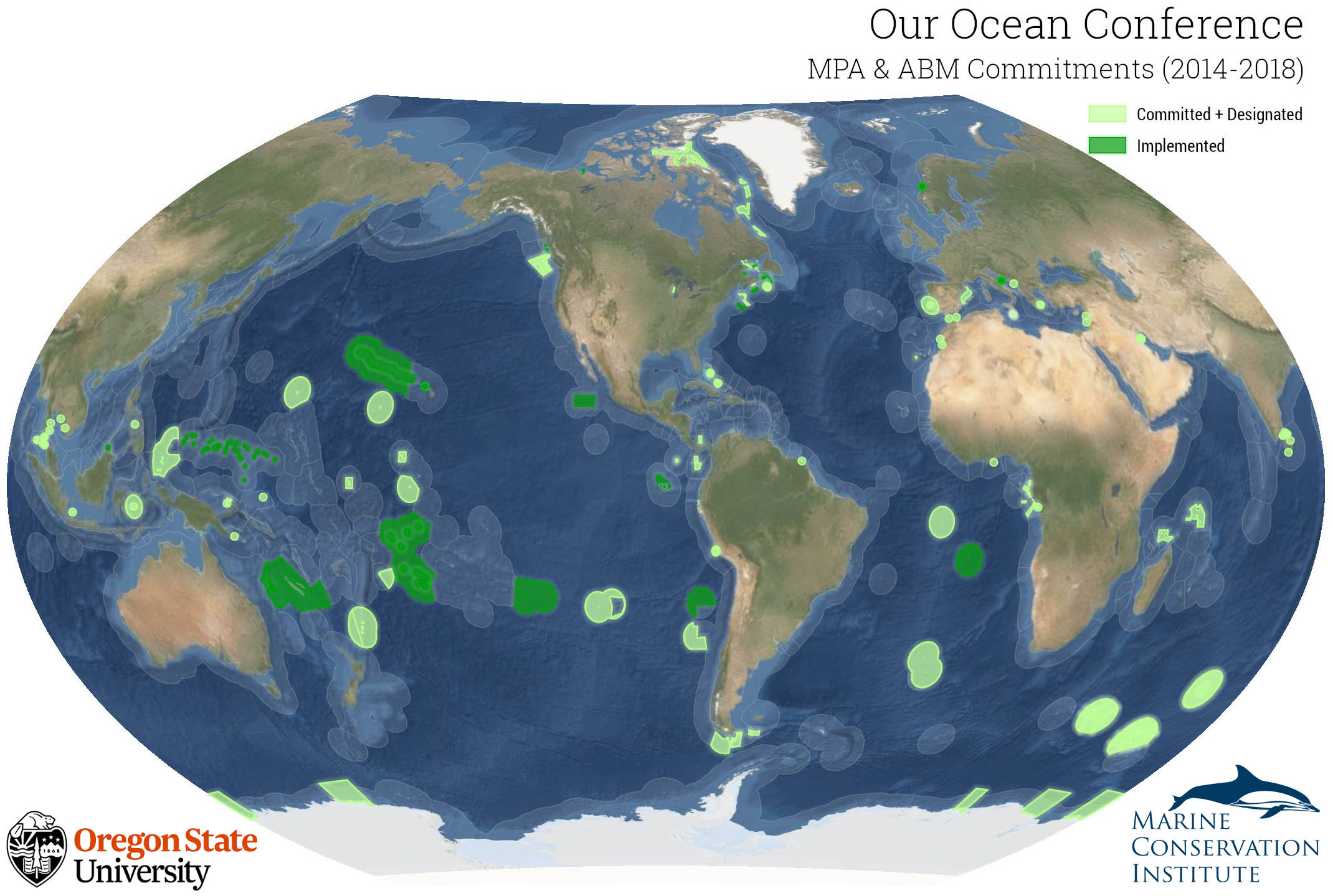