CORVALLIS, Ore. – A team from Oregon State University is the first college student group in Oregon to fire a liquid bipropellant rocket engine and one of eight finalists in a $1 million competition to send a rocket to outer space, 100 kilometers from the Earth.

The students are members of the College of Engineering’s High Altitude Liquid Engine team, or HALE, and are competing in the Base 11 Space Challenge.

Much like President Kennedy’s challenge to the United States to land on the moon by the end of the 1960s, the Base 11 contest is straightforward and deadline oriented: Be the first student-led rocketry team to get a liquid-propelled, single-stage launch vehicle to the Kármán line – the border between the Earth’s atmosphere and outer space – and recover it, by the end of 2021.

Base 11 is a nonprofit STEM workforce and entrepreneurship accelerator. Sponsored by the National Rocketry League, a Base 11 subsidiary, the Space Challenge kicked off in fall 2018 with teams from 89 institutions. Each strove to advance by meeting regular reporting, design and construction benchmarks, and now only eight remain.

As its name implies, a liquid bipropellant rocket uses two separate propellants, HALE team member Muriel Hayden explains; a liquid fuel and a liquid oxidizer. In a bipropellant system, the fuel and oxidizer are stored in separate tanks, fed through a network of tubes and valves and mixed in a combustion chamber, where they are ignited to create thrust.

More complex than solid propellant engines, liquid propellant engines allow for the control of propellant flow to the combustion chamber – meaning the engine can be throttled, as well as stopped and restarted. There are many types of liquid fuels; HALE’s engine uses kerosene, with liquid oxygen, or LOx, as the oxidizer.

Hayden, who holds an undergraduate degree in mechanical engineering from OSU and expects to earn her master’s diploma next month, said HALE arose from two primary factors: passionate students seeking a challenge, and feedback from industry.

“With the growth of Oregon State’s American Institute of Aeronautics & Astronomics program, we recognized the importance of establishing a liquid rocketry program at OSU to remain competitive in the aerospace industry,” she said. “It was an opportunity for a lot of firsts both at OSU and in the state of Oregon.”

As with many student teams, the group’s composition has changed as students have graduated and moved on – such as test stand designer, builder and operator Adam Ragle, now working for SpaceX, and Base 11 liaison manager Olivia Clark, now of Blue Origin – but the team typically has included six graduate students and four four-person sub-teams of undergraduates.

“We don’t have a designated leader,” said Hayden, who will also join SpaceX upon graduation. “Our team is unique in that the grad students have run it as a committee. We started this program without the infrastructure that a lot of schools had, so we’ve had to build a lot of things in parallel.”

HALE is at work on a new engine, Mira 2, based on the same design and with the same overall thrust of the one that was test fired April 13, but easier to manufacture and assemble and with improved injector cooling.

That engine will be tested in a vertical configuration prior to, if things go well, a test launch with the goal of getting a vehicle to 30,000 feet as a step toward what HALE hopes will culminate in a $1 million flight to 100 kilometers.

If all of that sounds like a lot to accomplish in the final six months of Base 11’s original time frame, it is; that’s why Hayden and others are optimistic that, given the added difficulties of trying to design and build a rocket during a pandemic, Base 11 will allow the contest to run beyond 2021.

“Our hope is that we have our vertical test stand built and complete major upgrades to the horizontal test stand before the end of the year so we can test our Mira 2 engine,” she said.

“Dr. Squires pulled together mentors from industry and alumni and helped to secure our program at OSU,” Hayden said. “She was an incredible mentor and a second mother to many. ‘Ad astra!’ embodies the light she shined on so many. The phrase represents the dreams and aspirations she held for each and every person in her life, and helps to sustain the passion and dedication she so effortlessly and lovingly shared.” 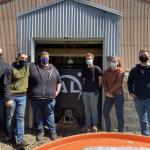