On the origin of the word ‘oops’

CORVALLIS, Ore. – While researching a book on the cultural history of animal diseases, Ray Malewitz encountered a reference to the Great Epizootic of 1872, the most widespread and destructive horse flu epidemic in North American history.

During the same research, Malewitz, an associate professor in the School of Writing, Literature, and Film at Oregon State University, came across the word “ooperzootics,” which he came to learn means a fit of craziness in humans.

This led him to wonder: Are these two words related to the word “oops?”

He consulted the Oxford English Dictionary. The editors note that oops may be a shortened version of “up-a-daisy and later “upsidaisy,” which adults since at least the 18th century have cooed when propelling small children in the air. The first known use of the word “oops,” dictionary editors recorded, occurred in a humorous horse racing column in the Washington Post in 1921.

“A horse racing column,” Malewitz remembered thinking. “I thought that was strange. Horses keep coming up.”

He dug deeper. Working with Anne Bahde at the Special Collections & Archives Research Center at Oregon State, Malewitz searched digitized newspaper collections for all references to the word “oops” beginning in 1872.

That search revealed the gradual shortening of the word “ooperzootics” to “oops” between 1872 and 1921. In keeping with equine history, Malewitz also uncovered a cartoon from 1909 that depicted a disoriented horse shouting “Whee!-Oop” after ingesting locoweeds, which produce a toxin harmful to the animals.

In a recent paper “On the Origin of “Oops!”: The Language and Literature of Animal Disease,” which was published in the journal Critical Inquiry, Malewitz argues that the horse’s exclamation connects to newly coined viral phrases of the time, including “ooperzootics” and the related “oopazooty.”

Both phrases, he shows, are variants of the veterinary terms “epizooty,” a widespread disease affecting animals,” and “epizootic,” an adjective that describes the disease, which were popularized by the Great Epizootic of 1872.  Because this epizootic ground horse-driven transportation to a halt, humans were often thrust into positions of animals—pushing carts and dragging trams around American cities.

This cross-over of animal and human worlds led to a great deal of surprise and laughter on the streets, and, he argues, a new world to express this surprise. Given the long-standing association between horses and epizootics or ooperzootics, Malewitz argues it is reasonable to assume that oops entered the English language by way of this animal disease before migrating to its current usage as a marker of human foibles.

He plans to let the editors of the Oxford English Dictionary know of his findings with hopes they will update their dictionary entry for oops.

Malewitz’s ongoing research brings together his interests in the creative intersection of the liberal arts and natural sciences. His forthcoming book will offer a historical framework for understanding current disease outbreaks in animals, including avian flus, white nose syndrome in bats and chronic wasting disease, which impacts deer, elk and moose.

In an era of rapidly changing climate, these epizootic outbreaks are expected to increase as animals respond to changing geological conditions by changing their migration patterns and in the process encountering new kinds of illnesses. According to Malewitz, these changes are leading many people to rethink our ethical responsibilities towards the animals in our communities.

Malewitz understands the “oops” story is also about the goofiness of word origins. But, he hopes it will make people think about the enduring, often surprising, connections between the lives of humans and the lives of animals.

“I don’t believe this will change the world, but I hope this strange story of an everyday word will get people to consider how animal diseases have shaped and will continue to shape our culture,” he said. 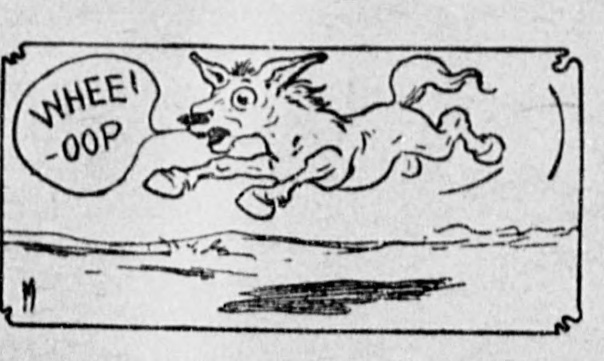