The webcast event is part of the college’s American String Series. Hosted by OSU Director of Popular Music and Performing Arts Bob Santelli, each segment of American Strings is comprised of a conversation and solo performance by successful artists from a variety of genres.

Flemons is a multi-instrumentalist, producer, actor, music scholar, historian and record collector. As part of the Carolina Chocolate Drops, he won a Grammy Award in 2010 for their folk album “Genuine Negro Jig.” His 2018 Grammy Award-nominated album “Dom Flemons Presents Black Cowboys” explored the often overlooked history and folk music traditions of Black cowboys in the West, which he says reflect some of his own family’s legacy.

He also has received two Emmy Award nominations. In 2020 he was selected for the prestigious United States Artists Fellowship Award for the traditional arts category, supported by the Andrew W. Mellon Foundation.

With a repertoire covering more than 100 years of early American popular music, Flemons has earned the moniker “The American Songster.” He is considered an expert player on the banjo, guitar, harmonica, jug, percussion, quills, fife and rhythm bones.

His latest project, “Prospect Hill: The American Songster Omnibus on Omnivore Recordings,” features the original “Prospect Hill” album, the 2015 EP “What Got Over,” and “The Drum Major Instinct,” complete with 12 previously unissued instrumental tracks.

This American Strings webcast is free to view, but registration is required. To register and receive your link to view online, go to: https://beav.es/JT3. 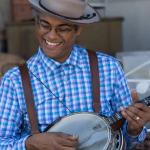 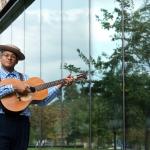