The OSU entry posted the top score in each of four individual categories en route to the overall championship in the Canadian International Rover Challenge held in the Canadian Badlands near Drumheller, Alberta.

Entrants included teams from Harvard and the University of Washington as well as Poland and Canada.

The OSU Robotics Club is a student group affiliated with the Collaborative Robotics and Intelligent Systems Institute in the College of Engineering, one of five doctorate-granting robotics programs in the U.S.

Taking advantage of that expertise in robotics, on Oct. 23 OSU will host a free, daylong symposium, The Promise and the Peril of Artificial Intelligence and Robotics, as part of its ongoing 150th anniversary celebration. Registration is now open.

“The Oregon State team in past years had attended the University Rover Challenge in Utah and the Sample Return Robot Challenge in Massachusetts,” Davidson said. “Having some very talented team members who were able to leverage their skills and experience gained from working in OSU research labs and elsewhere was a big key, as was access to work space and other College of Engineering resources.”

In Drumheller, part of the Red Deer River Valley that’s known internationally for its abundance of dinosaur fossils, the OSU team won every category – prospecting, resource extraction, equipment servicing, and search and rescue – by a wide margin on the way to an overall winning score of 278.08 points in the four-day competition, which wrapped up Aug. 13.

Oregon State’s point total was nearly double the second-place score posted by a team from Poland’s Bialystok University of Technology.

“The competition was extremely well organized and one of the most striking aspects of the event was the unusual landscape of the Canadian Badlands,” Davidson said. “Also, how many dinosaur statues and images Drumheller has – they’re everywhere.” 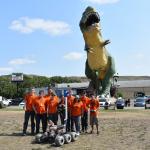 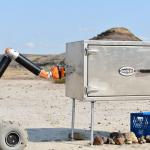 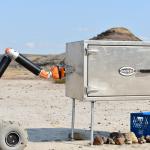